The Day They Moved Australia! 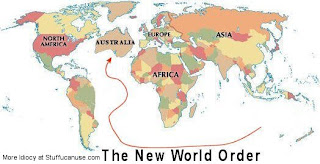 For some reason, when I spotted the am news alert from the Sydney Morning Herald in my inbox, the first thought after, well it's bedtime, was of an article I came across a couple of years back. It was so funny that I saved the pic and now I've managed to find the article again!

"Tired of being isolated and ignored, Australia decides to move"

"After what witnesses described as an all night blinder during which it kept droning on about how it was always being bloody ignored by the whole bloody world and would bloody well stand to do something about it, Australia this morning woke up to find itself in the middle of the North Atlantic.

According to Australians and residents of several countries destroyed or lewdly insulted during the continent's nearly 7,000-mile saltwater stagger, the binge began just after noon yesterday at a pub in Brisbane, where several patrons were discussing Australia Day (Jan. 26) and the nation's general lack of respect from abroad.

"It started off same as always; coupla fossils saying how our Banjo Patterson was a better poet than Walt Whitman, how Con the Fruiterer is funnier than Seinfeld, only they're Aussies so no one knows about 'em," recalled witness Michael Ewen. "Then this bloke Martin pipes up and says

Australia's main problem is that it's stuck in Australia, and everybody says 'Too right!'"

"Well, it made sense at the time," Ewen added.

By 2 a.m., powered by national pride and alcohol, the 3-million-square-mile land mass was barging eastward through the Coral Sea and crossing into the central Pacific, leaving a trail of beer cans and Chinese take-aways in its wake.

When dawn broke over the Northern Hemisphere, the continent suddenly found itself smack in the middle of the Atlantic, and according to most of its 19 million inhabitants, that's the way it's going to stay.

Officials on both sides of the Atlantic conceded that would be difficult. "They broke Florida," said U.S. State Department spokesman Richard Boucher. "And most of Latin America is missing."

Meanwhile, victims of what's already been dubbed the "Australian Crawl" are still shaking off the event.

"Australia bumped into us at about midnight local time," said the Spanish President Juan Carlos. "They were very friendly, they always seem friendly but they refused to go around unless we answered their questions. But the questions were impossible! Who is Ian Thorpe? Do you have any Tim Tams? What day is Australia Day?'"

"Fortunately, somebody here had an Unimportant World Dates calendar and we aced the last one," President Carlos added.

By late morning today, however, not everyone in Australia was quite so blithe. "We've still got part of Jamaica stuck to Queensland," said Australian army commander Lt. Gen. Peter Cosgrove. "I think we might have declared war on it. I don't bloody remember. Maybe it's time to go home."

Cosgrove, however, is not in the majority, and at press time, U.S., African, and European leaders were still desperately trying to negotiate for Australia's withdrawal. But the independent-minded Aussies were not making it easy.

In a two-hour meeting at midday, Australian representatives listed their demands:

New Zealand awoke this morning to find itself as the lone superpower in the South Pacific, after Australia moved north during the night.

"About Bloody time too" stated the Prime Minister Helen Clarke. "we have had just about enough of the whiners and were considering allowing Ngai Tahu to invade them and claim Queensland.

Look out Northern Hemisphere, you don't know what you are in for. They steal your entertainers, claim anyone who even visit them as their own, and inflict their sports teams on them. We will be better off working with Samoa"

Popular opinion is that New Zealand moves to occupy Australia's place as the weather is better.

No report has come from Tasmania. It is believed that Australia left quietly so Tasmanians wouldn't notice and want to follow. It appears the ruse has worked. New Zealand has offered to adopt Tasmania as West New Zealand."