Well, what would I like to see in a reconstruction of the events of May 3rd 2007, when Madeleine McCann was reported missing, having mysteriously disappeared from her family's holiday apartment in Praia da Luz?

First of all, the child that Jane Tanner reported that she saw being carried by the alleged abductor. The child chosen to take the part would have to be the same height as Madeleine was said to have been at the time: 90cms. I can't quite believe that she was that small, but that's the height that was given out in a description by her parents. So, that's the height the child should be.

Then there's those pyjamas! I doubt that Marks and Spencer has the identical pyjamas still on sale, but the basic style is popular and so should be easy to come across. Kate can let the police know the size, I am sure, although the size Madeleine was wearing is probably a matter of record.

So, the child should be the same height and wearing pyjamas just like these ones.

And she should be carried just as described by Jane Tanner, as seen in the image below, which Jane Tanner verified as a good likeness of the alleged abductor and correct for the way the child was being carried.

But, can someone tell me, just a simple explanation will do, how the pyjamas being held up by Kate and Gerry McCann could end up looking like those in the image verified as accurate by Jane Tanner?

How could baggy, cropped leg pyjamas end up tightly around the ankles? Those pyjamas would ride up to the knees on a child being carried like that.

This is one of the very first inconsistencies that could be shown up in a reconstruction of the events. If Jane Tanner did see a man carrying a child in that manner, wearing pyjamas as shown in the image she accepts as an accurate representation, then it wasn't Madeleine McCann whom she saw.

There could be several explanations for the inconsistency:

2) She did see a child being carried, but it wasn't Madeleine and under the sodium street lights, she was confused about colour and the pyjamas weren't pink.

3) It was Madeleine and Kate and Gerry lied about what she had been wearing that night.

However, as Jane Tanner slip-slapped her way up the alleyway, in her flip-flops, and apparently passed very close to Gerry McCann and Jez Wilkins, neither of the two men saw her.

So, were any of those three lying? Rather seems like it. Who and why? They can't all be telling the truth? And Marks and Spencer's pyjamas are like dogs in a way: they don't lie!

I think there has to be a reconstruction of the events so that this and other inconsistencies can be addressed. This would be the best possible start, in my opinion, to finding out what happened to Madeleine.

Video #2 in the "Discrepancies," series by HiDeHo 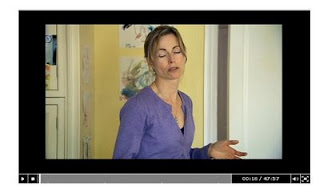 Re-writing the story of "How I knew that Madeleine had been taken."

I did my check about 10.00 'clock and went in through the sliding patio doors and I just stood, actually and I thought, oh, all quiet, and to be honest, I might have been tempted to turn round then, but I just noticed that the door, the bedroom door where the three children were sleeping, was open much further than we’d left it.

I went to close it to about here and then as I got to here, it suddenly slammed and then as I opened it, it was then that I just thought, I’ll just look at the children and I could see Sean and Amelie in the cot and then I was looking at Madeleine’s bed which was here and it was dark and I was looking and I was thinking, is that Madeleine or is that the bedding.(See image below) and I couldn’t quite make her out. It sounds really stupid now, but at the time, I was thinking I didn’t want to put the light on cos I didn’t wanna wake them and literally, as I went back in, the curtains of the bedroom which were drawn,… were closed, … whoosh … It was like a gust of wind, kinda, just blew them open and Cuddle Cat was still there and her pink blanket was still there and then I knew straight away that she had, er, been taken, you know.

Above: photo of Madeleine's bed from the police files. It was perfectly flat, as though it hadn't been slept in. What was there that Kate McCann could have mistaken for the bedding or Madeleine? Perhaps if the bedding had been bunched up, she could have wondered what the bulge was, but there's no bulge.

And here we have Kate McCann talking to Piers Morgan with a greatly embellished account of how she knew!

PM: What was the exact moment...I'll ask you Kate...when you realised that Madeleine was gone?

KMcC: Well, I went back to do a check at ten o'clock, emm...and I went through the patio doors at the back..emm...and I listened for a minute in the living room and it was all quiet. And I just noticed that the...the door to the children's bedroom was quite far open and we always leave it so that it's slightly ajar, just to let a little bit of light in. And..emm...I thought to myself, did Matt leave the door open at half nine...errr... because Matt checked on them at half nine...emm..and I thought that must be what happened.

Emm...so I went to close over the children's door and just as I was about to close it, there was a..it kind of slammed, like a gust of wind had shut it. And then I thought, did I leave the patio doors open? (So, she didn't think I'll just take a look at the children at this point?) So I just checked (Didn't mention that before) and they were closed. And then I went back just to open the door a little bit (Not to look at the children?) and just as I was doing that, (So, incidental to closing the door?) I just...emm...I just glanced at Madeleine's bed (Not..oh there's the twins in their cot? And you didn't hallucinate a flat bed into bunched up bedding or a child?) which was by the wall. and it was really dark and I couldn't make her out. And I just kept looking for what felt like minutes, thinking, you know, where is she?

At this point in the original telling, when the door was opened for a second time, the curtains went whoosh!

And it seems daft now because normally you'd think I'd put the light on. It's that inbuilt thing of don't wake the kids up...emm...and then I looked and realised she wasn't there and I thought, so has she gone through into our bedroom?

No, this was where Kate McCann told us previously that she knew Madeleine had been taken because the curtains went whoosh and Madeleine's bed was empty, apart from her pink blanket and Cuddle Cat.

Emm...you know...that would explain why the door was open as well. So, I just quickly looked in our room and she wasn't there and that's probably the first time I..that panic started to build. So, obviously (Obviously? Not from the previous telling!) I ran back into her room and...emm..just as I did that, the curtains, which were closed, just kind of blew open and as they did that, I noticed that the shutter was up and the window was open.

PM: And what did you think in that moment?

KMcC: I thought someone's taken her.

PM: You went down to tell Gerry straight away?

KMcC: Yeh, I...I basically whizzed round the apartment. About 15 seconds. I don't know why. In my head I was just thinking if someone's been in and she's cowering somewhere, I guess, which is why I did it. And then I just flew out through the back, down the stairs to the restaurant.

I don't know how Kate McCann can do this. Does she think she's addressing an audience who are two sandwiches short of a picnic? Does she think none of us remember what she said before and can compare? Surely someone could have/should have suggested that she just take a glance at her old interviews and make sure she remembered the story as she had told it in the past? Kate McCann seems to think it's OK to re-write history. The question is why? Why would she think it's OK? Because there isn't a journalist out there who will call attention to the glaring contradictions? Yes, that's exactly what I think. Not one of them has the cojones to say, "Hang on a minute.."

What happened to investigative journalism? Is there no one at all who will ask the obvious questions? Shame on the lot of them and especially those who have filled their pages over the past few days with the utter garbage that Kate McCann has written.
Posted by AnnaEsse at 07:41 5 comments: