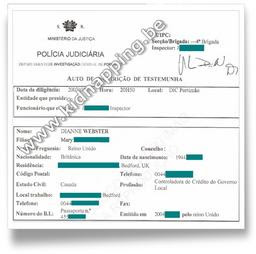 The interview begins at 8.45pm on May 4th 2007. Since the informant has no command of Portuguese in spoken or written form, an interpreter was called for: Natalia C.

On the matter in hand, we note that:

The informant is interviewed as a witness, She is part of a group who traveled to Portugal with the parents of the minor, Madeleine. She is FIONA's mother. She had accompanied her, her husband and her two small children. She has known the parents of the missing child, Kate and Gerald, for around four years, through her daughter. They have since become friends.

She states that the McCann couple have three children, twins aged two and Madeleine, nearly four years. She thinks the idea of coming to Portugal came from her daughter. She believes her daughter knows Portugal.

The informant arrived in Portugal on April 28th at around 12.20/12.30 from Leicestershire to Faro and then to Praia da Luz. From Faro to the Ocean Club they they used the airport's shuttle service. After checking in, she was placed in apartment G5H with her family. (Her daughter, her son-in-law and their two small children)

Concerning the usual routines, the informant states that she only spent part of each afternoon with her family and that not always. Sometimes she read, she went shopping or did other things. As for the mornings, she only had lunch one day with her family, Wednesday, because it was raining. On the other days, she spent the mornings playing tennis.

They left the apartment at around 8.45 and accompanied by her son-in-law and her daughter, they went to join the rest of the group at the "TAPAS" restaurant. The McCann couple were amongst the other friends at dinner. To our question, the informant told us that given that her daughter had an intercom allowing them to hear if the children were shouting or crying, no one went to check on the spot. However, she reported that Kate and Gerald as well as other couples went a few times, on a regular basis, to make sure their children were OK. During one of these checks, Kate came back, frightened and nervous, even panicked, saying that Madeleine had disappeared.

They immediately organised search parties, in the apartment, thinking that she could be hiding in there, then outside. In spite of help from the Ocean Club's employees, the searches were fruitless.

The informant does not know Madeleine well, because she lives a long way from the McCanns, and she cannot say very much about Madeleine's personality. Nevertheless, she reports that Madeleine was calm but active and energetic and well brought up. She is an attractive and a good child.

During this holiday, she has noticed nothing unusual or which could be linked to the investigation.

She has no other details to add. After reading with the interpreter, who explains to her, she goes on and signs.

(I'll finish the rest of the news tomorrow!)

Comment: I just keep getting this sense of Déjà vu with each new statement I type. I am sure that Diane Webster's words are almost identical to those of someone else in places, especially when she talks about Kate's going back to the restaurant, frightened, nervous and panicked even.
Posted by AnnaEsse at 22:38 2 comments:

(Artist's impressions of Noëlla Hégo and Stéphane Moitoiret)
On the night of July 29th 2008, Valentin Cremault, aged 11 was killed as he rode his bicycle in the little French town of Lagnieu, in the Ain region. So horrendous were the lacerations to the child's body that the first doctor to examine him thought he had been attacked by a dog or a wolf.

"The dog bites were actually stab wounds. Someone had slashed and punctured the little boy's body at least 50 times."

On August 7th, Stéphane Moitoiret and his partner, Noëlla Hégo, were picked up by police in connection with the murder, after motorists reported the strange behaviour of a couple of hitchhikers they had picked up.

"The couple, who claimed to be pilgrims and slept rough in communal buildings, said they had been sent to France by the Australian government and wanted to carry out "commando operations on gendarmes and French public figures". (True Crime Report)

Moitoiret and Hégo are variously described as, "The King of Australia and the Divine Princess," and, "His Majesty's Secretary and the Divine Princess." According to Moitoiret's mother, Chantal, Stéphane and his partner have been traveling here and there, throughout France for the past 20 years. She had not seen her son for three years when he was arrested. She said that he was a, "kind boy, but something wasn't right there."

Chantal reported that her son had suffered from mental health problems, possibly since his father died in 1986 and that if it was Stéphane who had committed the murder that it wasn't his fault, that he had, "paranoid thoughts," and possibly, " a-t-il cru que le petit garçon n'était pas un petit garçon et il s'est senti attaqué," (he believed that the little boy wasn't a little boy and he felt he was being attacked) (20 minutes.fr)

Like Fourniret and Olivier, Moitoiret and Hégo had moved around a lot; the former couple had settled in various places and their history over the years was easy to map; Moitoiret and Hégo had led an itinerant life for 20 years and the French police are reported as saying it was very difficult to know where they had been because of there being no bank or phone records. It appears that like Fourniret and Olivier, Moitoiret and his partner may have left a trail of crime in their wake.

Also, like Michel Fourniret, it appears that Moitoiret's partner ultimately gave him away to the police. Just as Monique Olivier had made statements about her husband's crimes, Hégo gave important evidence to the police when she directed them to the place where the bloodstained sheath of a knife was found.

"The sheath of a knife, stained with blood, on which was found the DNA of little Valentin and that of his alleged murderer, Stéphane Moitoiret, was found at the beginning of the week, the Bourg-en-Bresse prosecutor, Jean-Paul Gandolière, announced on Thursday. 'It appears that this sheath held the murder weapon, which is still being sought,' he stressed."

"It was after statements made by Noëlla Hégo, Stéphane Moitoiret's partner, that the investigators of the national gendarmerie found this sheath. It was found in a coppice, a dozen or so metres from the road taken by the couple after they left Saint-Sorlin, Ain" (Le Figaro 14/08/08)

At the moment, Noëlla Hégo is facing similar charges to those initially faced by Monique Olivier. She is under investigation for, "not preventing the commission of a crime, removing evidence and non-disclosure." (Le Figaro)

The French police are now investigating a large number of unsolved murders that appear to be linked to Moitoiret.

"There are a large number of unsolved murders that appear to match Moitoiret's M.O., as well. Victims include a priest, a transvestite, and men and women of varying ages. So far, the links seem to be in how victims are displayed after death, and in the way the knife was used to kill them."

One such crime is the 2005 murder of Marine Boisseranc, aged 20.

"Marine's father Eric detailed some of the commonalities between his daughter's murder and that of Valentin Cremault. Boisseranc noted that his daughter had been stabbed at least a dozen times. The killer in both cases was right-handed and determined to be about the same height as Moitoiret. There was a homeless shelter not far from the Boisseranc murder scene, and authorities believe they can place Moitoiret in the area at the time of Marine's murder." (True Crime Report)

I would assume that this case will take quite some time, years maybe, as in the Fourniret/Olivier case, to be brought to court, since there appear to be quite a few crimes which could be linked to Moitoiret and his partner. Sometimes it seems to me that these killers who come to light only represent the bubbles that rise to the surface from some kind of evil swamp, festering away under the level of awareness of most us who are just getting on with our ordinary lives. No sooner has one bubble been skimmed off the surface, than more rise and exude their foul stench.

I look out of my window at the sunny day, the occasional person walking past my garden, and the council workers emptying the contents of my recycle bins into their truck, and remind myself that I am living in a world where most people are just ordinary like me, doing their best to live an ordinary life, going about their everyday activities. Serial killers are very rare....but I must remember to lock the back door when I go to bed!
Posted by AnnaEsse at 10:14 No comments: