Madeleine McCann: who searched for this little girl? (Part 3) 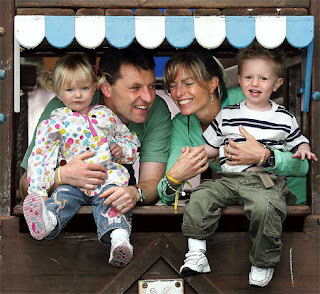 Above: Gerry and Kate take the twins to the zoo.

Through June and July 2007, Gerry McCann was well into writing his blog, steaming away there with jolly updates about taking the twins to the zoo, doing media interviews, meeting with the Portuguese police, picking up various visitors from the airport and jogging to the top of the hill. He also found time to pop into the local church in Praia da Luz, after his morning run, to spend 10 minutes praying for Madeleine.

"An early rise for Gerry this morning to drop off and pick up more friends from the airport. They bring back his wallet, which had been returned, with all the cards, driving licence and 30 euros in cash intact! Only the sterling cash appears to be missing. Later a friend from Amsterdam drops in for 2 hours, whilst on a golfing trip in the Algarve."

These entries are précis from Gerry McCann's blogs and are jaw-droppingly trivial for the most part. I think the McCanns took to their celebrity status very quickly and appear to have assumed that us ordinary folks out here really want to know really, you know, what they had for breakfast and how often Gerry emptied his bowels. Whatever was going on with the police investigation, the McCanns seemed to have established their routine of answering emails and phone calls and tweaking their level of media attention. It was almost as though they were playing happy celeb couple on the Algarve and occasionally they'd meet with the police to make sure they weren't about to be prosecuted for neglect, then got on with living in their own little La-La Land, planning long-term strategies for their campaign.

More early morning runs, they have a meeting with their campaign manager, Gerry takes the twins to the beach and Kate answers emails.

Are they searching yet? I'm beginning to feel like the kid in the back of the car, asking, "Are we there yet?"

On day 94, Sunday August 5th, sniffer dogs are brought in to investigate the McCanns' living areas in Praia da Luz and several vehicles, including their vehicle, hired around 3 weeks after Maddie's disappearance. Are the McCanns bovvered? Seemingly not because the following day, Gerry goes to Portimao to buy a new printer. On day 96, when samples are sent for analysis, Gerry records that he and Kate manage their early morning run in 'pleasantly cooler conditions,' and they record an interview for Sky News.

It's this attitude, I think, that made many people wonder about the McCanns and their daughter's disappearance. While many parents in similar circumstances could have been worried about what might have been found, the McCanns just kept right on with their daily routines and activities related to their media campaign. Perhaps they were simply confident, for some reason, that nothing would be found.

Meanwhile, the British media reports on the possible findings from the dogs' work and on day 98, Gerry complains that the media attention has become intrusive. Reality, it seems, was in danger of creeping into his perfectly constructed model of his world, with he and Kate as saintly parents, recipients of the world's adoration, sympathy and oodles of dosh!

I don't think they're searching yet, though. I think they're just waiting for the Portuguese police not to find Madeleine and, dare I say it, having a fine time in the Algarve sunshine.

Folks, I'm still looking for any signs that Kate and Gerry McCann are searching for their daughter. I wouldn't call doing lots of media interviews for various TV channels in diverse European countries searching, but then I guess the McCanns were saying that this was to maintain Madeleine's high media profile and perhaps jog the memories of people who might spot Madeleine in France or Spain etc., or suddenly recall having seen something significant during a holiday in the Algarve.

At the beginning of September, Kate and Gerry are aware that they will be called in for questioning by the Portuguese police at any time, but the morning runs continue, up and down that hill and along the beach, and the relies keep on arriving and departing.

On day 126, Thursday September 6th, Gerry McCann is reported to be very angry that he had to find out from the media that the PJ had the lab results back from Forensic Science Services.

Chief Inspector Olegario Sousa says, "The lines of investigation are the same since the beginning - they are all open. We said the results are important for one of the lines, the one that considers the hypothesis of the little girl being dead."

By late evening on Friday 7th September, as the world knows, Kate and Gerry McCann had both attained arguido status. The Times reports Gerry as saying, "We are completely f******, we should have seen this coming weeks ago and gone back to Britain."

There you have it folks! They should have hightailed it back, got going while the going was good, before those nasty sardine-munching police officers got those results and dragged them in for questioning. Never mind that they were not going to leave without Madeleine, as soon as they were asked a load of very awkward questions, they wanted to be out of there! And out of there they got, as fast as they could book a flight, let Sky News know what flight they'd be on and throw their belongings into a car. Sky News reports that the large press gathering at 7am, as the McCanns scarper from their villa, is there at the McCanns' invitation. Intrusive media? Not when it suits their purposes obviously!

Folks, at this point in the story, they're scooting, vamooshing, but they don't seem to have done a lot of searching in Praia da Luz or anywhere around Europe, North Africa or any other continent.

On September 29th, Clarence Mitchell, now the McCanns' full-time spokesman says he and a few journalists he worked with on the Soham case see parallels with Robert Murat, but he cannot say any more about it!

The McCanns and their spokespeople do appear to have been doing some searching....for a patsy!!

So, Gerry McCann, as of December 2009, insists that he and his wife are still searching for their daughter? I'm still asking when they started!

Madeleine McCann: who searched for this little girl? (Part 2) 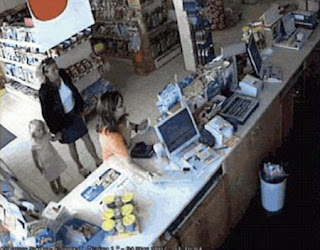 Above: very clear image of a small blonde child accompanied by an adult female at the service station on the A22 in Portugal, soon after Madeleine disappeared.

I shall digress a little here from wondering who actually searched for Madeleine McCann to mention two very odd events, featuring rather strange reactions from parents who were convinced that their daughter had been abducted, who said they were doing everything they could to get her back.

The first odd event, featured Kate McCann and the case of a child seen at a service station on the A22 road in Portugal. The PJ had received news of the reported sighting and were keen to get Kate McCann to Portimao without delay, so that she could view the images captured on CCTV at the service station.

Gonçalo Amaral describes Kate's journey to the service on May 4th 2007 in Chapter 3 of his book, "A Verdade da Mentira." (1)

"Madeleine's parents are already back in Vila da Luz when we receive photos taken in a service area of the motorway: you can make out the figure of a little girl, who looks like Madeleine, accompanied by a couple. These images come from a CCTV camera on the motorway linking Lagos to the Spanish border. The McCanns are asked to come to Portimão in order to proceed to an identification. It's the end of the day. Kate Healy seems annoyed at coming back and made uncomfortable by the speed of the police car taking her.

We are somewhat astonished by her reaction, as if she was not expecting to get her daughter back. The identification turns out negative."

The second odd event featured Gerry McCann waiting for a phone call from a man who had attempted to extort a large sum of money in return for supposedly handing over information in his possession about Madeleine's whereabouts.

"AN ATTEMPTED EXTORTION AND AN UNCONCERNED FATHER"

"One day, we were all together at the PJ in Portimão - inspectors and negotiators, members of Scotland Yard and the Leicestershire police - waiting for a contact to define the place and the conditions for the handing over of the money in Holland; when the tension was at its height and we were all holding our breath, Gerald McCann displayed a nonchalance that surprised all of the police officers present, including the English. The atmosphere got heavier as the waiting drew out, but McCann, relaxed, was reading trivia on the internet and discussing rugby and football with the English police, while licking a lollipop. On the telephone, he laughed with friends who called him. Perhaps this was nervousness; sometimes it's totally displaced, given what is at stake at the time. His attitude shocked. When, two days later the dutch police informed us that the individual had been arrested, that he was not holding any information and had lied from start to finish with the sole objective of extorting money from the couple, we were not surprised."

So far, I have noted three situations that evoked strange reactions from parents who were convinced their daughter had been abducted, situations where they did not appear to be overly concerned that they might be about to receive important information about the child whom they were 'really working very hard really,' to get back: the reported sighting at the service station; the anonymous note sent to the Dutch newspaper about the location of Madeleine's body; the contact with demands for money. Does any of that sound like parents who are devastated by their daughter's disappearance and desperate to follow up all leads to find her? Were they doing 'everything we can,' to get Madeleine back, considering that they supposedly had no idea where she was or who she was with?

* Chapter 5 of A Verdade da Mentira in English: Here


(1) Chapter 3 of A Verdade da Mentira in English: Here

Posted by AnnaEsse at 13:03 No comments: