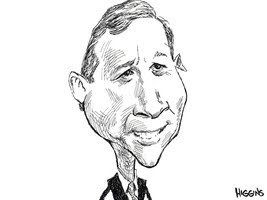 Has the rhetoric in the Illinois Senate campaign sunk to libelous levels?

Nadhmi Auchi, the human peg with which Mark Kirk tied oppenent Alexi Giannoulias to former Iraqi dictator Saddam Hussein, has sicced his lawyers on the North Shore Congressman. Kirk accused the Iraqi-born businessman and Broadway Bank client of handling the personal accounts of Saddam Hussein and selling him Italian warships in the 1980s.

Auchi’s attorneys, Carter-Ruck, responded with a seething letter objecting to the “serious and false accusations that you made about our client at the Chicago Council on Foreign Affairs on 8 August 2010.”

The letter charges that the newspaper articles that formed the basis of Kirk’s accusation came from the British newspaper The Observer. Auchi took legal action against the paper, forcing the paper to admit the articles contained “significant inaccuracies,” and removing them from their website. Carter-Ruck is demanding that Kirk “withdraw the false allegations and … apologize to our client.”

Kirk seems inclined to do nothing of the sort. In fact, a Kirk aide linked to the letter in an e-mail to supporters, and wrote of Auchi, “Maybe he’ll even threaten to sue us for mentioning his well-documented criminal past.” Just so you know that Kirk isn't intimidated by a litigious British billionaire.

The aide's e-mail also mentioned that Auchi had been convicted of fraud by a French court for receiving illegal commissions in an oil scandal, and has been banned by the State Department from entering the United States. Auchi did not dispute those allegations, only the characterization of his relationship with Saddam Hussein.

“The reporting of the New York Times and the Observer of London concerning Mr. Auchi, a convicted felon who is barred from entering the United States, speaks for itself," Kirk spokeswoman Kirsten Kukowski said in a statement. "The very fact that Broadway Bank has a long track record of loaning money to thugs, criminals and mobsters like Auchi and Rezko should tell voters everything they need to know about Alexi Giannoulias, his judgment and whether he is suited to represent them in the United States Senate.”

Kirk seems to be daring Auchi to sue him for libel. Does Kirk really want to get into another battle over who’s telling the truth? If Auchi does sue, it won’t be the first time Kirk has been accused of playing fast and loose with the facts, but it will be the first time he’s hauled into court for it.

Note: This is the Observer article which Carter-Ruck claims has been deleted from the newspaper's web site.

Posted by AnnaEsse at 10:41 No comments: