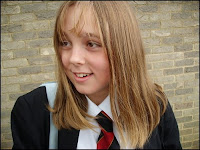 You can read fairly full details of Sammy's story from earlier posts on this blog. (See Labels) So, I will just give a few details as a reminder.

Sammy Osborn disappeared from her home on April 3rd, 2007, after which Sammy's mum launched a campaign to find Sammy and bring her home. Gill Osborn, Sammy's mum, had a good idea where Sammy had gone, as she had previously run away to join a man she had met on the internet. The police found this man, but not Sammy: he denied having seen her. Sammy's mum and Sammy's friends launched into fund-raising for a missing person's charity and Gill did everything possible, including joining online message boards, to encourage people to think about Sammy and to look for her.

Sammy was 15 years old when she ran out of her family home. Around the time of her 16th birthday, which was September 22nd, Sammy made contact with the police and confirmed that she was safe and well. However, since her birthday fell after the start of the school year, Sammy should have been in full-time education and this should have been taken up by the local truancy officer, whom I believe actually found Sammy out shopping in Bristol. I don't know what the truancy officer did as follow-up. Social Services should have been involved as Sammy was under school-leaving age, but apparently they couldn't find her. So, they closed the case.

Sammy is known to be with a man called David Manning in Bristol. Sammy met him on the internet and this meeting led to changes in Sammy's personality, which worried her family and friends and led to her disappearance.
(See http://www.crop1.org.uk for information on sexual grooming on the internet.)

I have been informed that Sammy has not been seen officially since mid-November 2007 and that the police in Bristol are worried for her safety.

Please visit the, "CROP," web site, and if you live in or near or travel through the Fishponds Road area of Bristol, please report any sightings to the Bristol police.

Finally, the message from Sammy's mum that has not changed since Sammy disappeared.

"Sammy.......
I hope that one day you will be free to think for yourself again,
Until that day I pray that you are safe,
When that day comes we will be here for you,
Your family and friends still care for you,
And most of all,despite everything,your mum still loves you,
Take care sweetheart,
You know where we are if you need us."

Please don't forget about Sammy Osborn.
Posted by AnnaEsse at 20:13