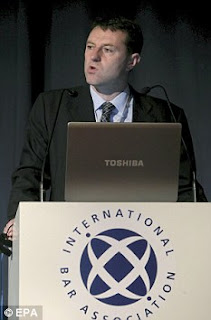 Why does Gerry McCann so often look like he's whistling or eating spaghetti?

So, we have learned that Gerry McCann appeared at the conference in Madrid of the International Bar Association and talked about the media and privacy.

Gerry also mentioned the case of Jaycee Lee Dugard, the young American woman, who suddenly reappeared 18 years after she had been abducted.

"Mr McCann was speaking to reporters at the International Bar Association's annual conference in Madrid, where he gave a speech on his family's relationship with the media.

After the speech he said he and wife Kate had been moved by the Channel 4 documentary on the Jaycee Lee Dugard kidnapping, Captured for 18 Years: The Jaycee Lee Story, screened last week.

Mr McCann said watching the programme 'had brought back some awful memories.'

But he added: 'Kate and I have never lost hope and the Jaycee Lee Dugard story was important for us.

'It was an incredibly tragic case, but it gave us hope."

It gave hope to Gerry and Kate? That their daughter might be alive somewhere in the hands of a paedophile, being raped and living in a shed? Right!

I really don't see why Gerry should compare the case of Jaycee Lee Dugard to Madeleine. What are the similarities? Well, both were children. Both disappeared. I think that's it. No! Both female. And that is definitely where the similarities end as far as I am concerned.

Jaycee Lee Dugard was 11 years old and she was abducted from a bus stop on a public road. Her stepfather witnessed the abduction and he was able to describe a vehicle and an occupant of that vehicle. From his description, an E-fit was drawn, which can now be seen as having been an incredible likeness of Nancy Garrido. Madeleine McCann was said to have been asleep in a holiday apartment, sharing a bedroom with her twin siblings. Her parents and their friends were making regular checks and the window of opportunity for an abductor was said to have been 3 minutes. No trace of the abductor was found in the apartment and there was no sign of a break-in. The only witness who thinks she saw the abductor, the stranger whom she described to the police initially as "carrying a bundle that could have been a child," who eventually became a man definitely carrying Madeleine, was Jane Tanner. After the McCanns insisted that the police issue a description, based on Jane's sighting, the police issued an E-fit based on that description, which they took round the local area and showed to residents. This is the E-fit based on Jane Tanner's original description:

One local resident described the character portrayed as, "An egg with a side parting," but I kid you not, folks: this was the E-fit based on Jane Tanner's description. There was no vehicle to be described and the direction the alleged abductor was walking in was changed at least once: the direction of the beach; the direction of Robert Murat's house.

For Madeleine, the police would have had nothing to work with. No accurate description of an abductor or of a vehicle and really no absolute proof that an abduction had taken place.

Gerry McCann continually repeats that there is no evidence that any real harm has come to his daughter. Well, he has to, doesn't he? Under the Children and Young Persons Act of 1932, there is no age limit set for leaving children alone. However, if significant harm should come to a child, the parents can be prosecuted. So, that's why Gerry keeps repeating this mantra, though the very fact that Madeleine is missing and not where she should be is harm in itself.

So, Gerry, I see no real similarities between the Jaycee Lee Dugard case and the sad case of your daughter Madeleine and the very fact of her disappearance at age nearly four years is harm in itself. I sometimes think you actually believe what is coming out of your mouth. But Gerry, you're whistling Dixie!!
Posted by AnnaEsse at 20:05 4 comments: