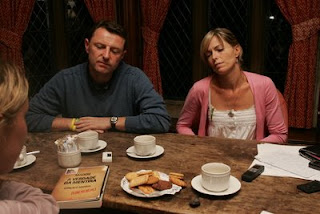 Gonçalo Amaral to sue the McCanns.

Thanks to Joana Morais for the information and the image, which I reproduce here.

LISBON (AFP) — The police officer who formerly led the Portuguese investigation into the disappearance of British girl Madeleine McCann said he would counter sue the missing girl's parents Sunday.

"My lawyers are working on the case and we will take the McCann couple to court and perhaps other people for defamation, slanderous denunciations and false statements," said Goncalo Amaral on Portuguese TVI television.

"We will see who has spoken the truth in this case" into the disappearance of Madeleine in the south of Portugal in May 2007, he added.

On Saturday, Kate and Gerry McCann announced they were to take action for defamation over comments made in the media by Amaral, who is now retired.

In a statement, the couple said: "We, together with our three children Madeleine, Sean and Amelie, are taking this legal action against Goncalo Amaral over his entirely unfounded and grossly defamatory claims -- made in all types of media, both within Portugal and beyond -- that Madeleine is not only dead, but that we, her parents, were somehow involved in concealing her body."

Portuguese police named Kate and Gerry McCann as "arguidos", or formal suspects, in their daughter's disappearance, in September 2007, but prosecutors announced in July 2008 that they were no longer suspects.

Amaral was removed from the case in October 2007.

Portuguese police have said they are no longer actively investigating the case.

Madeleine, who would now be six years old, went missing from a holiday flat where her family were staying in the Algarve resort of Praia da Luz on May 3, 2007.

Posted by AnnaEsse at 15:27 No comments:

Maddie: The Truth of the Lie English Narration of Portuguese documentary by Gonçalo Amaral

Posted by AnnaEsse at 13:10 No comments: