"Kate McCann back in Portugal to pray." 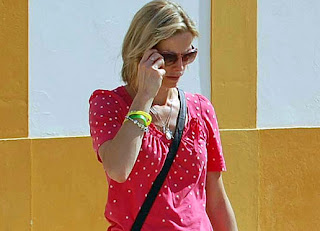 Today the New of the World tells us that Kate McCann has returned to Portugal 'to pray.'

KATE McCann made a solitary pilgrimage this weekend to the Portuguese resort where her daughter went missing, "for emotional reasons and to pray for Madeleine."

So, Madeleine is not one of the 'emotional reasons,' for her return? You'd think the strongest emotional pull to the village of Praia da Luz would be that her daughter Madeleine disappeared there and never returned to her home in Rothley from what was supposed to be a family holiday. But, no, Kate McCann went back 'for emotional reasons AND to pray for Madeleine."

Kate McCann, as the 'devout Catholic,' some would claim you to be, surely you know that you can pray for your daughter anywhere? You could sit quietly and privately in the bedroom that Madeleine never returned to, amongst those things of hers you claim have never been changed, and pray for her.

After dropping the twins off Kate and I popped into church for 10 minutes to pray for Madeleine. Spent most of the day going through mail, e-mails and I had a number of calls to make. It was good to spend some time with my family and Sean and Amelie certainly enjoyed their auntie’s dinner- sometimes it is hard to beat mince and ‘tatties’!

Yes, you can pray anywhere, at any time, Kate McCann, but you and Gerry viewed praying for your daughter soon after she disappeared as something you took 10 minutes out of your busy day to do. I bet the mince and tatties took longer to enjoy than your 10 minutes of praying.

Passengers who saw GP Kate, 42, on a flight from East Midlands airport to Faro on Friday morning said she cut a lonely figure. One said: "Kate looked very sad, she was by herself. It is clear time is not healing the pain."

Time is not healing the pain? This was Kate McCann on what would have been her daughter's fourth birthday, just a few days after her child disappeared into thin air. Kate McCann looks radiant, like it's her birthday!

It seems to me that Kate McCann's anguish has increased over time and I wonder why that should be. In an interview with the BBC's Jane Hill, Kate McCann said that the first 48 hours were very hard and that they were, "almost non-functioning."

Well, the McCanns did appear to recover rather quickly from that 'non-functioning,' state. The pain of losing their daughter would seem to have been overcome with amazing, uncommon, and I would add, almost indecent speed.

As Kate revisited the scene of Madeleine's abduction aged just three it emerged that there are new efforts to find her.

"Gerry and Kate have some very experienced people working for them now and they will also pray for a miracle", said a pal.

These cops have joined Dave Edgar's team in Portugal? What team? Does this mean there were already more than Edgar and Cowley? And have they finally decided to search in those 'hellish lairs,' in those, 'lawless villages,' within a 10 mile radius of Praia da Luz? Or is this an attempt to persuade the Portuguese courts that the McCanns truly believe that their daughter is still alive if they are pursuing their efforts to sue Dr Gonçalo Amaral, the only person who was ever truly committed to finding out what had happened to Madeleine, on a night when she disappeared into thin air, when the shutters had not been jemmied and Jane Tanner 'saw,' a man of varying descriptions carrying a child?

I think those of us who pray should pray for Kate McCann, that she finally tells the truth about what happened to her daughter and frees herself from this prison of lies and deceit that she has made for herself. The truth will set you free Kate.

(Addendum: if Himself happens to read this, perhaps he would tell me why the font half-way through this blog post will not do what it's told and insists on being bigger!)