SOS Madeleine McCann: the PJ were obliged to announce Madeleine's disappearance as an abduction.

John Buck, British ambassador in Lisbon, at the time of Madeleine McCann's disappearance, went to Portimao to demand that the PJ immediately announce to the media - above all the British - that Madeleine's disappearance was an abduction and that her parents, Kate and Gerry McCann, were two innocent victims.

"Immediately after Madeleine's disappearance, while we didn't yet know if it was an abduction or another type of crime, the PJ were obliged to issue a press release, on May 5th 2007, publicly announcing the theory of abduction." Inspector Gonçalo Amaral accused yesterday, stressing that the announcement was made in spite of his opposition and that of other inspectors involved in the investigation.

Gonçalo Amaral was speaking yesterday in the context of an exclusive interview with SOS Madeleine McCann and Gazeta Digital.

According to sources close to the British ambassador in Lisbon, before his intervention with the PJ in Faro and Portimao, John Buck had already discussed the case with the Portuguese Minister for Foreign Affairs.

"In a situation like the one we were presented with, in the interests of the child, no possibility should have been ruled out, even that concerning the parents, the relatives and friends. Above all if there was not the slightest evidence of abduction," Gonçalo Amaral concluded, stressing that, "the continuing investigation proved it."

"They took advantage of the space we left for them. That was an error on our part."

It was also on May 5th 2007, two days after the announcement of Madeleine's disappearance, that the PJ, according to Gonçalo Amaral, were going to commit an important error: "we were busy checking leads that came from the ambassador. Leads that incidentally proved false."

New instructions from the regional and the national directorate of the PJ, given after the intervention of the two British diplomats - the ambassador John Buck and the consul Bill Henderson - diverted the attention of the investigators from the McCanns.

Kate and Gerry McCann, for the first and only time, then went to take clothes for washing at the complex's laundry, amongst them some of Madeleine's clothes, which the inspectors were not going to learn about until two days later. Too late, according to Gonçalo Amaral.

"At the time, we had no way of knowing exactly what clothes Gerry was wearing on the night of the disappearance or what clothes were given to be washed on May 5th," Gonçalo Amaral acknowledges.

It was through statements from several officials of the complex, linked to the laundry service, that the inspectors were to learn that the McCann had had some of the children's clothes washed, Madeleine's and also Sean's and Amelie's.

"That would never have happened without the intervention of Mark Warner and especially the ambassador. They took advantage of the space we left for them, which was an error on our part," Gonçalo Amaral admits.

"Last Saturday (5/05/2007) I received a bag of clothes brought by Mark Warner officials, which were expressly stated as belonging to Madeleine's family - there were adults' clothes (male and female) and children's (...)," one of the laundry supervisors stated.

If the laundry supervisor only admits to remembering about a pink skirt belonging to Madeleine, she is formally saying that there were indeed other of the little British girl's clothes, which a few work colleagues have elsewhere confirmed to the police.

To follow: "The dogs were prevented from following up their work in the United Kingdom."

Posted by AnnaEsse at 12:43 No comments: 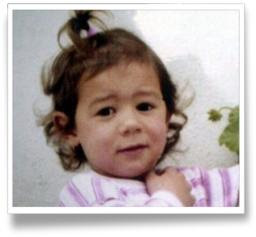 An 8 year-old child, with a great resemblance to Denise Pipitone, has been located on the Greek island of Kos. The Greek authorities have spoken to the child, who speaks perfect Italian and the police have also questioned the woman who was accompanying her. The woman, in her thirties, maintained that she was the child's mother. She was finally arrested because of the many contradictions during her questioning. Analyses of DNA samples taken from the woman show that she is not the child's mother and exclude any familial relationship. The woman, of Romany origin, finally confessed to not being the child's mother, but refused to say any more, according to the police.

A photo of the child has been sent to the Mazzara police. Denise's mother, Piera, has confirmed the resemblance between the child and her daughter. "The shape of the eyes is the same as Denise's." she said, but the mother wants to keep her feet on the ground for the moment.

Only complete DNA tests can dispel the doubt. A sample has, in fact, been taken from the child, who was found in Greece and has been sent to Italy in order to be compared with that of Piera Maggio to establish with certainty if this is or is not Denise.

The child was pointed out to the police by a tourist who bought a bracelet, and who was struck by the resemblance to Denise, especially as the little girl was speaking Italian.
Posted by AnnaEsse at 10:01 No comments: