Madeleine McCann: private detectives are looking for an Australian woman who looks like Victoria Beckham.- Updated 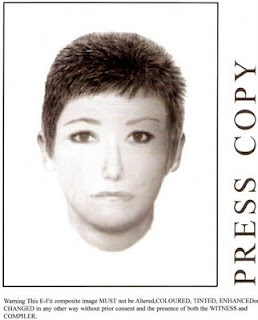 Once again, the mainstream media seems to be going overboard with the latest piece if vital information that has turned up over two years after Madeleine McCann disappeared from her parents' holiday apartment.

It seems to be mainly tabloids in the UK, The Sun and The Daily Mail, for example, that are running with this story in a big way. Apparently, a 41 year-old man noticed a woman waiting outside a bar, he spoke briefly to her and two years later, what she said was significant enough for him to contact the McCanns' private detectives, who are now actively seeking this woman. She's small and thin, so maybe she was thin enough to squeeze through the very narrow opening of the window in the Praia da Luz apartment. And maybe she then passed the drugged or sleeping Madeleine to the George Harrison lookalike.

Hang about, though...no, she can't be "Bundleman," because she's too short. But then if her resemblance to Victoria Beckham extends to wearing those skyscraper shoes when she's trundling around a Portuguese holiday resort, helping to abduct a child with the world and its dog checking every few minutes, then it might just be her! Now, they just need to find someone who heard the tell-tale clickety-clack of stilettos on the cobbles as a dark-haired person clopped off towards the marina, carrying a child. She's the right age, according to at least one of Jane Tanner's descriptions and there are so many e-fit portraits by now, the odds are that even I would look like one of them. So, she must.

"One of the witnesses, a 41-year-old British man, had a brief conversation with her.

Mr Mitchell would not reveal what she said for operational reasons, but said it was "potentially significant" to the little girl's disappearance.

He said the woman was then seen having a "heated conversation" with another person in Spanish in a nearby bar. She then wandered off towards a hospital."

She wandered off towards a hospital? Something implied here, of course, even though the hospital may just have been one of many buildings in the general direction in which the woman was going. Or maybe they could make it out clearly through the trees, like apartment 5A from the Tapas bar.

"Mr Edgar said the witnesses had not come forward earlier for "personal reasons" and denied that they were drunk, even though they had visited a number of bars on the night.

He said the conversation took place about 72 hours after Madeleine disappeared - and it was possible that Madeleine could have been taken to Barcelona by boat in that time."

So, "personal reasons," prevented this man from potentially helping to find a little nearly four-year-old who was missing? His wife might wonder why he was approaching strange women in a bar after doing a Spanish pub crawl?

Anyway, this woman, this Victoria Beckham look-a-likie, who has an Australian or New Zealand accent, and who could, let's face it, be anywhere in the world, is being sought by the private detectives. If she exists, then she possibly won't remember the man who wasn't drunk who approached her outside a bar when she was waiting for someone, or maybe even a cab, that didn't turn up.

"The two men, who, oddly, have waited two years to make themselves known, do not agree about the origin of the accent, but they state that the woman also speaks Spanish or Catalan and described her as being 1.57m tall, thin, aged between 30 and 35. When they met her she was dressed in jeans and a pastel-coloured top.

According to the witnesses, the woman was in the marina of Barcelona's Olympic Port near the "El Rey de las Gambas," bar, where she confused one of the men with the person she was waiting for - The conversation she had with the witness convinced the detectives that she could bring important information to the case.

(Details of the conversation will be in tomorrow's edition of the Portuguese newspaper "24 Horas.")

A spokesperson for the Australian Federal Police has already confirmed that the authorities, "are not investigating these allegations at this stage," adding that the British authorities have made no request for assistance.

At the beginning of this week, the police for the Leicestershire area where Kate and Gerry McCann live, revealed having spent more that 880,00 Euros on the investigation into Madeleine's disappearance, a sum which does not include expenses directly incurred by the British government.

The disclosure of this alleged new lead follows the announcement in Portugal that Gonçalo Amaral was thought to be in the process of bringing together new details that call into question the theory of abduction, details that could allow the case to be re-opened. Gonçalo Amaral was the coordinator of the PJ's Portimao Department of Criminal Investigation who led the investigation into Maddie's disappearance and who ended up being thrown off the case after Madeleine's parents were made "arguidos," in September 2007."