"Faked Abduction," A New Book Coming Soon From The USA 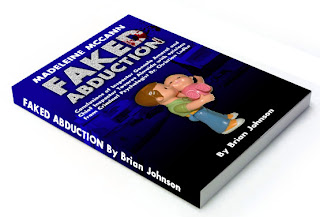 The Conclusion Of The Portuguese Police Investigating The Madeleine McCann Disappearance.

From the above web site:

"Faked Abduction will soon be available to purchase from this website.

Containing many details from the comprehensive police files, the book highlights the inconsistencies in the various alibis, the ever-changing witness accounts and the lack of police cooperation from the McCanns and their friends, the so-called Tapas 7.

The McCanns have tried to gag people from publishing the truth about the case. In 2007, despite making several public assurances to donors to their “Madeleine Fund” that they would not spend any money on lawyers, they have employed some of the most expensive law firms in Britain to intimidate and suppress those who publicly doubt their abduction story.

While researching the book, the McCanns have declined to answer important questions relating to the disappearance of their daughter.

After reading the book, decide for yourself if this was a Faked Abduction."

Justice Secretary Jack Straw has launched a consultation with lawyers from major newspapers following the row over "super-injunctions" following the Trafigura row.

Junior justice minister Bridget Prentice told MPs last week that a number of senior judges would also be involved in a consultation over court orders which ban publication of certain information and also ban reporting about the order being made.

Prentice told MPs: "We are very concerned that super-injunctions are being used more commonly, particularly in the area of libel and privacy.

"The Secretary of State for Justice [Straw] has already asked senior officials in the department to discuss the matter with lawyers from the major newspapers. We are also involving the judiciary in a consultation.

"We are looking specifically at how the use of super-injunctions has had an effect and what we therefore need to do on that."

"We are looking specifically at how the use of super-injunctions has had an effect and what we therefore need to do on that."

Prentice told MPs during a debate on 21 October she would relay MPs message that further guidelines might be needed for judiciary to the Justice Secretary and the Lord Chief Justice.

The Prime Minister told MPs earlier this month Straw would examine the use of so-called "super injunctions" after the Guardian reported that it had been prevented from reporting a Parliamentary question tabled by Newcastle-under-Lyme MP Paul Farrelly, a former journalist, relating to oil company Trafigura because of an injunction obtained by the firm's lawyers, Carter Ruck.

Prentice told MPs the advice given to the Guardian by Carter-Ruck that the newspaper would be in contempt for reporting Farrelly's question, was incorrect.

She added: "I am happy to ensure that we send them a copy of Article 9 [of the Bill of Rights 1689], so that they can read and peruse it at their leisure."

So, let's have a wee look at this mega expensive company Carter Ruck. It amazes me that a couple of doctors like Kate and Gerry McCann can associate themselves with a company like Carter Ruck, that tries to use such tactics against a national newspaper, with legal advice that is incorrect. And a firm of solicitors that would seek to prohibit the publication of information about a company like Trafigura polluting the environment at serious risk to health and the environment?

Have the McCanns no shame? Or do they just not care as long as they have, "..the most feared libel lawyers," and they can shut people up, whatever the tactics or the cost to their wealthy backers? Let's face it, the McCanns must have some seriously heavy-duty backing to be able to afford to use five hundred quid an hour Carter Ruck to put the thumbscrews on ordinary people like those who set up The Madeleine Foundation.

The police files from the Maddie investigation in Portugal are in the public domain: they were released when the case was archived. The Madeleine Foundation simply presents information that is already in the public domain, but possibly few members of the general public have read it. The McCanns by way of Carter Ruck would seek to make sure that ordinary Joe Public does not have this information presented to him in a user-friendly way.

Conclusion: the McCanns have no shame, either about leaving three small children on their own, night after night in an unlocked apartment in a foreign country, or in using a bunch of heavy-handed legal representatives like Carter Ruck.

Jack Straw please do your job and get this properly investigated. Carter Ruck must be stopped from silencing people with their mighty fist of super-injunctions and efforts to intimidate people who do not have the financial resources to defend themselves.
Posted by AnnaEsse at 16:28 No comments: