Posted by AnnaEsse at 19:28 No comments:

Gerry and Kate McCann: serial child neglectors in search of a reputation 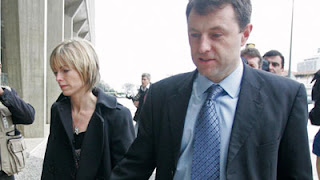 Kate and Gerry McCann arriving at the Lisbon Court February 2010
In February this year, the McCanns were successful in persuading a Portuguese judge that their right to a 'good reputation,' was more important than Dr Gonçalo Amaral's right to freedom of speech, and the injunction banning Dr Amaral's book, "The Truth of The Lie," was upheld.

By the McCanns' own admission, they left three small children alone in an unlocked apartment in a foreign country, night after night, checking on them every 30 minutes, as though a couple of doctors had no idea that a child could choke in just a few minutes, meet with an accident in a strange apartment, or wander out of that unlocked door. We were told though that their daughter Madeleine, who disappeared into thin air on one of those alone nights, could not have wandered off, but we haven't yet been told why her parents were so sure of this.

Gerry and Kate McCann, as we know, have maintained a global media presence since Madeleine disappeared, apparently intent on finding the person or persons who abducted their daughter. No other thesis is acceptable to them: she is alive, she could not have wandered off, she has been abducted, but there is no evidence that she has come to harm.

A child who has been abducted by a stranger has not come to harm? I guess if you seriously think that three small children alone in an unlocked apartment cannot come to harm, then believing that a child taken from her bed by strangers has not come to harm might not be too much of a leap of faith. She would, of course, be able to walk into her old home and take up that, 'spare place,' at the dining table. Nae bother!

If either of you, Kate or Gerry McCann were my doctor, your reputation as health professionals would have suffered serious harm. I don't think I could trust a doctor who thought it was OK to go out wining and dining while their three small children were alone in an unlocked apartment and who also thought that abduction was not bad for a child's physical and emotional well-being.

Anyway, in search of upholding their good reputation, our fine doctors hired Carter-Ruck, who describe themselves as, 'the UK's pre-eminent media law practice.' In doing so, the McCanns are in a special kind of company! Carter-Ruck is the law firm that stopped General Augusto Pinochet's extradition to Spain to answer to charges of human rights violations. Carter-Ruck is also the firm that unsuccessfully tried to prevent the Guardian newspaper from publishing an MP's question in the House of Commons on the activities of the oil company Trafigura.

The latest well-publicised Carter-Ruck client is Nadhmi Auchi, whom Mark Kirk, US Republican, has linked to Democrat Senate candidate Alexi "the Mob Banker" Giannoulias. Warner Todd Huston of the blog Chicago Now has responded to Carter-Ruck's attempts to silence American bloggers on this issue:

And, before you Carter-Rucksters begin to start addressing another threatening email this time to me, don't bother. Your email will be ignored and THIS post will stay up. Just like the Illinois Review, THIS post is just reporting the news. If the allegations made against your client are false, that is YOUR problem. Not mine. You should take up your concerns with the Illinois GOP.

Still, don't get your hopes up. Unlike your foreign experience, in America libel is properly hard to prove. Here we do not cotton to libel tourism as they cater to in England. Basically I'm telling you attorneys and your client Nadhmi Auchi to pound sand.

Oh dear! They're not impressed by Carter-Ruck's reputation, are they?

The McCanns hired Carter-Ruck soon after their speedy exit from Portugal. Was that because of Carter-Ruck's experience as media lawyers, or because they had managed to successfully save Augusto Pinochet from extradition? Either way, why would two medical doctors, intent on protecting their good reputation, hire lawyers who had defended the likes of General Augusto Pinochet? You are not only judged by the company you keep Kate and Gerry, but by the help you hire!

Carter-Ruck have threatened various bloggers and The Madeleine Foundation (Read Carter-Ruck's letters under the 'Newsletters,' link on the Madeleine Foundation web site) and anyone else who dares to question the McCanns' version of events, that version being that Madeleine was abducted by a stranger. However, there does not appear to be any evidence of that abduction. According to Locard's Exchange Principle:

No matter how much someone tries to clean up a crime scene, something is generally left behind. It may not always be detected, or even be visible to the human eye, but it's almost impossible to take any kind of violent action without shedding something. This principle, called Locard’s Exchange Principle, has become one of the motivating factors in the development of forensic science.

Yet, the person who allegedly abducted Madeleine McCann, whom Gerry McCann felt may have been hiding in the apartment when he checked on the children at around 9.05pm, left absolutely nothing of himself, not even glove prints. The shutters had not been damaged and the only prints on them were Kate McCann's and from their position, it appeared that she had been trying to manually lift the shutters from the inside.

Now, back to the hired help! There was Metodo 3, Spanish detective agency that had no previous experience if searching for missing children. According to SOS Madeleine McCann in February 2009, Metodo 3 agency was under investigation for money laundering. In July 2008, SOS Madeleine McCann reported that Metodo 3 was under investigation for attempted murder: a former cell-mate of João Cipriano, uncle and convicted murderer of Joana Cipriano, had allegedly offered information to Metodo 3, but after receiving payment, had failed to deliver and his life had been threatened as a consequence.

Francisco Marco, director of Metodo 3
Is that the kind of hired help that enhances the reputation of our good doctors?

Then there was Kevin Halligen whose company Oakley International, was paid £300,000 in 2008 to look for their daughter.

A 48-year-old man wanted by the FBI who allegedly defrauded people across the world, including the Madeleine McCann fund, was arrested last night at a hotel in Oxford.
Kevin Halligen, from Surrey, was hired by the Find Madeleine fund as a security consultant. His Washington-based company, Oakley International, was awarded a six-month £500,000 contract by the fund, but Mr Halligen allegedly disappeared with £300,000. He had allegedly boasted that his contacts in the US capital could provide high-tech satellite imagery to help the search.

He is also said to have made £1 million from links with Trafigura, the controversial Dutch company accused of causing mass illness after waste was dumped on the Ivory Coast.

What of the unpaid help and how that might affect one's reputation? Well, there's Brian Kennedy of double-glazing fame, who according to SOS Madeleine McCann was prepared to finance Kate and Gerry for the rest of his life. Does that mean out of his own pocket, should his business empire collapse owing to breach of covenants on loan agreements? (The Business Desk)

Oh dear! Is that the kind of support that is good for one's reputation?

And finally, Jim Gamble, of CEOP (Child Exploitation and Online Protection Centre) who produced the video, 'A Minute For Madeleine.' Jim Gamble was the senior police officer who presided over Operation Ore.

Operation Ore was a major police operation in Britain which became known to the public in 2002 targetting thousands of alleged users of child pornography websites. In the words of Wikipedia, the statistics were:

7,250 suspects identified, 4,283 homes searched, 3,744 arrests, 1,848 charged, 1,451 convictions, 493 cautioned, 879 investigations underway, 140 children removed from suspected dangerous situations (although the definition of what constitutes such, has varied and remains vague) and an estimated 39 suicides.

The work of journalist Duncan Campbell amongst others has already cast serious doubt over the integrity of the police investigation in Operation Ore.

As I write, Liverpool solicitor Chris Saltrese is taking a test case to the Appeal Court for wrongful conviction:

With the help of experts, Chris Saltrese Solicitors has carried out groundbreaking evidential and legal research into Operation Ore.
Some apologists have used Operation Ore to campaign for our current set of laws around child abuse. For example Margaret Moran MP who quoted incorrect and misleading statistics as fact in a debate in the House of Commons in 2005.

Characters such as controversial Senior Police Officer Jim Gamble, who presided over Operation Ore and has refused seriously to consider the possibility that significant mistakes were made, and perhaps some figures originally from the world of Child Protection Charities, will be in a very difficult position. (Matt Wardman.com)

The test case being brought by Chris Saltrese has been postponed until late 2010.

Concern about the prevalence and accessibility of child pornography has magnified in recent years with the growth of the internet.

The law is clear that it is a serious crime to intentionally access or possess such material.
However, when it comes to identifying intention and criminal acts in this complex ephemeral medium, there are many pitfalls ensnaring the innocent as well as the guilty.

It has since emerged that the blueprint employed to incriminate suspects was fundamentally flawed, so that many people may have been implicated in a crime they did not commit.
With the help of experts, Chris Saltrese Solicitors has carried out groundbreaking evidential and legal research into Operation Ore. Leave for appeal was granted for a test case before the full court in Spring 2010 but has been postponed. It is hoped it will be heard before the end of 2010. This will unveil fresh evidence and expert opinion. If you were wrongly convicted or cautioned in relation to Operation Ore, please get in touch and we may be able to assist. (Chris Saltrese)

So, for me, what kind of reputation does all this give to the McCanns? Simply in my opinion, what am I left with thinking? What do they have a reputation for and as?


Now, what kind of reputation is that?
Posted by AnnaEsse at 14:23 7 comments: