Inside Out, Back to Front and Upside Down!

On Monday 22nd, part of the programme, which airs at 7.30pm, will be concerned with, "Who are the Madeleine Foundation."? Well, who are they?

The Madeleine Foundation was set up in January 2008 with the following aims:

d) to ensure that the media, in particular the British media, report this case accurately and give due weight to all viewpoints on Madeleine’s disappearance

The Foundation has produced several publications, including, "What really happened to Madeleine McCann? 60 reasons which suggest she was not abducted." (Pictured below) 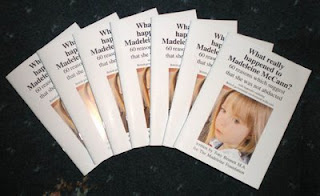 The members of the Madeleine Foundation have worked tirelessly over these nearly three years, sometimes attracting controversy - for example when they did a leaflet drop in the McCanns' home town of Rothley in Leicestershire - sometimes dealing with threats of legal action by the McCanns' legal team at Carter-Ruck (Yes, the company that represented General Pinochet and Trafigura, the oil company alleged to be responsible for wide-spread pollution in Africa) - but always managing to keep going with their main aim in mind: finding the truth about what happened to Madeleine McCann.

I support the Madeleine Foundation in its efforts to change the laws concerning the minimum age at which children should be left alone, and in its seeking to find the truth about what happened to Madeleine. So, I was initially quite pleased to see that the BBC was giving time to the Madeleine Foundation. However, call me cynical, but having read the synopsis on the Inside Out web page, I seriously doubt that the good people of the East Midlands are going to be presented with a very balanced view of the Madeleine Foundation and its work.

What happened to Madeleine McCann remains a mystery. Her parents were cleared of playing any role in her disappearance, but controversial group continues to campaign in support of a discredited detective who claims Kate and Gerry McCann covered up the truth. Inside Out investigates the members and motives of the Madeleine Foundation.

Yes, it remains a mystery. I have to say, though, that the Madeleine Foundation received a letter from Carter-Ruck (letters can be read on the MF web site) stating that the case must not be referred to as a 'mystery,' so, look out BBC!

Her parents were cleared? Well, no they weren't. The case was archived and the McCanns' arguido status lifted, but no one was 'cleared.' There was simply insufficient evidence to charge anyone, which is rather different.

And why describe Gonçalo Amaral, the senior police officer who coordinated the investigation, as 'discredited.'? That's hardly an unbiased description and not one held by the three judges who sat on the bench of the Appeal Court in Lisbon and overturned the ban on Amaral's book, "The Truth of the Lie." The judges decided that the book did not infringe any of the McCanns' rights, that it represented the facts as contained in the police files, and that Amaral with 26 years as a police officer, was qualified to give an interpretation of those facts (Read the full decision in English here)

Well, this group that 'continues to support,' the discredited detective - what kind of impression does that statement give? Does that make the Madeleine Foundation sound like a group of professional people, seeking justice for a small child? Or does it make them sound like they might be rather misguided? The latter, I would suggest. And we're probably getting a flavour of the slant of this programme before it's aired.

I hope I'm wrong, but reading the synopsis, I see - who are this bunch of people who support a discredited detective? What are their motives for pursuing this crazy objective? Well, I guess no publicity is bad publicity and at least more people will find out that the Foundation exists and some may be motivated to visit the web site and find out for themselves what the Madeleine Foundation is all about. I do hope so.

The following is a video, which was removed from YouTube for breaching terms and conditions, although it is simply a reading of the 48 questions which Kate McCann refused to answer in September 2007. These questions are in the public domain as part of the official police files and can be read on literally thousands of web sites.

The 48 questions Kate McCann refused to answer, by Tony Bennett. The questions can also be read on the video.

If you watch this programme, I would ask you to keep an open mind, if it's as biased as I think it may be. Kate and Gerry McCann were invited to take part, but I believe they turned down the opportunity.