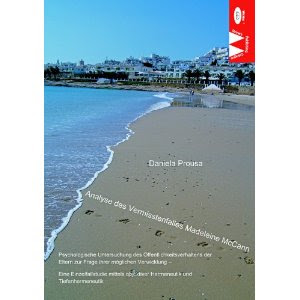 This 603 page book is written by German author and psychiatrist, Daniela Prousa. It is basically the author's conclusions about the case based on analysis of the personalities of the two main players, Kate and Gerry McCann.

Through analysis of their statements and what they said and how they behaved in public appearances, Daniela Prousa comes to a startling conclusion.

Prousa's conclusion is that Madeleine McCann died as a result of an accidental fall off the sofa, either immediately after her parents left the apartment or after Gerry McCann's check at around 9.10pm.

The author is also of the opinion that it was Kate McCann who initially found her daughter and that Gerry McCann came in later to support her in covering up.

In this weighty tome, the author refers to the opinions of Dr. Christian Ludke and also cites Dr Gonçalo Amaral's book.

For an excellent review of Prousa's book, see "McCann Exposure," Wordpress blog. Here is an extract:

Analyse des Vermisstenfalles Madeleine McCann is written by German author and psychiatrist, Daniela Prousa. It is essentially an interpretative phenomenological analysis (IPA) of the McCann’s given accounts regarding the disappearance of their daughter Madeleine McCann. Prousa examined in detail how the McCann’s make sense of and perceive significant events in their lives, namely the events conceived on the evening of May 3rd 2007, the night Madeleine disappeared. She obtained data from many written and visual expressions of the McCann’s, via their blog on their website, media statements and interviews and television appearances. During her study she asked curious and critical questions of their accounts, actions and emotions – verbal and non-verbal – such as “What is this person trying to achieve here?” and “Is something leaking out here that wasn’t intended?”

Through her analysis, Prousa concluded that Madeleine McCann died because of an accidental fall off the sofa, either immediately after her parents left the apartment or shortly after Gerry McCann’s check at around 9.10pm. Further, she believes that it was Kate McCann who initially found Madeleine and that Gerry came in later to support her in covering up the accidental death of their daughter.

Read the rest of the review Here
Posted by AnnaEsse at 10:42 1 comment: 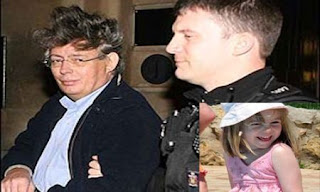 According to the Sydney Morning Herald, Kevin Halligen, the businessman whose company Oakley International was paid £300,000 by Kate and Gerry McCann to search for their daughter, will appear in court today, Thursday, facing extradition to the United States, to face charges of fraud and money-laundering.

So, how come this hasn't hit the UK media?* And how come the McCanns are not jumping up and down demanding their money back? They don't seem to have had much luck with their private detectives, do they?

The Sydney Morning Herald brings us news that the UK media appears not to be taking any notice of, which seems odd to me when anything vaguely smelling of McCann usually gets front page coverage in at least one tabloid. Don't Messrs Edgar and Cowley wish to question Mr Halligen about what he has done with all that dosh? Why so quiet intrepid investigators?

In The First Post, 23rd November 2009, we read that the McCanns were suspicious of Halligen from the start. Well, why hand over all that money? Didn't they learn to be more careful after the Metodo 3 fiasco, when they were promised that their daughter would be home by Christmas? So, let's ask the question: why aren't the McCanns on the list of people seeking recompense from Kevin Halligen? The money he was paid was supposed to be used in the search for Madeleine, so why no publicity today in the UK media about this man who swindled a 'vulnerable family.'? Maybe it just wasn't the McCanns' own money anyway and as far as that fund is concerned, it almost appears to be, 'easy come, easy go.'

More than two years after the disappearance of Madeleine McCann from the Portuguese resort of Praia da Luz, it has emerged that Kevin Halligen, a British security consultant hired by the Find Madeleine fund, allegedly conned detectives working on the case out of £300,000.

Halligen, whose firm, Oakley International, is based in Washington DC, was paid £500,000 by the fund to employ private investigators to look for the missing girl. But the Sunday Times has reported that he failed to pay them the money, and has now gone on the run. One detective, Henri Exton, a former national head of undercover operations for the British police, claims that Halligen personally owes him £100,000.

An unnamed friend of Kate and Gerry McCann said that they had suspicions about Halligen, a 50-year-old businessman with a colourful past, from the start. "He had this sense of cloak and dagger, acting as if he were a James Bond-style spy," the friend said. "He promised the earth but it came to nothing."

Another source claimed that Halligen promised to use his contacts in Washington to find satellite images of Praia da Luz and lists of telephone calls from the evening of May 3, 2007, but failed to do so. "All he came up with was a Google Earth image," the source said.

The Conservative MP for the McCann’s constituency of Charnwood, Stephen Dorrell, said: "This man clearly saw a vulnerable family going through a terrible ordeal and the only thing he was focused on was that there were people offering money to help find Madeleine."

A businessman whose firm helped look for Madeleine McCann and who is wanted in the US over an alleged STG1.3 million ($A2.24 million) fraud will face an extradition hearing on Thursday.

Irish national Kevin Halligen, 48, is accused by prosecutors in America of attempting to defraud a London law firm of $US2.1 million ($A2.4 million).

The defendant's assets were frozen after his arrest on November 24.

Officers acting on a request from US law enforcement agencies detained Halligen after finding him in a hotel in Oxford where he had been staying under an assumed name.

The alleged crimes for which he is wanted in the US relate to money taken from a Dutch company, Trafigura, as part of a deal to secure the release of executives under arrest in the Ivory Coast.

Instead it was spent on, amongst other things, a mansion and a gift to his girlfriend, it is alleged.

The businessman's firm Oakley International had been employed by Kate and Gerry McCann for about six months in 2008 to look for their missing daughter.

The extradition hearing will take place at City of Westminster Magistrates' Court.