Gerry McCann, wtf are you talking about? 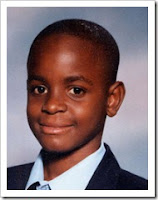 On day 302 since the disappearance of Madeleine, Gerry McCann makes an entry in his blog about a couple of charities involved with missing and abducted children. Gerry refers to the Missing People organisation with whose representative he says he had a meeting.

"Missing People were responsible for displaying Madeleine’s image on Marble arch, along with 2 other missing children last summer. It was heartening to hear today that one of those children was recovered as a direct result and the other has also been successfully returned to his family."

Here Gerry refers to the display of images of three children, projected onto Marble Arch in May 2007.

"Her picture featured on a huge projected poster along with two other missing children, Javian Matthews, 14, from London and Samantha Osborn, 15, from Buckinghamshire who both disappeared in April this year."

Javian Matthews is reported as having been found, though I cannot find very much in the way of details about his return to his family. Ellee Seymour reports the good news about Javian on her blog. Scroll down to comments.


Excellent news, Javian has been found. I have had this email from Missing People:

I have just seen your latest missing case.
Javian Matthews was found on 25 May 2007.

Some websites have out of date information on them. We have noticed SKY news site has 5 cases that have now been found. http://news.sky.com/skynews/madeleine

Javian was found the day after his image was projected on Marble Arch and media coverage. I have no idea if there is a connection and if it helped reunite him with his family, I would assume it did."

So, let's return to what Gerry McCann has written in his blog.

"It was heartening to hear today that one of those children was recovered as a direct result and the other has also been successfully returned to his family."

Gerry, are you implying that this information was given to you at your meeting with a representative of the Missing People organisation? The reason I ask this is that I am quite sure that that organisation is well aware of the situation regarding Samantha and I doubt they would say she had been, "recovered," and she has definitely not been reunited with her family.

Did they really say that about Samantha, Gerry? And just what do you understand by, "recovered."? Samantha disappeared aged 15 and it was thought she had left home to meet a man she had met on the internet. Her, "recovery," if such it was, took the form of Samantha's contacting the police soon after her 16th birthday and arranging to be interviewed at the home of David Manning, the man in his 20s, whom she met on the internet. She is still, to my knowledge, living with David Manning. A few months ago, a schools truancy officer paid her a visit as she is under school-leaving age and has not been attending any place of education.

Would you still say that Samantha had been, "recovered," Gerry? And do tell us; where on earth did you get that information from? I would be surprised if Missing People were to describe Samantha as having been, "recovered." Her whereabouts discovered maybe, but she has hardly been, "recovered." And I repeat, Gerry, she has not also been reunited with her family.

For more information click on the link in the menu on the right, "Samantha Osborn."

That doggie can sniff through concrete! 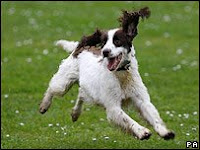 Eddie, that amazing doggie, trained by South Yorkshire police officer Martin Grime, has been helping the Jersey police with their investigations at the former children's home, "Haut de la Garenne." Here is some information from the BBC about Eddie, his training and his remarkable skills.

"A child's remains were discovered under several inches of concrete at a former children's home in Jersey after police bought in dogs to search the site. But how can they sniff through concrete?"

Eddie is described as, "an advanced human remains discovery dog," in the UK press and as a, "cadaver dog," in US parlance. By Philomena McCann, Eddie is referred to as, "Lassie," who would bark at anything! So, Philomena, now that Eddie has found human remains under several inches of concrete, do you really think he barks at anything or that he reacted to the scent of soiled nappies and rotting meat?

"Jersey Police said the seven-year-old dog located parts of a child's body even though they were buried under several inches of concrete. So how did he do it?"

"The specialist training techniques - which are highly confidential - were developed by Eddie's handler Martin Grime, along with the UK's National Policing Improvement Agency (NPIA) and America's Federal Bureau of Investigation (FBI)."

"We don't discuss what the training involves, but it's a lot more than putting bits of meat on the ground for them to hunt out," says Mr Grime, a retired South Yorkshire Police officer who now works as an independent consultant."

"A standard sniffer dog is like a basic tool. An enhanced dog goes through much more training and is a lot more discriminating about smells, basically its nose is super sensitive. It's also about getting the dog to really focus on a task."

"Other dogs have to do other police duties but mine work full-time in this area, making them very sharp and highly skilled."

The dogs have been used by police forces across the world and were called in to help with the Madeleine McCann investigation."

So, there we have it! Eddie has not been trained using bits of meat nor do I imagine is he fooled by bits of meat in the course of his work. He is specially trained to sniff out human remains and he has shown his effectiveness in Jersey by sniffing out the skeletal remains of a child, hidden, it is thought, since the 1980s.

Will this help Philomena to change her mind about, "Lassie."? Perhaps it will give more credence to the way that Eddie reacted to traces of bodily fluids alleged to have been found in the vehicle Kate and Gerry McCann rented 25 days after their daughter's disappearance.

Eddie's reactions are not thought to be solid evidence in themselves and the samples analysed by FSS are reported to be, "inconclusive," but there are probably a few people changing their minds about the reliability of Eddie and his friend Keela.