Madeleine; Kate and Gerry to be cleared?


Since the statement a few days ago by Alipio Ribeiro, head of the PJ, that the McCanns may have been made arguidos in a hasty manner, the Portuguese and Spanish press have been speculating that Ribeiro was paving the way for the McCanns to be cleared of suspect status and the case to be shelved. This has been taken up by the UK news media.

The Daily Star refers to 40 questions, which the PJ would like the McCanns to answer. These are the questions, which it was reported that Kate McCann refused to answer in the course of her interviews in September, when she was given the status of arguida, formal suspect.

The, "official letters," to which the Daily Star refers, are the, "rogatory," letters, which were months in preparation by the Portuguese authorities. These were sent to Jacqui Smith of the UK Home Office via Eurojust, an organisation based in The Hague, whose purpose is to facilitate legal correspondence between EU countries. The letters were returned to Lisbon by the Home Office as they were apparently not sent through the correct channels. It seems that the letters are on their way again and the PJ is awaiting a response from the Home Office.

The Portuguese e-xpresso carried a report yesterday, Saturday 9th February, that the PJ has no evidence against the mcCanns.

Translation by lisbonirish on the Three Arguidos forum. *

The headline reads, "PJ without proof [or evidence] against the McCanns."

"The Polícia Judiciária has no evidence or any leads against the McCanns. The couple will only remain arguidos in the case if the responses to the letters of request, which were sent to Britain this week, reveal any striking contradictions to previous statements."

"Despite the fact that the team investigating Maddie's disappearance has been the same since the beginning (lead in the field by Chief Inspector Tavares de Almeida and Inspector João Carlos Pereira), with only the coordinator Gonçalo Amaral being replaced by Paulo Rebelo, there have been no developments in the PJ's lines of investigation. The case has been reviewed by homicide specialists, but without results."

"Police in Portugal are set to clear the parents of Madeleine McCann of involvement in her disappearance, according to reports.

The Portuguese press has reported that detectives are to re-interview Kate and Gerry McCann then announce they are no longer official suspects.

Legal experts are quoted as saying they believe the police will close the case without charging anyone over Madeleine's disappearance.

The news comes after Carlos Anjos, the head of Portugal's police federation, said officers had "bigger problems" to deal with than the search for Madeleine.

Madeleine vanished from the family's holiday apartment in Praia da Luz on May 3 last year, just before her fourth birthday."

"POLICE are to give Kate and Gerry McCann the chance to clear their names over daughter Maddie’s disappearance.

The couple, who have been official suspects in the case for five months, will be asked by Portuguese detectives to respond to 40 questions.

Sources say that unless there are “screaming contradictions” the couple will be cleared.

Last night the McCanns’ spokesman Clarence Mitchell said the sooner they are questioned the better.

He said: “There won’t be any screaming contradictions and hopefully the emphasis can then be put on finding Madeleine, who we believe is still alive.”

Legal letters outlining the 40 questions are to be sent to the Home Office this week. Interviews are then likely to be carried out by detectives from Leicestershire police, the McCanns’ local force.

He said: “Any sensible person realises Madeleine was abducted.

“We didn’t anticipate being in this position after nine months.”

Barcelona-based Metodo 3, the private investigation firm working for the McCanns, currently has ten men “on the ground” in Praia da Luz searching for the four-year-old.

They also have operatives in Spain, North Africa and elsewhere across the globe.

John McCann added: “Until somebody comes up with something to say otherwise, we will never stop looking for Madeleine.”

Meanwhile, a British photographer once linked to Maddie’s disappearance has revealed why he mysteriously fled Praia da Luz.

Christian Ridout, 32, said he was driven out after receiving death threats from locals following accusations he groomed an under-age girl for sex in 2005.

Ridout, who has since changed his name to Dexter Troy and now works in Los Angeles, insisted the allegations were lies ."

Posted by AnnaEsse at 10:13 No comments:

Madeleine: another look at photographic anomalies 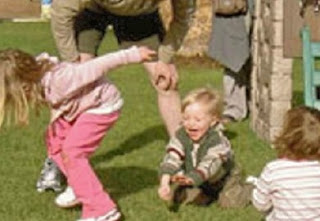 Madeleine and Sean in the children's play area at the Mark Warner resort in Praia da Luz, May 2007 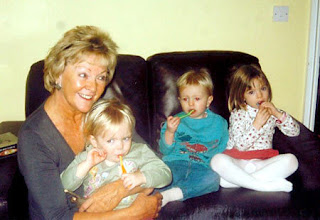 The photograph above shows Madeleine and the twins with their grandmother, Mrs Healy, before the McCann family went on holiday to Portugal.

I would suggest that the anomaly here is that Sean looks older and physically more mature in the pre-holiday photograph. Very strange, eh?

Posted by AnnaEsse at 09:39 No comments: