Josef Fritzl may never stand trial. If his heart doesn't kill him, the other inmates might! 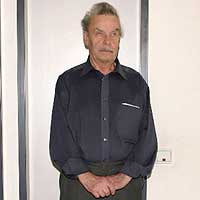 Authorities in Austria are concerned that Josef Fritzl, who kept his daughter locked in a cellar for 24 years and fathered seven chilren by her, may never stand trial. Originally, it was predicted that the trial would start in the autumn this year. However, prosecutors now feel that it may be two years before Elisabeth Fritzl and her children, who were confined with her, may take at least two years to be ready to give evidence at a trial.

Meanwhile, it is reported widely that Josef Fritzl is afraid to leave his prison cell for fear of being attacked by fellow prisoners.

"Violent lags there call him Satan and have vowed to kill him."

"Inmates at the prison where Josef Fritzl is locked up have branded the Austrian criminal "Satan" and vowed to kill him, a former prisoner has claimed.

Fritzl, who held his daughter captive for 24 years in an underground den and had seven children by her, has refused to leave his cell for fear of being attacked, according to the inmate.

"At night the other cons shout out 'We're going to get you Satan, come out and play', and they bang on the door when they walk past his cell," he was quoted in the Austrian Times as saying."

And then there's Fritzl's heart condition.

"Cellar monster Josef Fritzl could cheat justice by dying before his trial, it was feared last night.

The 73-year-old has a heart condition and doctors want to test him for an unspecified blood disease.

An inmate released from the Austrian jail where Fritzl is being held, said: "He really looks unwell. He's lost a lot of weight and hasn't left his cell for fear of being attacked. He is suffering."

"London: Austrian incest fiend Josef Fritzl, who imprisoned his daughter in a cellar for 24 years and fathered seven kids with her, might never face trial for his evil deeds, it has emerged."

"Police officials fear that the 73-year-old brute who has a heart condition – will die in prison before his victims reveal exactly what happened to them."

"They say daughter Elisabeth, 42, is still too traumatised to be quizzed, reports The Sun."

"And police have been unable to question the three of her seven kids fathered by Fritzl who also lived in the cellar.

Medical experts have warned cops it could be two years before the victims reveal all about the cellar in the Austrian town of Amstetten."

So, there we have it. After 24 years of doing what he liked with his daughter's life, he may never be punished for his crimes. I guess he is already being punished since his liberty has been taken from him and I am sure he already knows that he will never again see the light of day outside of a prison. For justice to be done, though, perhaps we should hope that he will eventually have to stand in a courtroom and face what he has done.
I do wonder if it would be a welcome release for Elisabeth and her children if they did not have to go through that. If Josef Fritzl were to die before the case came to trial, Elisabeth and the children could possibly just get on with trying to make a life for themselves and not have to face the glare of the world's media and they would know that the man being called, "The Austrian Monster," was gone from the world and their lives.
Posted by AnnaEsse at 14:48 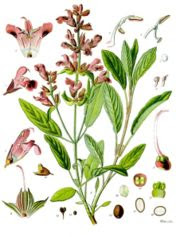 I have a herb garden and I use herbs in a variety of ways. I use them in cooking and in salads and I also use them as home remedies.

Herbs have been used medicinally for thousands of years and plant extracts form the basis of many well-known medicines:

Aspirin is derived from a willow. The active constituent of the plant was extracted refined and pressed into tablet form and aspirin has been more widely used possibly than any other pharmaceutical product since its introduction to the medicine counters. It is anti-inflammatory and also has blood-thinning properties. The most common side-effect is irritation of the digestive tract. This is because only what is seen as the active ingredient in the plant is used. The willow, from which aspirin was originally derived, produces other compounds which act synergistically with acetylsalicylic acid to soothe the digestive tract. I call this left-brain thinking! I guess there is some logic in it. If we identify what looks like the active ingredient and extract it, then we may increase its efficacy and we also produce a more potent remedy.

I am going to start a series of posts looking at various herbs and their properties. Most of the ones I mention can be grown in a small space in your garden, in a tub or bed, or even in a window box. There is not likely to be any particular or logical order to how I list the herbs. Perhaps I will list alphabetically after a few posts! For now, just as I think about them!

Since I have been talking about aspirin, which we all know has been a popular headache remedy since its introduction in 1899, I shall start with feverfew.

Feverfew: this is a traditional remedy for migraine. The plant is bushy, grows to a height of about 18" and spreads rapidly.
Feverfew has been used for reducing fever, for treating headaches, arthritis and digestive problems. It is thought to stop the inflammation of blood vessels in the head and therefore to inhibit the spasm of blood vessels, causing migraine.

Feverfew is available from many health and wholefood stores in tablet and capsule form, but some herbalists believe that it is more efficacious if used in its natural form. Many garden centres stock the plant, and as I said, it spreads quickly. It is just as happy in a container as it is in the ground.

Tablets/capsules: use as directed by the manufacturer.

Plant: chew one leaf a day. Don't expect and instant cure! Natural remedies tend to take longer than pharmaceuticals. So, be patient. Feverfew in plant form or tablet form will not stop a migraine once it has started. Its benefits are preventative. So, if you are prone to migraine, get yourself a plant and start religiously chewing a leaf every day. Be warned, though, it tastes revolting!

Sage: very popular culinary ingredient and also has many medicinal properties, indigestion, throat and mouth problems being the most common uses.
Indigestion: one teaspoon of the fresh herb, chopped finely and brewed for five minutes in a cup of boiling water.
Mouth and throat: as above. Gargle with the brew when it's cool enough not to burn your mouth!
Sage is also available in tablet form from health and wholefood shops, but so easy to grow.

Black cohosh: a traditional remedy for menopausal problems and PMS. Taken as a herbal tincture, in tablet or capsule form.

Valerian: a common ingredient in natural relaxation remedies and for insomnia. Best used in a combination remedy with other herbs. Can be bought as tablets, herbal tincture or as the loose herb.
Loose herb: one teaspoon brewed for five minutes in a cup of boiling water. For insomnia, drink one hour before retiring.
Best used in combination with: chamomile, hops, vervain, scullcap and passiflora, all of which are readily available from wholefood shops. Scullcap is comparatively expensive, but all of the others are very cheap to buy as loose herbs.

To finish with today, here are the lists of ingredients in my special, "Sleep Tea," and, "Digestive Tea."

Leave me a message if you would like the recipe (proportions of ingredients) for either of the above special teas.