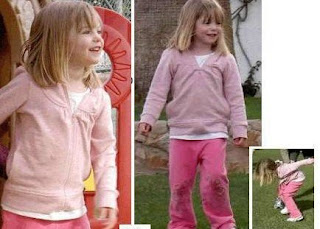 This is a long series of articles from October 2007, which appeared on the Enfants Kidnappés site. All are in English.

It is very interesting to look back at what was being written at that time in online journals like Enfants Kidnappés.

The above three photos are of Madeleine, taken during the holiday in Praia da Luz. Something quite intrigues me in comparing the three photos. The photo in the middle shows a child who looks proprtionately like a three/four year-old. The child on the right, in the small photo, appears to have longer legs! Do you think that if the child in the middle photo bent over like that, that her legs would look so long and slim or that those trousers would not slip up round her ankles just a little? To me, the child bending over in the small photo looks more like a six/seven year-old. My eyes must be deceiving me!
Posted by AnnaEsse at 12:53 6 comments:

Today, Sunday March 23rd, many of the newspapers and online news media lead with the story that Robert Murat's computers and other possessions, which were seized by the PJ last year, have been returned. Mr Murat is now hoping that his status as arguido, official suspect, in the Madeleine McCann case is about to be lifted.

Something that has drawn my attention in all of the reports is the almost exact wording of what has been published.

The Independent On Sunday

"Portuguese police have returned computers and other possessions they seized from Madeleine McCann "suspect" Robert Murat, he said yesterday.

He described the move as a "very positive sign" – but is still waiting to be officially cleared of involvement in the young girl's disappearance.

Mr Murat, 34, lives just yards from the holiday apartment in the Portuguese seaside resort of Praia da Luz where Madeleine vanished on 3 May last year."

"Portuguese police have returned computers and other possessions seized from Madeleine McCann suspect Robert Murat, he has said.

He described the move as a "very positive sign" - but is still waiting to be officially cleared of involvement in the British girl's disappearance.

Mr Murat, 34, lives just yards from the holiday apartment in the Portuguese seaside resort of Praia da Luz, where Madeleine vanished on May 3 last year."

"Portuguese police have returned computers and other possessions they seized from Madeleine McCann "suspect" Robert Murat, he hassaid.

He described the move as a "very positive sign" - but is still waiting to be officially cleared of involvement in the young girl's disappearance.

Mr Murat, 34, lives just yards from the holiday apartment in the Portuguese seaside resort of Praia da Luz where Madeleine vanished on May 3 last year."

The timing of the return of these items in interesting in the light of reports that the Portuguese police are due to arrive in the UK on April 7th to observe the questioning of members of the tapas group and others in line with the rogatory letters sent earlier by the PJ. The return of Murat's computers must mean that the PJ no longer consider them as important for evidence purposes.

The date on which the PJ inspectors are due to arrive must now be official as this is being reported by several newspapers, including the Mail On Sunday.

This is the headline from the Mail On Sunday, though we read that actually the questioning will be of the Tapas Seven, since the police have been refused permission to re-question Kate and Gerry by the Public Prosecutor.

"A source close to the case said: "The Policia Judiciaria had prepared various questions it wanted Kate and Gerry to face but they were crossed off the list of priorities on the advice of public prosecutors.

"They felt it was a waste of time because the McCanns would refuse to answer the questions, a right that Portuguese law grants official suspects."

If this is true, what happened to the previous claim by Clarence Mitchell that the McCanns, as well as their friends, were keen for the PJ to arrive and that they would co-operate fully in order to have their arguido status lifted?

The Mail On Sunday lists a few of the inconsistencies which may be of interest to the PJ.

"They are thought to be particularly keen to reinterview David Payne, Jane Tanner and her partner, Russell O'Brien."

"Dr Payne, 41, a cardiovascular researcher from Leicester, was the last person outside the McCann family to see Madeleine at the Ocean Club in Praia da Luz on May 3. Gerry asked him to check on his wife and children while he was having a tennis lesson at about 6.30pm.

Dr O'Brien, 36, from Exeter, was away from the group for up to 45 minutes between 9.30pm and 10.15pm tending his own child who was being sick in his apartment.

He told police he had changed her bed linen, but staff at the Ocean Club deny any change of sheets was requested.

Attention has also focused on 36-year-old Miss Tanner's claim that she saw a man carrying a girl from the McCanns' apartment at about 9.15pm - when another witness says he was outside the flat at the same time but did not see her or the mystery man.

The trio have denied reports they intended changing their original police statements. The McCanns' spokesman Clarence Mitchell says the friends are keen to help police and want the reinterviews to take place as soon as possible."

Meanwhile, the Sunday Express heads its front page with a reprint of the apology to the McCanns, "Kate and Gerry McCann: Sorry." I haven't read the apology in today's Express, but I am sure it's the one printed earlier in the week in which the Express proclaimed the McCanns completely innocent of any involvement in their daughter's disappearance. Strange that! I thought only a court of law could proclaim someone innocent as a result of a case being heard in court.

The Scotsman today: ""Dani Garavelli: End of the paper trial."

"Since we have no idea which particular articles were the subject of the libel action, the victory doesn't set out the limits of press freedom either. The Express's apology – "we accept Kate and Gerry are completely innocent" – is being read by some as an acceptance that any scrutiny of the couple's behaviour was beyond the pale, but that is clearly not so.

It was perfectly acceptable to question the wisdom of leaving three toddlers alone in a holiday apartment or to try to assess the strength of the evidence the Portuguese were acting on when they made Kate and Gerry arguidos. So at what precise point did the Express cross the line? Was it when it carried conflicting reports of the DNA evidence found in the McCanns' hire car, or when it drew an inference from the fact Maddie's "cuddle cat" had been washed? Because these issues were never aired in open court, we will never know."

The Portuguese police are hoping that the questioning of the Tapas Seven and others will help to shed light on the disappearance of Madeleine McCann and, I am sure, bring this case to a conclusion. In my opinion, this case can only be satisfactorily resolved when Madeleine McCann is either found alive or her body is found and she is finally laid to rest.

I wish the Portuguese police good luck in their quest for justice for little Madeleine McCann and commend them in their persistence with this case.

Posted by AnnaEsse at 09:38 No comments: