Obama: 48 years without releasing any documents. 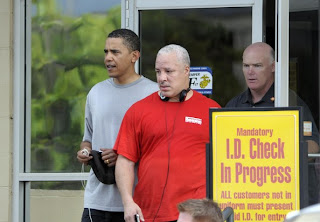 Obama has lived for 48 years without leaving any footprints — none!

There is no Obama documentation — no records — no paper trail — None.

University of Chicago scholarly articles — None

Binyan Mohamed was traveling on a false passport, and he wondered why the British authorities needed to be involved in investigating his background! 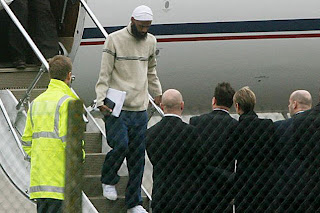 "In the first interview since his release, Mohamed, an Ethiopian refugee who worked as a cleaner at a West London mosque, released memos which reveal MI5 fed questions to his interrogators."

So, MI5 fed questions to his interrogators. Let's think about why they might have done that.

"He said he wanted to go to Chechenya as an aid worker but was told he would need "basic training" and and joined an Afghan camp for six weeks."

"He was arrested in Pakistan in April 2002 as he tried to fly back to London on a false passport and said he was chained to the top of the door of his cell by his wrists for 22 hours, beaten with a wooden stick, and a gun was put to his head."

And let's see: he was trying to fly back to London on a false passport. Now, it seems to me that if he was holding a false passport, the authorities would want to investigate his background, hence the questions, as quoted on the Today programme, that he said MI5 fed to the interrogators, questions like, his address, his job, his associates. Someone who had just come from Afghanistan, trying to fly out of Pakistan on a false passport and he thinks it's somehow highly irregular for the British authorities to become involved to try to establish his true identity and background?

Binyam Mohamed appears to contradict himself quite a lot here on significant details. He needed basic training as an aid worker and joined an Afghan camp for six weeks or he "he left Britain for Afghanistan in May 2001 to learn more about his religion," or were these different trips? One where he went to be trained as an aid worker and one where he went to learn about his religion?

In the interview aired by the Today programme Mohamed was asked why he had gone to Afghanistan. He said that people had told him that Afghanistan was where the "real Islam," was to be found. Really? What people? Well, he was quite vague about who these people were, but I would have thought that "real Islam," could be found elsewhere, like Pakistan, maybe, and in studying his religion there, he might have avoided the ongoing problems in Afghanistan, but then he was arrested because of his false passport, I believe. I think this was what drew the attention of the authorities. So, I would ask again: why the need for a false passport if he was just trying to find out about his religion and this was just a totally innocent trip?

Those who have nothing to hide don't need to travel on false passports. The Today programme did not air the full interview and if the question of the passport was raised, it wasn't in the extracts we heard this morning. I would hope that the judicial enquiry would focus on this issue and also on the issue of Mohamed's remaining in the UK. He has not been tried and so he has not been found guilty of any offence, but then neither has he been found innocent.

A freshman representative has introduced a bill to the U.S. Congress that would require presidential candidates to provide a birth certificate and other documents to prove their eligibility to occupy the Oval Office.

According to the Library of Congress' bill-tracking website, H.R. 1503 would "require the principal campaign committee of a candidate for election to the office of president to include with the committee's statement of organization a copy of the candidate's birth certificate, together with such other documentation as may be necessary to establish that the candidate meets the qualifications for eligibility to the Office of President under the Constitution."

George Cecala, a spokesperson for Rep. Posey's office, told WND that constituents had been calling, questioning whether Barack Obama – who has publicized a Certificate of Live Birth, but not his official birth certificate – has demonstrated that he meets the Constitution's requirement to be a natural-born citizen.

"Those are legitimate constitutional concerns," Cecala said. "Folks have brought the issue up, and the court really hasn't clarified. And I think American citizens have a right to have answers from their government."

Where's the proof Barack Obama was born in the U.S. or that he fulfills the "natural-born American" clause in the Constitution? If you still want to see it, join more than 325,000 others and sign up now!

"When seven-year-olds play soccer in Brevard County, to be in Little League they have to prove their residency," Cecala said. "To be president there are three requirements: one is citizenship, two is the age of 35, and three, you have to have been a resident for 14 years. We're simply saying when you file your statement of candidacy with the FEC, you should also file documentation that you fulfill the three requirements to be president.

"There's two standards here," Cecala told WND, "one for Little League and one for president."

"Opponents of President Bush used the 2000 election results and the court decisions to question the legitimacy of President Bush to serve as president," explained Rep. Posey in an official statement. "Opponents of President Obama are raising the birth certificate issue as a means of questioning his eligibility to serve as president. Neither of these situations is healthy for our republic. This bill, by simply requiring such documentation for future candidates for president will remove this issue as a reason for questioning the legitimacy of a candidate elected as president."

Cecala further told WND that there's no political motivation in proposing the bill, and the Congressman hopes passing the bill will help clear the air for the president, enabling the government to get beyond the election controversy to dealing with the nation's other important issues.

"Once we pass this bill, we can be assured that future elections won't have this problem," Cecala said. "It's not an attack on President Obama; it's just clarifying for future elections."

Cecala also explained that if passed, the amendment to election law would require Obama, just like any other candidate, to provide a birth certificate in any future presidential elections.

H.R. 1503 has been referred to the House Committee on House Administration.

WND has reported on dozens of legal challenges to Obama's status as a "natural born citizen." The Constitution, Article 2, Section 1, states, "No Person except a natural born Citizen, or a Citizen of the United States, at the time of the Adoption of this Constitution, shall be eligible to the Office of President."

Some of the lawsuits question whether he was actually born in Hawaii, as he insists. If he was born out of the country, Obama's American mother, the suits contend, was too young at the time of his birth to confer American citizenship to her son under the law at the time.

Other challenges have focused on Obama's citizenship through his father, a Kenyan subject to the jurisdiction of the United Kingdom at the time of his birth, thus making him a dual citizen. The cases contend the framers of the Constitution excluded dual citizens from qualifying as natural born.

Although Obama officials have told WND all such allegations are "garbage," here is a partial listing and status update for some of the cases over Obama's eligibility:


In addition, other cases cited on the RightSideofLife blog as raising questions about Obama's eligibility include:

A California court has ruled that apparently anyone can run for president on the California ballot – whether or not they are eligible under the Constitution of the United States.

"Secretary of State Debra Bowen contends that there is no basis for mandamus relief because the Secretary of State has no 'ministerial duty' to demand detailed proof of citizenship from presidential candidates," said Judge Michael P. Kenny. "The court finds this argument persuasive."

(Read the whole article on the WND web site.)

If Rep Posey's bill is passed through Congress, in four years time, if Barack Obama is still president, if none of the current lawsuits has succeeded in requiring Obama to produce proof of eligibility, he would be required, at that time, to produce the appropriate documentation were he to stand for re-election.