Kate and Gerry McCann "Torn apart by his lies," to continue with libel action against Gonçalo Amaral. 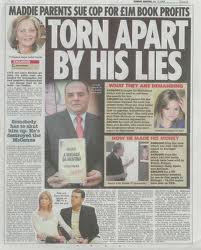 The news this week that the Lisbon Court of Appeal had overturned the ban on Gonçalo Amaral's book, "A Verdade da Mentira," (The Truth of the Lie) elicited the following response from a spokesperson for the McCann family:

"A spokesman for the McCann family said the decision did not stop the defamation case. "The defamation action against Mr Amaral is very much continuing," he said." The Guardian 19/10/10

And this, in the light of the fact that the Appeal Court judges considered that:

“The contents of the book does not offend any of the fundamental rights of the applicants [the McCann couple and their three children]” and “the exercise of its writing and publication is included in the constitutional rights that are assured to everyone by the European Convention for Human Rights and by the Portuguese Republic’s Constitution”, reads the decision, to which JN [Jornal de Notícias] had access. ( Joana Morais)

It could be considered that the McCanns' decision to sue Gonçalo Amaral in the first place was rather ill-considered. Perhaps their success with their claim against the Express newspaper group helped them get that confident, onto a winner, feeling.

What might ordinary Joe Public do if there were potentially damaging press articles about him? He would have recourse to take his complaint to the Press Complaints Commission and if he had no joy there, perhaps to take legal action, though since Joe Public would be unlikely to get Legal Aid, this course of action might not be available to him. Still, the PCC is there for, as the name sounds, complaints against what is written in the press. Did the McCanns consult the PCC before taking legal action against Express newspapers? No, they didn't!

"Baroness Buscombe, the chairman of the Press Complaints Commission, today defended the regulator's failure to launch an inquiry into press coverage of the disappearance of Madeleine McCann in 2007.

Buscombe, who took up her role in April last year, was speaking after the House of Commons culture, media and sport select committee criticised the PCC for staying silent for 10 months after McCann went missing while newspapers were apparently breaching its code of practice.

"In any other industry suffering such a collective breakdown ... any regulator worth its salt would have instigated an inquiry," the MPs said in their report. "It is an indictment on the PCC's record, that it signally failed to do so."

But Buscombe said the PCC had been constrained to act because the McCann family had not made a formal complaint to the watchdog about newspaper coverage.

The McCanns instead took legal action that resulted in a £550,000 payout from Express Newspapers, a private settlement with Associated Newspapers and an apology from the News of the World.

"It's very important to put it in context," Buscombe told The Media Show on BBC Radio 4 today.

"What actually happened was that as soon as the story broke, the PCC was very much in touch with the McCann family and repeatedly offered to help.

"The McCanns and the PCC over the months that followed were in touch and indeed Gerry McCann in this inquiry actually praised the PCC for helping very much in terms of privacy matters relating to their other children."

Buscombe said the PCC had held "numerous discussions internally" about the McCann case.

"The difficulty that it had was that it's very difficult for a self-regulatory body such as ours to actually pre-empt and decide in some ways whether a headline or statements that are being made are something that we should be tackling without proper engagement of the complainants."

The important points I would extract from the above article are:

1) As a self-regulatory body, the PCC was constrained from acting without formal complaints from the McCanns.

2) The PCC offered to help the McCanns.

3) Instead of accepting PCC assistance, and making formal complaints, the McCanns launched legal action and were awarded £550,000 as an out of court settlement from the Express Group.

The problem is, I guess, that making formal complaints and possibly extracting retraction and apologies via that route does not net any cash! Just let the newspapers get on with it and then sue them! Good little money-spinner there! (This blog 24/02/2010)

It might even be considered that the McCanns were not particularly bothered about Gonçalo Amaral's book until it looked as though it was about to be published in the UK, after all the book was published in July 2008 and the McCanns did not initiate legal action until May 2009. It also might be considered that they weren't particularly bothered about the book until they found out how many copies it had sold in Europe and how much money could have been made from it.

The McCanns decided on the figure of £1 million (£1.2 million Euros) as the sum they wish to claim for defamation against the former PJ police officer. Now, where did they get that figure from?

What they are demanding

£430,000 damages for Madeleine which will be used to continue the search for her.
£215,000 for each parent for the emotional distress the book has caused them. They say they suffer 'permanent anxiety, insomnia, lack of appetite, irritability and an indefinable fear'. The writ also says Kate McCann is 'steeped in a deep and serious depression'.
£86,000 for each of their twins Sean and Amelie, who could hear his allegations when they start school in September.

How he made his money

For me, it looked rather like Mr Gerry and Mrs Kate did a few sums and, having worked out that there was a bit of dosh there, decided that Dr Amaral was worth suing, just like the Express was worth suing!

Gonçalo Amaral's book was not the first to question the McCanns' version of events in the disappearance of their daughter.

So, it rather looks like the McCanns waited, once again, to take legal action, this time until it appeared that Gonçalo Amaral had made a significant amount of money from his book, and was therefore worth suing. One wonders why the McCanns didn't sue the author of the book A Culpa dos McCann (The McCanns' Guilt.) Manuel Catarino. Never heard of this book, whose publication pre-dates that of Gonçalo Amaral by seven months? Perhaps that's why the author has not been sued! The book didn't sell! He wasn't worth suing! (This blog 24/02/2010 - link above)

Looking again at what the McCanns are demanding in the way of damages from Gonçalo Amaral, it's worth noting the psychological damage claimed.

£215,000 for each parent for the emotional distress the book has caused them. They say they suffer 'permanent anxiety, insomnia, lack of appetite, irritability and an indefinable fear'. The writ also says Kate McCann is 'steeped in a deep and serious depression'.

Now, for me, the above could be a description of how a parent may react following the loss of a child. It would accurately describe how my own sister suffered, several years ago, following the tragic death of her baby daughter, but when Kate McCann was interviewed for the BBC's Woman's Hour in August 2007, she did not appear to be suffering from insomnia at that time.

Kate McCann: ..... Kate interupts Jenni, just as Jenni gets her question acrossWe tend to, we tend to have, replies to Jenni's question with 'Yeah' then carries on dinner together, certainly still lunchtimes and evening meals are spent together as a family. And I describe those as very normal.

Large audible intake of breath Ermm, sleeping through the night, yes. I do actually. I mean, the first four or five days was ermm, does that tongue clicking noise I didn't sleep really, ermm, as I mentioned earlier it was very hard t.. to function at all. Ermm, but now I'm fine, actually I don't I'm usually quite tired to be honest by the time we get to bed. But I haven't had any problems sleeping.

So, in August 2007, Kate McCann confidently told the BBC's Jenni Murray that after the first four or five days following her daughter's disappearance, she had no trouble sleeping, yet the publication of Amaral's book led to insomnia? Her daughter's disappearance didn't provoke such a reaction, but the book did? One wonders if it was the thought of Dr Amaral possibly making all that money that was keeping Mrs Kate awake at night!
The writ also says Kate McCann is 'steeped in a deep and serious depression'.

A deep and serious depression? So, when did that come on? When the book was published? Well, no way of knowing that, really, since it wasn't mentioned until 10 months after the publication. In the weeks and months after Maddie disappeared, depression, anxiety and fear would have been a "normal," if I can use that word, reaction from a woman who had lost a child to an abductor who had snatched her from her bed in a foreign country. However, on what would have been Maddie's fourth birthday, Kate McCann looks so radiant as she leaves the church in Praia da Luz, you'd think she'd just got married or won the lottery!

And just a few weeks later!

I'm sure there is no need for me to remind anyone just how the McCanns courted the media, from all those early photos of the couple walking hand-in-hand along the beach in Praia da Luz, the interviews, the statements from the couple whenever a small child went missing anywhere around the globe, the sightings and rumours of sightings and interviews about how the Portuguese police failed to follow up the sightings etc etc.

The British media has been curiously silent this week following the decision from the Lisbon Court of Appeal that "A Verdade da Mentira," can now go back on the bookshelves in Portugal. And apart from 'a spokesman,' telling us that the libel action is going ahead, and Kate McCann stating that the decision was, 'unbelievable,' the depressed and insomniac couple have also been uncharacteristically quiet.

Going ahead with that libel action? Oh dear! A fine mess you may have got yourselves into! The Court of Appeal judges are of the opinion that the book does not infringe any of your fundamental rights and now Dr Amaral is considering legal action because his rights have been infringed! Oh dear!

"Gonçalo Amaral to countersue the McCanns."

“We are going to court and file a claim for damages against the McCann couple, of that there are no doubts whatsoever”, stated yesterday to DN the former Judiciary Police Inspector Gonçalo Amaral after the Lisbon Court of Appeals ruling annulled the prohibition to market the book 'Maddie, The Truth of The Lie'.

“We haven't yet determined the losses”, added Gonçalo Amaral.

“The book is an exercise of Citizenship and of Freedom of Expression. With this decision made by the Appeals Court, it was the Portuguese democracy who has won, since the ban on the sale of the book was unconstitutional”, said Gonçalo Amaral. (Joana Morais)