Jaycee Lee Dugard: All The News, All The Time!! 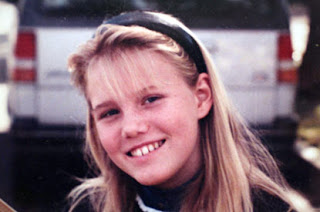 If you search on Google News for Jaycee Lee Dugard, you will see that every few minutes, there are several more articles about this sad case. Most are a rehash of what they told us yesterday and the day before.

A site called "The Moderate Voice," quotes the LA Times as saying that some media are so desperate for news items, they are offering cash for quotes.

At week’s end, the Antioch street where Jaycee Lee Dugard lived after she was allegedly kidnapped as a child 18 years ago by Phillip and Nancy Garrido was swarming with media. Satellite trucks parked in driveways, and cameramen and photographers tromped on lawns and knocked on doors up and down Walnut Avenue.


In the days since, locals who knew the Garridos said they have repeatedly been approached by reporters — American and foreign, print and television — who have offered thousands of dollars for information and photographs of the Garridos, Dugard, now 29, and the two daughters she bore Phillip Garrido, ages 15 and 11.

The money can be tempting for some who live in an area pummeled by the foreclosure crisis and the sagging economy.
And isn’t the following something we all could have expected?

Manuel Garrido, who lives in nearby Brentwood in Northern California, at first spoke freely with reporters about his son’s past. But now he says he wants to be paid. “No more free information,” said Garrido, 88. “Other people are getting paid.”

The elder Garrido said he had received $2,000 from one news outlet for an exclusive interview. “From now on, it’s going to be more than $2,000,” he said. “You’re making big stories, and you are getting paid for it. Here I am suffering, so I should get some money out of it.”

Concord resident Marc Lister, who knew Phillip Garrido and had some of his promotional business materials, said he sold one of Garrido’s own business cards, featuring a photo of Dugard, to a media outlet for $10,000.

The latest news features a "bone fragment," found somewhere in the vicinity of Garrido's house. Well, digging in my garden, I quite often come across bone fragments, but I can be fairly certain that no one has been murdered in my house and that no human body has been buried in my garden, though it may be worth getting some of those fragments analysed. You never know. This could be my fortune!!

Many of the quotes we're seeing are coming from Carl Probyn, Jaycee Lee's step-father, who witnessed her abduction from the bus stop in 1991. Now, I don't recall what Mr Probyn's job is or recall having read about his education, but Mr Probyn seems to have picked up some jargon from the psychologists, or at least one term: bonding.

From this headline, with the phrase in quotes, you'd think that Jaycee had come from her 18 year virtual confinement with attachment theory vocabulary. However, it seems that this is a misquote from Carl Probyn, who tell us that Jaycee feels guilty about "bonding," with Garrido.

“She is very remorseful,” said her stepfather, Carl Probyn. “She feels really guilty for bonding with this man. There’s really a guilt trip here.”

And in the London Evening Standard, Mr Probyn tells us:

"He said last night that Ms Dugard has been having "the happiest time of her life" bonding with her mother, Terry, and half-sister Shayna, who is 19."

Oh yeh!?? She's "bonding," with them? No! They are trying to get to know each other. Human bonding is a process. It doesn't happen by arrangement or by design. We have the works of people like John Bowlby which describe the bonding process between mother and newborn baby and the success or failure of that original bonding that affects the child's life. Adults do not get together and "bond," like something out of an RD Laing encounter group from the 70s. They may form a bond of love and friendship through the process of getting to know, care about and trust each other, but I am quite sure that the family of Jaycee Lee Dugard is not all happily "bonding," in their secret accommodation.

As for Jaycee having, "the happiest time of her life," I doubt that very much.

Mr Probyn is quoted elsewhere as saying that he, "knows Jaycee very well." Actually, I don't think so. He may have known 11 year-old Jaycee, but by his own admission, he has not yet met the 29 year-old Jaycee, who is going to be a quite different person in many ways, not just because of her experiences in the interim, but because from age 11 to age 29, most people change quite dramatically.

Today, I read that Jaycee's daughters know nothing about the world outside of Antioch. Well, a good percentage of the secondary school kids I teach know nothing of the world outside of their little area of Birmingham or whatever city they call home. They may have busy Facebook web sites, and chatter endlessly on MSN Messenger, but try telling the kids in Birmingham that people in Warwick or Coventry don't necessarily do things the way they do, or that there is a different world out there, and they behave as if you've gone totally nuts!

My thoughts are with Jaycee and her family. I cannot imagine what it must be like to lose a child, for a child to just disappear and to turn up years later as an adult, with children of her own. Neither can I begin to imagine what it must be like for that adult person, suddenly catapulted from the life she has known for 18 years, back to a family she was dragged away from when she was a child.

Like probably millions of others, I confess that I would love to see a photo of what Jaycee looks like now, but I also hope the whereabouts of the family can be kept secret for a while longer, because once the world's media gets wind of where they are staying, there's gonna be the most awful scrum of photographers and journalists.

I guess one of the most important questions being asked is how Garrido came to be released from a 50 year sentence, after only 11 years. While I believe that people should be given the opportunity to show that they have changed, I feel very pessimistic about the capacity of violent rapists to have a change of mindset.

And lastly, I would just like to say to the Mirror newspaper reporters that the woman Garrido was sent to prison, in 1976, for violently raping is not his, "alleged victim." We use the word, "alleged," when someone has not been found guilty (or innocent) of a crime. Garrido was found guilty of the crime and sent to prison. Therefore the woman is his victim and not his, "alleged victim."