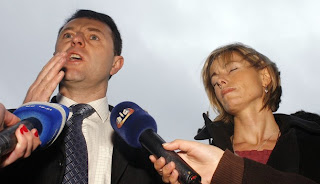 There are no names credited with the latest update on the Find Madeleine official web site. So, I assume that someone other than Kate or Gerry McCann has penned it. The spelling and grammar is a bit of a giveaway too: it seems quite correct on this occasion.

After telling us how shocked and upset they were about the files containing "gold dust," leads being kept secret, Kate and Gerry now sound like they're going into suing mode over those very files being released to the press.

"Events this week have yet again been incomprehensible and particularly upsetting."

Well, tell me, what do you mean by, "yet again."? What other events didn't you understand? I guess there was the dogs who found traces of blood and cadaver odour in your holiday apartment, on some of Kate's clothes, in your hired car and on Maddie's toy, Cuddlecat. You didn't understand how those traces got there, but at the same time as explaining how it could have come about, e.g., Kate handled 6 dead bodies just before going on holiday, and you carried rotting meat and filthy nappies in the hired car, you sought to convince us that the dogs were unreliable. I'm not sure that I understand that: Eddie dog did find cadaver odour but he's unreliable? What? Run that past me again.

What I find incomprehensible is how two doctors could leave three small children alone in an unlocked holiday apartment in a foreign country and reckon that checking them every half hour was adequate. Surely doctors would have some kind of notion about how quickly a child could choke, get out of bed and have any one of dozens of possible accidents in a domestic setting, wander out of an unlocked apartment?

"On Tuesday, the Public Prosecutor in Portugal released a large number of documents (relating to the investigation to find our daughter Madeleine) to the British Media, following their request for access. Disclosing such information publicly greatly jeopardises the search for Madeleine and puts witnesses and innocent members of the general public at risk (as well as causing them great anxiety). Release and publication of information in this manner also potentially compromises future investigations. It is difficult to see how anyone benefits from this week's actions."

How does the release of these files jeopardise the search for Madeleine? By giving a possibile abductor advance notice? How about those private defectives of yours then? They gave out details about the Victoria Beckhan looky-likey before they had checked out the details. They also alerted all those criminals in the "lawless villages," keepers of those "hellish lairs," that they were onto them.

This BBC video from August 6th 2008 shows a small child at a service station in the Algarve.

The presenter states that Kate and Gerry McCann only learned about this after the case was made public. No complaints about those images, then, but I guess that's because Kate and Gerry released them! I'm rather confused about this too, though. Were there sightings at two separate service stations soon after Maddie disappeared? The presenter on the video states that the child resembling Madeleine was seen "just hours after," she disappeared, but Kate and Gerry didn't know about it? Perhaps it's a different service station from that mentioned in Chapter 3 of Gonçalo Amaral's book, "The Truth of the Lie."

Madeleine's parents are already back in Vila da Luz when we receive photos taken in a service area of the motorway: you can make out the figure of a little girl, who looks like Madeleine, accompanied by a couple. These images come from a CCTV camera on the motorway linking Lagos to the Spanish border. The McCanns are asked to come to Portimão in order to proceed to an identification. It's the end of the day. Kate Healy seems annoyed at coming back and made uncomfortable by the speed of the police car taking her. We are somewhat astonished by her reaction, as if she was not expecting to get her daughter back. The identification turns out negative."

I guess there might have been lots of little blonde girls running around in service stations in the Algarve at that time. Or perhaps if this service station mentioned on the BBC video was indeed another service station, the Portuguese police assumed from Kate McCann's lack of enthusiasm for service station number one, that she'd rather stay home in the apartment, busy not searching for her daughter.

I fail to see how disclosing the information about the sightings could put "innocent members of the public," at risk. At risk of what? Snatching a small blonde child in a market in Outer Mongolia or a shop in Shepherds Bush and being prosecuted for attempted abduction? I think the McCanns' own actions have encouraged the snatching of children with the amazing range of photos of Maddie they released as well as the various and varied age-advanced images and their constant international appeals, some of which featured Maddie at age three, some time before the Praia da Luz holiday, thus leaving blonde and dark-haired children from age 3 to around age 12 vulnerable to being spotted as Madeleine McCann.

"It is difficult to see how anyone benefits from this week's actions."

Well, the McCanns would benefit, I reckon, from the fact that millions of tabloid readers will be convinced that a) Maddie really could be out there somewhere, and b) her parents are actually looking for her, rather than paying private detectives a loada dosh to stalk very ill paedophiles and issue yet more sketches to add to the wild assortment of suspects.

"We also urge each individual working for the media to consider their own personal responsibility - to put commercial interests aside occasionally and to bear in mind the potential consequences of their actions, especially when people's lives and well-being are at risk."

"His life has been “shattered”. He wanted to help, he alleges, but ended up as an arguido. Now he tries to find a direction. But that night in 2007 continues to persecute him."

So, let's talk about "personal responsibility," and the need to "bear in mind the potential consequences," of actions. Interviewed by Vanity Fair, Gerry was asked about Maddie's distinctive eye feature, a coloboma.

So, Gerry did actually consider the consequences of that action, but went ahead anyway, because it was a good marekting ploy? Pot, kettle, black comes to mind.

"Our own investigators have acted professionally and with complete integrity."

How I wish Blogger had one of those rolling around the floor laughing thingies! Which private investigators are the McCanns referring to?

Metodo 3 who knew who had abducted Maddie, where she was being held, and they were going to have her home by Christmas? Metodo 3 who released images of a small blonde Moroccan child being carried by her mother? Metodo 3 whose lead investigator was charged with theft of cocaine?

Or could it be Oakley International whose boss man is currently on remand charged with fraud and money laundering?

Maybe it's the current pair of duds, sitting in their office in Knutsford, Cheshire, giving out details about a Victoria Beckham look-a-like in Barcelona before they had checked out the details? Edgar and Cowley who mounted a massive surveillance operation, following a cleaner, a teacher and his wife, and found them very suspicious because they found a rag doll, a child's drawing and discovered the teacher shopping for children's clothes? Perhaps the McCanns should consider the consequences of releasing photos of these three people as well as images of the house where the teacher lives?

And finally, while the McCanns are expressing concern about the affects on the search for Maddie brought about by the release of these files, I note the absence of any concern for the children whose images have been plastered all over the media. The New Zealand police have asked for all images of the little girl in the Dunedin shop to be removed, but what about the Canadian child? Shouldn't the McCanns be concerned about her?

I would suggest that what they are actually concerned about is their own image. After reading the McCanns' complaints about the "secret files," which they considered to be, "gold dust," the public can now see how ridiculous many of these reported sightings are: the half-naked Frenchman, holding a gun to a child's head on a French motorway; the two women (the cleaner and the teacher's wife) seen with a gaunt-looking child wearing a black wig etc etc.

The Madeleine McCann case must be reopened if the McCanns want all these leads to be investigated. They must also bear in mind the consequences of their own actions and go back and take part in an official reconstruction of the events surrounding their daughter's disappearance. Kate McCann was aware that not answering those 48 questions could hinder the investigation. She can now do the right thing and go back and answer them when the investigation is reopened.