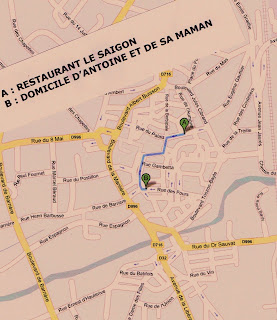 The former boss of the RG wrote a little black book about Sarkozy, who himself, sent his investigators to investigate the investigators who were investigating Besancenot (Presidential candidate in 2007 election.)
The Bourse plays yo-yo , the traders tie themselves in knots, they whistle the Marseillaise...Ah yes! There is no news of little Antoine.

a) On a May evening in 2007, the national director of the PJ receives a call on his mobile phone: "A child has disappeared..." From the next day, important people from the world of politics and the judiciary are on the spot, followed by a pack of journalists from all over the world. The case becomes Number One for the press, in Europe, in the United States...Before the cameras, the mother makes a plea, "to those who have done this." Specialists from Scotland Yard come to help the local investigators. In total, 150 police officers are mobilised. Two days later, the PJ director officially announces to the media: "It is an abduction". A support fund is set up on the internet and rich business men rush to the aid of the family.

That was in Portugal. Madeleine McCann, little Maddie, who disappeared on Thursday May 3rd 2007, at around 10pm, while her parents were dining with friends.

b) At practically the same time, that Thursday, September 11th 2008, Alexandrine Brugerolle de Fraissinette called the gendarmerie. "My son has disappeared", she told them. But hey! Alexandrine is 23 years old, she doesn't have much education, she is a lone parent and she works as a waitress at a restaurant in Issoire, a town of 13,000 inhabitants in Puy-de-Dôme. I am afraid the PJ's national director's phone stayed quiet that evening. At the end of the following day, in the absence of any elected official, any government representative, 80 officers of the gendarmerie (La Montagne) set out to help their colleagues in their search.

The facts: Alexandrine and Sébastien, her lover, decided to go out to a restaurant for dinner. It is not known whether it was Antoine who requested it (He is only 6 and a half, but he already displays a certain character.) or if it was a punishment, but the child stayed at home, with the two dogs. The apartment where he lives with his mother is in the Issoire town centre, at 1 Rue Des Fours. The restaurant, The Saigon, where Alexandrine and Sébastien have dinner, is at 45 Rue du Palais, three minutes walk away.

When his mother comes back, at around 9.30pm, Antoine isn't there. No mess, no evidence of intrusion.

The investigators think runaway. Then it is said that the child allegedly left the house carrying a little backpack and a packet of biscuits. And the Clermont-Ferrand proscutor of the Republic, Jean-Yves Coquillat, doesn't put the abduction-alert plan into operation.

There is something unvarying in disappearances of children or adults: it is that at the beginning, there is always a refusal to envisage the worst. This is true for the family and it is true for the investigators. Thus, searches start slowly and it is only in the early hours of the morning that things start to become serious. The police coordinate their efforts. They criss-cross the town. Others comb the outskirts of Issoire...They call in the dogs who, "mark," an area of ponds. They bring in a team of divers. They even bring in a helicopter equipped with a thermal camera, but given the weather, it will only be operational on the Sunday afternoon. During this time, some men go down into the Issoire sewers. Meanwhile, another team is engaged in a classic criminal investigation: looking for evidence in the home, interviewing witnesses, searches...

The investigation: Finally, three days after the child's disappearance, the prosecutor decides on the opening of a criminal investigation for the abduction and illegal confinement of a minor under the age of 15. He states: "The more time goes by, the more the idea of a runaway loses credibility and I am not very optimistic." Soon, the press takes up the suspicions weighing on Antoine's mother, and adds: "the red-haired woman...the seductress....the lone mother...., she created a prison..." The descriptions are of the same ilk for Sébastien: druggie...., violent...., he beats Antoine up..." So much gossip amplified by the prosecutor's innuendo.

On Wednesday September 24th, Alexandrine, her partner and six of their acquaintances are taken into custody. The apartment is again taken over by forensic technicians. They sound the walls, the parquet tiles are lifted, places are gone over with a fluorescent light. All that is found is two small drops of blood, tiny, near the switch, in Antoine's bedroom.

Finally, everyone is released, except Sébastien, who is imprisoned for something else. One of the leading investigators confesses: "We need to go back to the beginning..."

The reconstruction (subject to change): One month before the tragedy, Alexandrine was working as a waitress at the Au Bon Croûton restaurant, owned by Stéphane Bourcelin. They had an affair when she was hired in 2006. It was she who broke it off and contrary to gossip, there are no other known liaisons, until her meeting Sébastien in July 2008, at the time when Antoine is on holiday with his great-grandmother.

In the restaurant business, the 35 hour week is unknown. She works hard. Long days, sometimes without a day off in the week. Towards mid-August, she breaks down and her doctor tells her to take time off work. Stéphane does not appreciate this, especially as he can no longer see Antoine, because he seems to have taken a liking to this little kid. He often played with him, or they watched videos together. He even offered him a Playstation. And suddenly, he is deprived of Antoine and of his....waitress, because Alexandrine and Sébastien have other projects. They want to get married, start a real family. Sébastien even envisages "adopting" Antoine.

Things seem to be sorting themselves out for Alexandrine and her son. Perhaps the end of hardship..Until that famous evening. Today, we can reconstruct the events with far less risk of error than at the beginning. First of all the rumours, according to which no one allegedly saw the child for around a fortnight, are without foundation. In fact, two days after Antoine's disappearance, the gendarmes recorded the statement of a witness who stated having seen him, at his home, coming out of the bathroom.

On September 11th, a neighbour heard the child playing in the apartment, at around 7.15pm. His bedroom light was on. Later in the evening, her attention was drawn to a car stopping at the foot of the building. Then there were footsteps on the stairs. A little later, the car took off at a cracking speed.

Antoine did not leave with a small bag and a packet of biscuits as has been said, but with a large bag belonging to Sébastien. A black (or navy blue) bag nearly as tall as himself, in which clothes must have been packed, clothes where were not found in his wardrobe. His soft toy, a little cat, which was always dragged around with him, also disappeared.

So, what happened on the evening of Thursday September 11th? Did Antoine's mother chop her child into small pieces, which she then crammed into bin bags, as hinted at by a newspaper, which I will not even name?

Or taking advantage of the child's being alone, someone came to find him? And with what intentions?

The president of the Esperanza Association (blog about Antoine's disappearance) Madame Lydie Fontenil, wants to hold onto this possibility. "There is really nothing new," she told me on the telephone, "but little clues allow us to maintain hope." We should listen to what she says, because she is a woman of experience. For years she has devoted herself to searching for missing children. And she knows that sometimes it ends well. When Antoine disappeared, with his mother's agreement, she set up a blog devoted to him. She responds to numerous telephone calls, she puts pressure on "her" volunteers (she is looking for new ones) she shakes up her information network, she supports Alexandrine etc. "I have lost six kilos," she smilingly confessed to me.

A few days ago, in the little station, in the area of Paris where I take the RER, there was a missing person poster. It was about a fifteen year-old teenager who lives in Nantes. I don't know about you, but in the Paris area, I have never seen a poster about Antoine.

That is why I wanted to write these lines. I know this is only a blog...

It is said that women are more sensitive than men, above all as soon as we are talking about children...The two ministers directly responsible for this investigation are women. Are they at least aware? In any case, no one has heard from them.

When a couple of tourists were kidnapped by pirates off the coast of Djibouti, the President of the Republic took things in hand. This same president, when he was Minister for the Interior, had moved heaven and earth to find little Estelle Mouzin.*

A little six and a half year old boy has been missing for 38 days - and the silence of those people, those who hold power, is deafening.

*See previous posts on this blog.