McCann case: Brian Kennedy and Metodo3 meet with the PJ

On October 19th 2007, Alberto Carbas, head of the Anti-Abduction Unit of the Spanish Department of Criminal Investigation, contacted the PJ and asked the inspectors in charge of the investigation into Madeleine's disappearance if they were willing to have a meeting with a representative of Metodo3 and an officer belonging to the Spanish unit.

The purpose of this meeting was to provide the PJ with information held by the detectives. The Spanish police officer stated that Metodo3 had no intention of interfering with the work of the Portuguese police, but only to pass on useful information. At the same meeting. Metodo3 stated that they were not working for the McCanns but for Brian Kennedy.

On November 13th 2007, the meeting took place, in Portimao. Taking part in the meeting were two PJ detectives - Ricardo Paiva and Paulo Ferreira - the director of Metodo3, Francisco Marco, a detective and advisor for the agency, Antonio Jiminez (former head of the Catalogne police Anti-Abduction unit who, later, was arrested in Spain accused of trafficking cocaine) and the millionaire Brian Kennedy.

The two PJ inspectors submitted an account of the meeting containing information exchanged and investigations concerning the leads given by Metodo3.

The report, which is amongst the documents contained on the DVD, indicates that right at the start of the meeting, Brian Kennedy was keen to stress that his intentions were purely charitable, because he felt concerned about cases of child neglect and child abduction. He stated that his concern, in this particular case, was only the truth and nothing but the truth, independently of knowing if the McCanns, their friends or any other person was involved or suspected.

The man hidden in the shadows.

The director of Metodo3 presented a report to the PJ about three situations, connected with Madeleine's disappearance, allegedly received via their hotline. The first concerned an incident that the British media had already referred to, at the end of October 2007: a woman who was babysitting at the Ocean Club, in apartment 5A in August/September 2006, spotted a man, "hidden in the shadows," one Thursday - the same day of the week that Madeleine, aged 4, disappeared," as The Sun wrote on October 31.

According to the newspaper, "the nanny - identified only as M.H. - reported the frightening incident to the police in England after the hunt for Madeleine started in May, but did not speak to the police in Portugal." Clarence Mitchell added that: "This evidence supports what we have always said, that Maddie was taken from her bed by an abductor."

The PJ ruled out this report, because the detectives considered that there was no proof that it was related to Madeleine's disappearance.

The second piece of information was about the alleged existence of a paedophile image on a computer at the home of Sergei Malinka, witnessed by the fiancé of a British woman, four years ago, when he was at Malinka's house. According to this witness, he questioned Malinka on the subject and he explained that the computer belonged to a client and that he would report it later to the authorities.

All of the computers at Malinka's house were seized and examined, but nothing of any relevance or suspicion was found, the PJ report indicates.

The third piece of information referred to a detailed witness statement, according to the Metodo 3 report, about a woman handing what the witness was convinced was a child, wrapped in a blanket or a sheet, over a fence to a man, next to two parked vehicles, near a town 160 kilometres from the Algarve. The witness, a Portuguese lorry driver, M.G., looked at several photos and picked out Michaela Walczuch, saying that was the one that most resembled the woman he had seen.

The English media also published the story on November 19th 2007, but with different details. "A witness spotted Murat's German girlfriend, Michaela Walczuch, in a car with Maddie, on May 5th, in central Portugal," the Metro wrote. On the same day, the Daily Mail published a similar story: "According to a source, a new witness identified Michaela Walczuch as the woman seen with the missing child, in central Portugal, 160 kilometres from where she disappeared on May 3rd."

As usual, Clarence Mitchell had a few things to say to the media: "We are not going to comment on any line of the investigation except to say that we are encouraged by the fact that our investigators seem to be making progress. Kate and Gerry are not ruling out any possibility."

The Pj studied this incident and questioned the Portuguese lorry driver, but the facts that he described to the police were somewhat different: he saw a woman handing something to a man, over a fence, wrapped in what looked like a blanket. It wasn't heavy, because they did it easily and the fence was around a metre sixty high. Asked if it could have been the body of a child, he responded that nothing he had seen would indicate that.

Questioned also about the positive identification of Michaela Walczuch, according to Metodo 3's report, the witness told the PJ that he couldn't see the woman's face, because he was driving his lorry at 70/80 km/hour, and the couple were at some distance. He only chose Michaela's photo from amongst the others Metodo 3 had shown him because she had the same hair colour similar build.

Madeleine McCann: The truth and nothing but the truth. 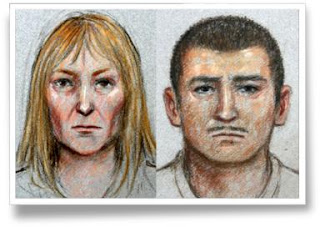 The press, or rather a certain press, whether from one country or another, are distorting, inventing and misinforming the public. With the only concern being to increase their circulation, certain media are inventing more incredible stories, some more than others. And we are not only talking about the tabloid, "The Sun," of which most people don't believe a single word. The press played with publishing images published thousands of times last year, claiming that these were new trails not followed up by the PJ. All of that is false.

All of these trails are nothing new and they were checked by the PJ as they should be. A simple example amongst all others, apart from all the crazy stories about Belgium, is the story of the couple who were allegedly seen with Madeleine three days after her disappearance. A drawing (above), published in the, "Mirror," was done by an artist based on the statement of a witness: Anna Stam. But, this trail was indeed checked. The results of the investigations are on page 191 of the case file. The famous couple were identified, questioned, and finally ruled out. The press knows it. It's in the report! I can understand that it is how this type of newspaper makes its money, disclosing false information, since this information is sensational. I imagine that if they all continue to publish any at all it is because they have a public who enjoy it. This association is not judging their readers.

But we can ask questions here about the parents' reaction and that of their spokesperson. We don't understand why they participate in this farce! The witness was invited to the UK to meet the McCann parents and Clarence Mitchell. The portrait was published on the parents' web site. A telephone number is even given. However, Clarence Mitchell, the McCann parents and their lawyers all have a copy of the case file. As a consequence, they all know that these people have been identified and questioned! There is the feeling of acting in a great stage play. A bad play.

We don't need to lay into the British press! That would be too easy and not a little biased. The Portuguese press is not exempt from sensational articles. Thus we can read in some parts of the press that Kate's personal diary is a fake according to the investigators in charge of the case. A fake meant to influence the investigation. In reality, the truth is slightly different. I have already explained to you in a previous article that the personal diary of a suspect has little value in the eyes of the police, knowing, precisely, that this diary could serve to influence the investigation or divert suspicion. This is why police all over the world, don't take it into account. Even if the personal diary is seized, it is only for information, in the event that a detail could be found, but under no circumstances as a piece of evidence. The Portuguese jumped to a conclusion a little too quickly. It's not the first time either.

What does that say? That everybody lies? Of course not. There are journalists, journalists and media who work conscientiously. It needs to be realised that the Portuguese Public Prosecutor handed over 11,000 out of 30,000 pages of the case file to the press. That means that there are still 19,000 pages which are still covered by the secrecy of justice. Clearly, this means that the press has no more information now than before. Everything in those pages has already been disclosed and published over more than a year now. In these pages, there is nothing new! Nothing that hasn't been talked about already. The important issues of the case are in the remaining 19,000 pages!

For our part, we have decided to present all the details of the case file to you. Thus over the next few articles, we are going to present the comments from the police, the questioning of the witnesses and suspects, the facts, the places, the times, the dates etc etc. Everything that's in the case file, without adding or taking out the least comma, so that the contents are in one sense or another, wholly transparent, so that you will no longer be manipulated by anyone, and you can form an opinion based on the real details contained in the case file. We will publish it for you and we will add each time a photocopy from the case file to corroborate what we write. We will add, where necessary, a commentary clarifying the police approach and various aspects of the case file. And to begin with, in every police report, there is a document which the police must have already asked you for on different occasions: your identity card and/or your passport. So, we start with the identity card of the missing victim: Madeleine Beth McCann.