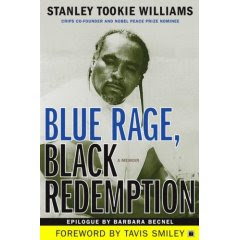 "SAN QUENTIN, California (CNN) -- Death did not come quickly for Stanley Tookie Williams, the co-founder of the violent Crips street gang who was executed by lethal injection early Tuesday for the 1979 robbery murders of four people in Los Angeles.

Witnesses and prison officials said Williams appeared to grow impatient as prison staffers searched for several minutes for a vein in his muscular left arm.

They said inserting the IVs to administer the lethal chemicals took nearly 20 minutes, with staff having particular difficulty getting a needle into Williams' left arm."

"The execution went ahead as scheduled after the U.S. Supreme Court late Monday rejected a last-ditch appeal.

So, who was Stan Tookie Williams? He was born in New Orleans on December 29th 1953 and became one of the early leaders of the notrious Crips gang in South Central Los in 1971. In 1981, Stan was convicted on four counts of murder and sentenced to death. He spent six and a half years in solitary confinement for assaults on prison staff and fellow inmates. Stan had led a very violent existence as a founder of the Crips, and his violent behaviour continued in prison.

After being released from solitary confinement, Stan's behaviour changed dramatically. He wrote several children's books advocating non-violence and an alternative to gangs. He wrote several books about his life, including an autobiography, "Blue Rage, Black Redemption." Holywood honoured Stan in 2004 with a film about his life, "Redemption: The Stan Tookie Williams Story."

Stan maintained his innocence of the murders throughout his time on death row. Numerous appeals were posted and all were unsuccessful. The final avenue open to Stan was an appeal for clemency to the Governor of California, Arnold Schwarzenegger, who turned it down.

"Thousands of people signed online petitions calling for Schwarzenegger to commute the death sentence. Those who campaigned against the execution included celebrities, politicians, and Nobel laureates."

"In 1997, Williams wrote and posted on his website an apology for his role in creating the Crips. In 2004, he helped broker a peace agreement, called the Tookie Protocol For Peace, for what had been one of the deadliest and most infamous gang wars in the country, between the Bloods and the Crips, in both the state of California and the city of Newark, New Jersey. On the nomination of William A. Harrison, a minister from West Monroe, Louisiana, Williams received a letter from U.S. President George W. Bush commending him for his social activism, one of some 267,000 "Call To Service Awards" that were sent out."

Stan Tookie Williams was nominated for the Nobel Peace Prize for his books which were intended to help disenfranchised youth.

The death penalty process does not seem to have space for nor embrace the possibility of redemption, that a person can be truly remorseful and, as in Stan's case, make very valuable contributions to society. Whatever his guilt or innocence in the four murders for which he had been convicted and sent to San Quentin, Stan Tookie Williams redeemed himself in his work for peace and reconciliation. It was a sad day when Governor Arnold Schwarzenegger turned down the appeal for clemency. This decision led Arnold Schwarzenegger's home town in Austria to rename a sports stadium which had been named in Schwarzenegger's honour, so strong was the world-wide support for Stan.

Stan Tookie Williams is gone, but definitely not forgotten. A reprint of his autobiography, "Blue Rage, Black Redemption," has been published in November this year and hopefully many more people, especially the young and disadvantaged in American inner-cities, will hear the Tookie message of non-violence and alternatives to the gang culture.

Stan Tookie Wiliams, I salute you and honour you as a true example of the redemptive power of the human spirit. Rest in peace Tookie.

Posted by AnnaEsse at 19:05 No comments: