Anjem Choudary: When we say 'innocent people,' we mean Muslims 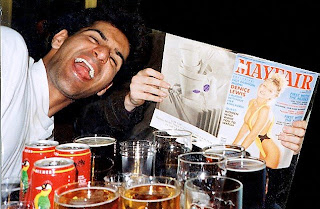 Anjem, aka Andy Choudary, knocking back the cheap cider.

"One former friend said: 'I can't keep a straight face when I see "fundamentalist Muslim Anjem Choudary" in the papers attacking the British for drinking or having girlfriends.

'When I knew him, he liked to be called Andy, would often smoke cannabis spliffs all day, and was proud of his ability to down a pint of cider in a couple of seconds." ( Daily Mail)

"And he was ruthless with girls. When he briefly worked as an English teacher for foreign students in London, he'd pull one of them every few days, sleep with her, then move on to another.

'If Sharia law was introduced, he would have been whipped and stoned to death many times over.'

Choudary, who was born in South-East London to a market stall-holder of Pakistani descent, has become one of the faces of extremist Islam."

And Choudary now! "Anyone who becomes intoxicated by alcohol would be given 40 lashes in public." I guess you wouldn't want to make that retrospective, Mr Choudary! 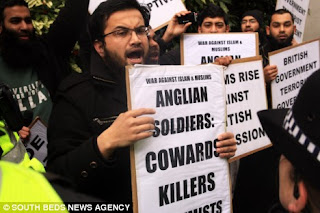 Above: Anjem Choudary leading the hateful protest that insulted UK troops parading through the streets of Luton.

Anjem Choudary being interviewed in January 2007 about the 7/7 bombings. He said, "When we say 'innocent people,' we mean Muslims. As far as non-Muslims are concerned, they have not accepted Islam and as far as we are concerned, that is a crime against God."

So, remember, folks, when a Muslim says they would never kill innocent civilians, they mean Muslims. They don't mean the rest of us because by their definition we are not innocent, because we have not accepted Islam. Forked tongue?

And here, below, is Mr Choudary's religion of peace, his fellow Muslims getting worked up and aggressive after a police officer asks to speak to someone who is chanting hatred from a megaphone in a moving vehicle. The police are there to keep order on our streets. They have every right to ask someone to be quiet, when that person appears to be inciting a riot, as the person in the vehicle appeared to be doing. Yet, there on our streets, a Muslim horde cornered a group of police officers, with shouts of, "How dare you." How dare they? They are doing their job, keeping law and order, preventing a breach of the peace, which they have every right to do, a right which is given to them under the law of our land.

UK Muslims outside London's Westminster (Catholic) Cathedral, shouting hatred, shouting threats against Pope Benedict, saying those who insulted Islam should be subject to capital punishment, and there is Anjem Choudary on the megaphone yet again. July 2007. In the interview, which is included in this video, Choudary is asked if he doesn't believe in democracy. His answer, "No, I don't at all. I believe we must live according to the Sharia." Yet, Choudary and his fellow preachers of hate seem to be forgetting that they only have the right to say those things because they are living in a democracy.


Isn't it time to say enough is enough. The Australian Prime Minister was brave enough to tell Muslims that they were living in a country based on the Christian faith and on democracy and if the Muslims didn't like that, if they couldn't accept the ways of the country, they should take advantage of that other great freedom afforded by Australian democracy, the freedom to leave and find a country that better suited their expectations. Let's get these preachers of hate and violence off our streets. It's high time our government took a firm stand and imposed the law on people who incite hatred and violence. Clean our streets of this vile horde. We've had enough.
Posted by AnnaEsse at 15:08