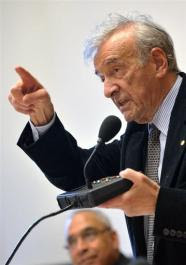 Elie Wiesel (pictured right) is the author of more than forty books of fiction and non-fiction, including A Beggar in Jerusalem (Prix Médicis winner), The Testament (Prix Livre Inter winner), The Fifth Son (winner of the Grand Prize in Literature from the City of Paris), and two volumes of his memoirs.

For his literary and human rights activities, he has received numerous awards including the Presidential Medal of Freedom, the U.S. Congressional Gold Medal and the Medal of Liberty Award, and the rank of Grand-Croix in the French Legion of Honor. In 1986, Elie Wiesel won the Nobel Prize for Peace, and soon after, Marion and Elie Wiesel established The Elie Wiesel Foundation for Humanity.

Kaleidoscopic irony from the UN’s Jew-bash bash in Geneva, as the world’s most famous Holocaust survivor suffers the indignity of analogy to the people who murdered his family courtesy of the world’s most famous Holocaust denier and his screeching goons — on Hitler’s birthday. I think that’s Ahmadinejad with the keffiyeh around his neck; the two pass within five feet or so of each other at one point. Don’t try parsing the logic: Why Iranians would consider “Nazi” an epithet, especially given Dinner Jacket’s revisionism on genocide, isn’t clear.

An interesting footnote: He actually dropped a line about Holocaust denial from his speech at the last minute under intense pressure from the UN amid the prospect of even more walkouts from western countries. It’s hugely gratifying to see this turn into the PR clusterfark for them that it deserves to be. And no worries — it won’t stop The One from meeting with Khamenei and posing for a stooge-ish grinning handshake photo of his very own. Exit quotation from Wiesel: “Here we are now in the United Nations, an organisation created as a response to the atrocities of the Second World War and we have to protest against anti-Semitic speech.”

GENEVA (AFP) — Nobel laureate and Holocaust survivor Elie Wiesel said Tuesday it was an "insult" to have allowed Iran's president to launch a verbal assault on Israel at a UN anti-racism conference.

The presence of Mahmoud Ahmadinejad and his speech was "an insult to our intelligence," Wiesel said at an event on the sidelines of the conference, one day after the Iranian leader called Israel "cruel" and "racist".

"Here we are now in the United Nations, an organisation created as a response to the atrocities of the Second World War and we have to protest against anti-Semitic speech," Wiesel said.

"Why this member is invited to the UN is beyond me. Why he was allowed to say what he said, why wasn't he stopped by the chairman... is beyond me," the American writer said.

Ahmadinejad sparked a walkout by European delegates at the conference Monday when he criticised the creation of a "totally racist government in occupied Palestine" in 1948 and calling it "the most cruel and repressive racist regime."

Ahmadinejad was scheduled to speak for seven minutes at the Durban Review Conference, but his speech lasted approximately half an hour.

How come Amadinnerjacket was allowed to carry on with his hate speech for a full half-hour? How come no one called a halt to his anti-Semitic rant? That was a United Nations conference on racism for goodness sake and that slimy toad, hate-filled preacher of jihad, the one who wants Israel wiped off the map, was not only the Swiss government's guest of honour at the conference, he was allowed to just carry on regardless after 23 people walked out. He isn't fit to lick the boots of the Nobel laureate Wiesel, though I think Wiesel would probably want to burn his boots if that poisonous toad touched them.

It's time for people of the civilised world to take a stand on this. In Elie Wiesel's own words:

"I swore never to be silent whenever and wherever human beings endure suffering and humiliation. We must always take sides. Neutrality helps the oppressor, never the victim. Silence encourages the tormentor, never the tormented."
Posted by AnnaEsse at 20:54