Madeleine McCann: Maddie's parents did a show to cover up their lying. 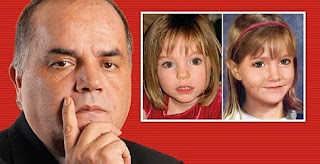 The police officer responsible for the investigation into the disappearance of the little girl is adamant: Maddie is dead and, in spite of their apparently being at a loss, her parents are involved. In an explosive book, "L’enquête interdite," he relates how, because of political pressure, he was prevented from proving it.

The investigation of his life. It occupied Gonçalo Amaral day and night, between May 3rd 2007 at 10pm and October 2nd 2008, the date of his leaving for his early retirement: the Madeleine Maddie Beth McCann case. A little three year-old English girl, who disappeared from the holiday apartment in Vila da Luz, in the Algarve, while her parents were having dinner in a tourist complex restaurant, a few dozen metres away.

Amaral is now 50 years old. A workman's son, fifth in a line of six children, himself father of two little girls aged 4 and 9 years. He had to leave the role of inspector, he says, because, "in Portugal or elsewhere, the politicising of the police hampers their work and prevents justice being done. As in the Maddie case, more and more investigations are stifled or archived before completion." He is now a television legal consultant, columnist for a major Portuguese daily and teacher of criminology.

Gerry and Kate McCann, Maddie's parents, both doctors, transformed the disappearance of their daughter two years ago into a global drama. From David Beckham to Cristiano Ronaldo by way of Pope Benedict XVI, they orchestrated a huge operation and created a support fund which reached 6 million francs in three days.

Gonçalo Amaral was thrown off the investigation, that the Lusitanian police officially archived on July 21st 2008. But Amaral found freedom: to relate his version, his conviction. His cop's story.

What details led you to accuse Maddie's parents, with so much conviction, of lying to the whole world?

There were lots. First of all, like those of their friends, their witness statements and their testimonies reveal a great many inaccuracies, inconsistencies and contradictions. Then there was the cadaver odour confirmed by the sniffer dogs and the existence of traces of blood behind the sofa in the apartment confirmed by the preliminary analyses. It could be suggested that the little girl fell behind that piece of furniture, perhaps because of sedatives her parents gave her regularly, as they have elsewhere acknowledged. Also note the odours and traces of blood in the car hired by the McCanns three weeks after Madeleine's disappearance. The only one of the eleven cars checked that drew the attention of the dogs. There is also the witness statement of an Irish couple who state that they saw Gerry McCann with a child in his arms on the evening of the events.
Finally there is Kate McCann's fingerprint on Madeleine's bedroom window which indicates clearly that she opened that window, without doubt to make the theory of abduction believable, although she has stated that the window was already open when she arrived on the premises at 10pm, the time at which she observed Madeleine's disappearance and raised the alarm.

That's your truth, that's not supported by any evidence...

It's not my truth. It's the conclusions of a four month investigation led by over a hundred police officers and specialists. Concerning the facts, the results indicate that the samples analysed are a 75% match to Madeleine's DNA.

Why does all this evidence not constitute sufficient proof?

Because the results required further confirmation and we had to get on with other investigations on the basis of these details. Definitely the latest. It could be perfectly imagined, for example, that Maddie had been concealed in a freezer between May 3rdamid May 27th . All of that had to be meticulously checked. Unfortunately, it was at that moment that the wish to archive the case appeared and I was thrown out. That the case was really hindered.

By whom and why?

In your book, you go as far as suggesting that English support for the Treaty of Lisbon was subject to the archiving of the case?

I didn't say that. I simply said that rumours to that effect were going round.

"I'm still waiting for the McCanns to take legal action."
Those are serious accusations and you will carry a huge responsibility if, by chance, the parents theory checks out....

It won't check out. Maddie is dead, her parents know it. Their behaviour shows it. After having set up the kidnapping, right away they gave out the abduction theory to the media without accepting any other hypothesis. On that point, do you know many parents who, while their child has allegedly been abducted, engage a PR chief before a lawyer? I also recall a statement Kate McCann gave to the press, a few days after the drama: "Two years later, we are still looking for Maddie." How could she appear to be so adamant? Finally, why did they leave Portugal so soon after having been placed under investigation while the searches they financed with the fund were ongoing?

Why did they lie and so cynically make up evidence?

Because they made a mistake in leaving their children alone and they were completely swept along by the enthusiasm of the media which they themselves provoked. Having said that, the simulation of abduction is something usual in this kind of case. Statistics prove it. Since 1960 up to the present, in England - but it's similar in most western countries - , 1528 child murders were recorded. Eighty-four percent of those were done by parents and 96% if you widen it to relatives. In the vast majority of cases, the parents invent a kidnapping story.

The McCanns spokesman, has he brought up the idea of legal action against you?

I have been waiting impatiently for it since my book came out in Portugal, a year ago. It would allow the reopening of the investigation and me and them to explain ourselves clearly before a court. But Maddie's parents obviously have no wish for the truth to come out.

They accuse you of wanting to make money off the back of their daughter...

The argument is easy and shows that they don't have many others. It's not serious. I wrote the book so that public opinion would be able to learn about the behind the scenes details of this case and their conclusions. I was forced to give up, but I wanted to defend the truth and the values I held throughout my twenty-seven years with the police. Now, the Maddie case is archived and her parents have no wish for it to be reopened. Personally, I acted as my conscience required of me. My mission is complete.

Link to the Amaral documentary

Anonymous, thank you. The link doesn't seem to be working. Have you got another?

I feel you are either trying to cover up your inept investigation and police force in Portugal that had NO CLUE how to handle abductions, or you are somehow involved. Hasn't anyone heard of organized crime???

Now you're making money off of the abduction of a missing innocent girl.
You are a discgrace!

Second anonymous, I think you're in the wrong place. I am not in any way connected to Portugal or the Portuguese police. Please take thee hence and stop bothering me, you crazy troll.

Actually, anonymous, it is not a forum for general comments. It's a blog that invites comments. And if you leave a potentially rude comment on my blog, I will respond in kind.

I see.. the forum invites comments that only agree with your opinion.. This is how you attempt to shape public opinion in the expense of an innocent child...

Why have you not posted my other comments that are based on facts? Including the one asking Goncalo why the Portuguese authorities have not done or allowed a search of the tunnels under the church and Estrela Da Luz apartments, even after numerous requests?

I bet you will not post this one either. I hope you can sleep well at night.

Anonymous, IT...IS...NOT...A...FORUM!! Is that clear? And I retain the right to publish whatever comments I choose. And I do sleep really well, thank you for you, um, concern?

There are plenty of other places to ask Sr Amaral why he did or did not do anything in particular. This is not the place as I am quite sure Sr Amaral does not read my blog.

Try the 3 Arguidos forum. I think Sr Amaral reads there.

AnnaEsse, It was not my intention to upset you and if I have, I am sorry.

I have been following the Madeleine case very closely for 2 yrs now and I can honestly say that it has deeply affected me.

I have 3 young children of my own.

I am aware of child abductions because I know a very reputable source in the Center for Missing Children. Over 900 children, all of them missing over 2 yrs, have been recovered with age enhanced photos like the recent one of Madeleine. It can happen. She can be found.

Anonymous, thank you. I think there are lots of people like you, kind-hearted people who want to think the best of parents and who just cannot believe that parents would harm their own children.

I really wish that Madeleine could be found alive, though, even if she were, I think she would be a damaged child, and she would not, after all this time, remember her parents or her brother and sister very well.

I think Madeleine is dead, though, and what I would like to see is her having a proper and decent burial, so that all those folks who have taken an interest in her plight, could go and pay their respects to a little child finally laid to rest.

PS: Many thanks for your good luck wishes.