Robert Murat to sue 4 of the Tapas friends of the McCanns. 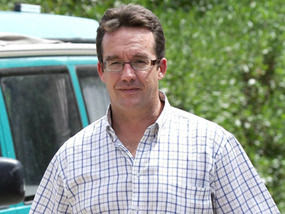 The Daily Express reports that Robert Murat, the first person to be named as an arguido, or official suspect, in the Madeleine McCann case, is to sue four of the 7 people the McCanns went on holiday with in May 2007.

"The estate agent has lodged a “criminal complaint” against Jane Tanner, 39, who claimed she saw a man carrying a child near the McCanns’ holiday apartment on the night Madeleine vanished.

A second complaint has been made against Ms Tanner’s partner, Dr Russell O’Brien, and Fiona Payne and Rachael Oldfield, also members of the so-called Tapas Seven.

It is understood that the complaints centre on allegations that the four gave evidence to Portuguese police which led to them making Mr Murat, 35, a suspect in the investigation.

The expat, who lived in Praia da Luz at the time, was found to have no involvement in Madeleine’s disappearance.

Details of the allegations, lodged at a court in Lagos in the Algarve, are unclear because under Portuguese law the parties involved cannot discuss them."

A very thorough analysis of the changing nature of Jane Tanner's evidence and of how the other three came to "finger," Robert Murat was posted by Paulo Reis on the blog Madeleine McCann Disappearance on 23/04/09

One thing that is obvious from the CD of evidence released by the Portuguese authorities in July 2008, in what was an inexplicably selective disclosure, is the identification by Miss Jane Tanner of Mr Robert Murat as Madeleine McCann’s “abductor”. She picked him out in a surveillance exercise on Sunday 13th May 2007 and persisted in her allegation against him and did not withdraw it until her interviews with the Leicestershire Police in April 2008. You have to dig deep into the CD and other sources to pull everything together, but here is what happened and it is incredible." **

In her original statement to GNR police officer, Nelson da Costa (statements at folios 417, 1340 and 3285) in the early hours of May 4th 2007, Jane Tanner said she had seen "an individual," running, carrying a child, who was wearing pyjamas. When asked for a description of the individual, she replied that it was too dark to see him clearly. She was challenged about how she could then have noticed that the child was wearing pyjamas.

In her further statement, late morning of the same day, Ms Tanner, whose statement was translated by Sylvia Baptisa, an employee of the Ocean Club, was able to render a fairly detailed description of the individual she had seen.

"Brown male between 35 and 40, slim, around 1.70m. Very dark hair, thick, long at the neck. (Noticed when the person was seen from the back). He was wearing golden beige cloth trousers (linen type) with a "Duffy" type coat (but not very thick). He was wearing black shoes, of a conventional style and was walking quickly. He was carrying a sleeping child in his arms across his chest. By his manner, the man gave her the impression that he wasn't a tourist."

"Concerning the child, who seemed to be asleep, she only saw the legs. The child seemed to be bigger than a baby. It had no shoes on, was dressed in cotton light-coloured pyjamas (perhaps pink or white). It is uncertain, but the interviewee has the feeling that she saw a design on the pyjamas like flowers, but is not certain about it."

"Concerning these details, the interviewee states not having known what Madeleine was wearing when she disappeared. She has not spoken to anyone about this. Concerning the man, she has only mentioned it to Gerald, but without going into details and with the police."

The interviewee has been invited to draw a sketch which we attach to this document. Questioned, she stated probably being able to identify the person that she saw if she saw him in profile and at the place where she saw him." **

The drawing on the left is the first sketch, based on Jane Tanner's description of the alleged abductor. Even as it stands, it bears no relation to Robert Murat and neither does her original description.

On May 6th, a Leicestershire police officer faxed the incident room in Portugal with news that Lori Campbell, the Sky News journalist, had been in touch, raising suspicions about Robert Murat. Paulo Reis points out that the speed of relaying this information was in stark contrast to that with which the statements from the Drs Gasper were passed on: the Gaspers made their statements about David Payne in May 2007, but these were not forwarded to the PJ until months later.

After speaking to "some people that Kate and Gerry had brought in," (believed to be Control Risks Group, retained by Bell Pottinger as part of a "crisis management," team by Mark Warner), Jane Tanner was approached by Bob Small, a Leicestershire police officer, who was assisting the PJ in the Algarve. At this point, unlike her husband, Ms Tanner had not met Robert Murat. The scenario was set up for Jane to view Robert Murat walking across the top of the road, where she claimed to have seen the man carrying a child. On the way there, she was actually introduced to Robert Murat!

"Miss Tanner dramatizes that she was “worried sick” that the “Spanish Police”* were about to cart her off to destinations unknown and got her husband to walk with her to the rendezvous with Mr Small. If, as she claims, she did not discuss the identification operation with her husband, what precisely did she say to him? What did he think was going on? Who looked after their kids and what did they tell them? It is beyond belief that Russell O’Brien and some of the other “Tapasniks” did not know what was afoot." **

(* Jane Tanner stated that Bob Small told her the Spanish police wanted to speak to her and that she was terrified that she was going to be abducted.)

"Why the police arranged Miss Tanner’s pick up so near to their main suspect’s home was at best foolish and was asking for trouble. On their way to the car park - and just outside his home - Robert Murat (who had met Russell O' Brien on the morning of Friday 4th May 2007) stopped, got out of his green VW van and chatted, showing the couple posters he had made to “Find Madeleine” and generally rattling on about nothing in particular. This was the first time Miss Tanner had been introduced to Mr Murat, but given the events that were about to follow it is amazing she did not cry out “That’s him… that’s the ‘person’ I saw: the abductor”. But she didn’t say a single word." **

Subsequently, as we know, Ms Tanner sat in a van with tinted window, while Robert Murat walked across the top of the road, accompanied by two police officers, and she clearly identified Murat as the man she had seen carrying the child, although physically he bore no resemblance to her detailed description.

And here come the Tapas 3 to join her!

"A report on Sky News caused Rachel Mampilly to scamper into the Tanner’s apartment saying she recognised Mr Murat from her sighting of him at the Ocean Club on the night of 3rd May 2007. Fiona Payne corroborated this and Russell O’Brien added that he had met Mr Murat, while the search for Madeleine had been taking place on the night and early morning of 3rd and 4th May 2007, and had entered the interpreter’s telephone number into his mobile’s memory at that time." **

Elsewhere, Daily Mail 01/01/08, we read what was reported to have been said by the Tapas 3 about not only seeing Robert Murat on the night of May 3rd, but of speaking with him.

"Three friends of the McCanns, Rachael Oldfield, Fiona Payne and Russell O'Brien, told police in July that they saw Mr Murat near the Ocean Club holiday complex while they were searching for Madeleine.

They are said to have given statements to Portuguese police saying he introduced himself to them and said: "I am Robert. Can I help in the search?"

Now, without this detail, it would be easy to accept a case of mistaken identity, but they spoke to Robert Murat, who identified himself and offered to help with the search? If Robert Murat was at his mother's house throughout the evening of May 3rd, then the above is outright lies.

In summing up, we have Jane Tanner, who initially could not give a description of the "individual," she had seen, because it was too dark, who then gave a detailed description just hours later, who subsequently identified Robert Murat, though he was nothing like her original description, nor, I should add, any subsequent descriptions, which tallied with those of witnesses who had seen suspicious men hanging about in the vicinity of apartment 5A.

Then, we have the Tapas 3, who insisted that they had not only seen Robert Murat soon after Madeleine disappeared on the night of May 3rd, but that they had spoken to him, and obtained his telephone number, when those who knew Robert insisted that he had not been there.

It seems to me that we have more than a case of mistaken identity here and I hope that Robert Murat's legal action against the four of them, Jane Tanner, Russell O'Brien, Fiona Payne and Rachael Oldfield, helps to shed some light on what actually happened on the night of May 3rd. I am not optimistic, though, that the four of them will suddenly decide to come clean and explain why they appear to have lied in an effort to set up Robert Murat as the patsy in Maddie's disappearance.

1) For the full, detailed analysis of Robert Murat and the Maddie case, read Paulo Reis here

2) All quotes marked ** are taken from the Paulo Reis blog as linked to above.