Kate McCann: those questions she refused to answer - part 2 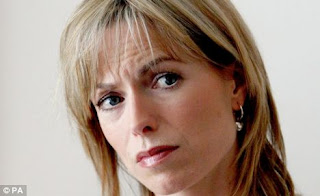 OK let's take a look at a couple more of those 48 questions.

We know that the only question Kate McCann answered in 11 hours of interrogation was question 49. So, having been shown photographs of her wardrobe taken on the night of Madeleine's disappearance, she refused to describe what she saw in them.

The above is an image of the wardrobe from the official police files. I can make out what looks like a heap of laundry on the second shelf from the bottom, a holdall on the next shelf up and perhaps something thin and flat two shelves up from there.

In police interrogation, one question often leads to another. So, what might the follow-up question have been to the one about describing the contents of the wardrobe? Where is that holdall? Do you still have that bag? There were stories about a blue sports bag disappearing and Gerry McCann denied ever having such a bag in Praia da Luz, but that looks rather like something that could be described as a (navy) blue sports bag.

When the English police contingent in Praia da Luz brought over the sniffer dogs, Eddie and Keela and their trainer Martin Grime, Eddie the Enhanced Victim Recovery Dog showed very keen interest in the wardrobe.

The above image shows Eddie next to the wardrobe in the McCanns' bedroom in apartment 5A, head in the air, barking. This is how Eddie alerts to having detected the odour he is trained to find: cadaver odour.

So, was there anything in the wardrobe, which was in the photographs shown to Kate McCann, that would have led to further very awkward questions? That navy blue holdall? The heap of clothes that look like they've just been thrown in there?

The Portuguese police obviously felt that the contents of the McCanns wardrobe had some significance in this case, which we can see was backed up by the reactions of Eddie the 'cadaver dog.'

No wonder Kate McCann looked somewhat shell-shocked when she was brought out of the police station, after having been constituted 'arguida.' Images of Eddie alerting to cadaver odour behind the sofa and in her wardrobe, as well as in other places and on her clothes, possibly left her wondering how quickly she could get on a plane and get out of there!

And then, of course, there was Keela, the CSI dog, alerting in many of the same places to the presence of blood!

Rather than, as she subsequently claimed, the PJ tried to incriminate her, in my opinion and possibly in the eyes of a good proportion of the general public, Kate McCann incriminated herself, in a way, by her refusal to answer these questions.

The McCanns found explanations for the presence of cadaver odour and blood found in their hired vehicle, which led to both sniffer dogs alerting, but I don't think I have read of their offering any explanation for Eddie alerting in the area of the wardrobe. Keela did not give her alert signal in the wardrobe, so Eddie was alerting to cadaver odour. Perhaps that's where Kate McCann kept the clothes she was wearing at work when she had allegedly been the physician attending 6 deaths before her holiday. Yea right!

A bit late and to the wrong person imo, it seems Kate is answering question 2.

Thank you Anonymous. Why would she think that Madeleine might be 'cowering,' in the wardrobe? She's implying that her daughter could have been afraid and accepting that fear, yet had been quite happy to leave all three children alone. Or maybe there's something else implicit there and Madeleine was known to hide and 'cower,' at the approach of certain people if she wasn't where she was supposed to be; in her bed. Just my opinion and pure speculation, of course.