On Monday this week, Kate McCann was having an 'emotional battle' finishing her book about Madeleine. 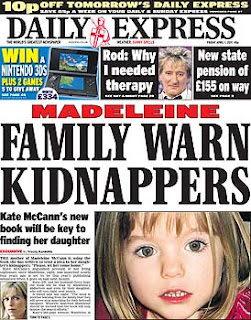 And today, we read in the very same newspaper, the Daily Express:

Kate’s 384-page memoir, Madeleine, is being published on the missing girl’s birthday on May 12 and has been translated into several languages, including Portuguese and Spanish.

So, on Monday March 28th the book wasn't finished and by Friday April 1st, the book has been translated into several languages? Bear in mind that the Express article was featured on the Sky News web site before midnight on March 31st and available to read online after midnight. So, the book had been translated by Thursday, just three days after Kate McCann was struggling with her 'emotional battle' to finish it. Now, I may be just one of those internet nutters, who are still not convinced that Madeleine McCann was abducted from her bedroom in apartment 5A in Praia da Luz, but I really don't believe the publishing industry works like that or as fast as that.

The family’s spokesman Clarence Mitchell said: “Kate is writing the book to raise awareness of her daughter’s disappearance and to pay private investigators to continue the search to find her.

If there is anyone in the developed world who has never heard of Madeleine McCann and needs to have their awareness raised after nearly 4 years of the McCanns seeking every possible opportunity to keep themselves and Madeleine's name in the media, then that person has been in a coma or lost somewhere in one of the few places in the world where the internet has not spread its web.

And those private investigators, where have any of them looked? There was Metodo 3, who had no previous experience of finding missing people, Kevin Halligen, now fighting extradition to the USA on charges of fraud and money laundering, and Edgar and Cowley, working from their office in Knutsford. Have they checked out those 'hellish lairs,' just a few kilometres from Praia da Luz? Have they interviewed that ex nightclub bouncer, who claims to know for certain that Madeleine was abducted by an international paedophile ring and taken to the USA?

Kate, and her husband Gerry hope the book will be read by Madeleine’s abductors and even by their daughter, who will turn eight next month.

So, are they trying to tell us that they think the international paedophile ring that abducted Madeleine will have taught her to read? And if Madeleine had been abducted by a bunch of paedos, who for some reason have not responded so far to all the media hoop-la, those abductors will buy a copy of the book, have a good cry, and take Madeleine back home? 'Oh we have been such naughty paedos. Here she is and we have made sure she has not missed out on education or been harmed in any way.' Remind me of the date today, someone. It is April 1st, isn't it?

A friend said: “Kate is hoping the book will keep the search going for another year.”

So, not expecting Madeleine to be found in the near future then? The McCanns think it may take more than a year for the abductors to feel really bad or for that 'someone who knows something,' to have an attack of conscience? Who's the fool today? The Express for printing this carp or anyone who believes it? Both probably!

'Family warns kidnappers.'? Warns them about what?

A friend said last night: “The book is another warning from the family that they will never stop searching for their beloved daughter. Whoever snatched Madeleine should be warned that the book will only bolster the search efforts.”

They will never stop searching? I didn't know they'd started. Paedos and residents of 'lawless villages,' beware! A horde of people armed with copies of Kate McCann's book will be descending on you, to beat you about the head with the 384 page hardback. I'm sure they're all quivering!

They also hope “whoever may be with her is treating her with the love and respect she so deserves”.

Right! So, the McCanns will be hoping that those kindly abductors are not leaving her on her own to go down the pub, then?

Kate has recently accused the Government of giving up the hunt for her daughter, saying a series of ministers had shrugged off her pleas for help.

She said: “We need action, not fluffy, worthless words.”

Action? Kate McCann wants action? Well, she could take action herself. She could go back to Portugal and answer the 48 questions she refused to answer, knowing that her refusal could hinder the investigation into her daughter's disappearance. She could also insist that a reconstruction of the events of the evening of May 3rd 2007 is carried out. If she is expecting us to believe that after nearly 4 years, her book could jog someone's memory about Madeleine's disappearance, then a visual re-enactment of the events, as outlined in the witness statements given at the time, would surely be a very helpful compliment to the book.

'Not fluffy words,' words, Kate, but I have my doubts that your 'account of the truth,' will be anything more than that, unless you will be explaining all the contradictions and discrepancies in witness statements from you, your husband and your seven holiday friends, and how your daughter managed to disappear into thin air with absolutely no trace of any stranger having entered the apartment and no credible sighting since then.

But hey ho! You hadn't finished the book on Monday and by Thursday it had been translated into several languages. Who am I to question this? I'm just an internet nutter of a blogger!

'So, are they trying to tell us that they think the international paedophile ring that abducted Madeleine will have taught her to read?' No need; according to Kate she was already reading Harry Potter at age 3!

Well, it is April 1st. If it hadn't been for the number of times the British media has taken the piss out of us "nutters " over the past four years, I would think the front page of today's Express was just a joke. But no, we are expected to swallow all this cr*p, hook, line and sinker! Still being written on Monday - translated into three foreign languages by Thursday. You just couldn't make it up, but they did.

"Kate, and her husband Gerry hope the book will be read by Madeleine’s abductors and even by their daughter, who will turn eight next month."

I assume the McCanns think the abductors are not Portuguese, Spanish, German, French or Dutch, so the abductors and Madeleine didn't read A Verdade da Mentira.
And no computers of course in hellish lairs, to read the excellent articles of the Internet bloggers and 'the truth of the lie'.

As Madeleine could be anywhere, the book has to be translated in as many languages as possible in order to turn it readable by her. As all North countries have lots of little blond girls to kidnap and treat like princesses without having to go to that tail of Europe that PDl is, the South ones seem more likely. Is the book translated in Arabic ?

I work for a translation company and there is no way in hell that her book could be translated that quickly.

Just more spin and horseshit to cash in on her and her husbands lie that has got waaaaay out of hand.