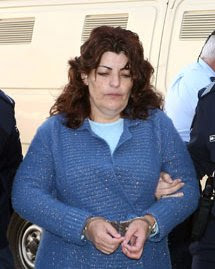 Eight-year-old Joana Cipriano disappeared from the village of Figueira, near Portimão, Portugal, on 12 September 2004 and was later assumed to have been murdered, though her body has never been found. A lengthy investigation ended with the conviction of Joana's mother, Leonor Cipriano and  Leonor's brother, João Cipriano, for murder. Leonor subsequently accused a number of PJ (Polícia Judiciária) officers of having beaten a confession out of her even though a prior confession is not admissible in Portuguese courts.

Today, Leonor Cipriano, who is serving 16 years in prison for the murder of her daughter, was given an additional 7 months sentence for lying about the torture.

The Public Prosecutor’s Office opened a criminal investigation and ordered a police line-up, with the CID officers named and accused by Leonor Cipriano of beating her;
The line-up took place with Leonor Cipriano behind a two-way mirror and she couldn’t recognize any of the aggressors;
The Public Prosecutor’s Office magistrate that was in charge of the criminal investigation decided to accuse the five CID officers, but didn’t mentioned, in the accusation sent to the Court, that Leonor Cipriano couldn’t identify any of the aggressors, in the police line-up; (Gazeta Digital)

Leonor Cipriano's original lawyer, Marcos Aragão Correia, has recently taken himself to Brazil and Leonor was appointed a public defence lawyer. Marcos Aragão Correia was allegedly paid my Metodo 3, a group of Spanish private investigators hired by Kate and Gerry McCann to search for their daughter Madeleine, to dig the dirt on Gonçalo Amaral, the PJ inspector who worked on both the Joana case and the Madeleine McCann case.

The trial of the PJ inspectors revealed many attempts by Leonor Cipriano's lawyer to discredit Gonçalo Amaral, both professionally and personally. The lawyer, Marcos Aragão Correia - who previously hit the headlines when he organised an underwater seach for Madeleine's body at the Arade Dam, in Portugal - has admitted that Metodo3 ordered him to do "an investigation" into the accusation of torture but he denies he is being paid just to frame Gonçalo Amaral. (McCann Files)


On 22 May 2009 Gonçalo Amaral received an 18-month custodial sentence, suspended for the same length of time, for misrepresentation of evidence. He was acquitted of the charge of failing to report a crime.

In December 2011, Scotland Yard detectives who are currently working on a review of the Maddie case, removed 30 boxes of files concerning the case, from the Metodo 3 offices in Barcelona. Those boxes of files may reveal what the detective agency, whose previous investigations centred around cases of money laundering, actually did in their alleged search for Madeleine McCann. The agency had no previous experience of searching for missing children. In February this year several detectives employed by Metodo 3 were arrested on charges of spying.

The McCanns, as we know, have not been too lucky in their choice of detectives in the search for their daughter. Apart from Metodo 3, there was Kevin Halligen, recently extradited to the USA to face charges of fraud.

We now await the start of the delayed libel case being brought by Kate and Gerry McCann against Gonçalo Amaral for alleged defamation in his book "A Verdade da Mentira", in which he detailed the investigation into Madeleine McCann's disappearance and the conclusion of the joint working teams of English and Portuguese police that Madeleine had probably died in apartment 5A at the Ocean Club in Praia da Luz. Personally, I don't see how Kate and Gerry McCann can win this case when the highest court in Portugal, the Supreme Court, upheld the decision of the Appeals Court in October 2010 to overturn the ban on Amaral's book. At the time of the successful appeal by Amaral..

The court said the decision to block sales of the book had broken "a constitutional and universal right: that of opinion and freedom of expression."

"The contents of the book do not breach the basic rights of the plaintiffs," the court said, according to the Jornal de Noticías newspaper's website.
"The book is an exercise in freedom of speech," Amaral told Portugal's Lusa news agency. "Portuguese democracy has won, as banning the book was unconstitutional." (The Guardian)

So, let's see where we have arrived at: Leonor Cipriano, her lawyer who has scarpered to Brazil, a bunch of dodgy detectives and a libel trial based on a book which has already been judged by both the Appeals Court and Portugal's Supreme Court not to have breached the McCanns' basic rights.

Good luck Dr Amaral! This truly is a tangled web!

Thank you, Anonymous. It would be wonderful if Madeleine were to be found alive and well, having been cared for. However, I think that is, sadly, highly unlikely after nearly six years and the world-wide media attention.