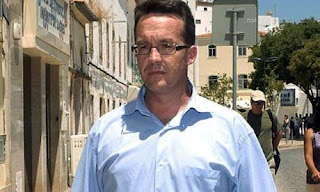 The best news I have read in a long time is that Robert Murat has engaged a firm of solicitors to take legal action on his behalf against a list of UK newspapers and one TV channel. Robert Murat's life has been blighted since the award-winning Mirror group journalist, Lori Campbell, decided that Mr Murat, far from being just someone trying to help, was an object of suspicion.

"Murat, 34, who lived close to the Praia da Luz apartment in Portugal where Madeleine went missing, was made an arguido, or formal suspect, after a British tabloid reporter voiced her concerns to Portuguese police shortly after the child disappeared. The Sunday Mirror journalist claimed that Murat's behaviour was reminiscent of Soham murderer Ian Huntley."

"He added with pride: "I helped the McCanns communicate what had happened the night before to the police. They were frantic with worry and frustrated that they were not being understood.

"I have also been translating witness statements for the last few days from Mark Warner workers and holidaymakers."

Much of that, we now suspect, was not true. But at the time, he made it sound like the police knew him very well and he was trusted enough to assist them."

"Like so much else about him, it just didn't add up. Later, as we drove past I deliberately glanced at him and waved goodbye.

He was holding court as usual at the centre of a dozen film crews. He stood, hands on hips, just yards from the police tape which cordoned off the crime scene. But as he caught my eye, he appeared to freeze for just a moment and his expression changed to one of a man exposed."

"On 14 May 2007, Murat was questioned by Portuguese police and became the first person to be declared an official suspect. On the same day Campbell told Sky News: 'It was just very reminiscent of the Soham murders, that was my first thought. He was hanging around, asking us questions and maybe trying to find out what we knew."

So, I send my very best regards to Robert Murat and his mother, Jenny. Robert's business has gone straight down the pan since those early days of the investigation, and in my opinion, he deserves to get as much as his specialist legal team can extract from those UK news media who probably made quite a substantial sum while publishing their totally unsubstantiated stories.

Go get'em Robert! And don't spare that award-winning journalist, who acted on her, "gut instinct," when she thought she saw a comparison to the Soham murders!

(I have made at least a dozen attempts to download an interesting video from YouTube this morning, but my NThell cable is on the blink...yet again! One of these days I really will get my act together and swap to a more reliable ISP! I shall post the video when the cable is stable enough to allow the download!)