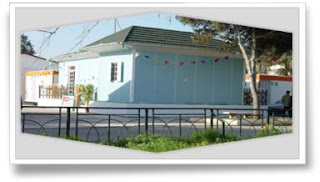 (Image: a school in the village of Aïn M'lila, where a ten-year-old child was abducted last week )
Apparently, until recently, the issue of child-trafficking for organs was thought to be just rumour and not based in fact. That was until the arrest last week of a Moroccan national in the Algerian region of Tlemcen, during an attempted abduction of a two-year-old child. The subsequent investigation uncovered a network, which runs through Morocco and Sub-Saharan Africa, of child-trafficking for harvesting of organs.

"But last week the national gendarmerie of the Tlemcen region succeeded in arresting a Moroccan national while he was attempting to abduct a two-year-old child. the investigation which followed led to the dismantling of an international network for abducting children and which includes Sub-Saharans, Moroccans and Algerians. The investigation revealed that this network was specialised in the abduction of children in Algeria for transfer for large sums of money to private clinics where their vital organs were removed."

Last Saturday, a ten-year-old girl was snatched as she left her school in the village of Aïn M'lila, in the Oum El-Bouaghi region of Algeria. It happened so quickly that no one realised immediately that there had been an abduction. A vehicle screeched to a stop, two men jumped out and grabbed the ten-year-old girl, thrusting her very quickly into the vehicle, which then sped off out of the village. Fortunately, some of the bystanders had noted the registration number and the police set up road blocks very soon afterwards. Later in the day, the vehicle was stopped, three men were taken into custody and the child returned to her home.

This incident in the village of Aïn M'lila, has understandably led to great anxiety amongst the population, especially after the press reports of children being abducted for the sale of their organs.

"The concern which there is in Aïn M'lila and other towns in the country has reached a peak in the population. Particularly after the disclosure by the national press of the trafficking in the organs of children abducted in Algeria, in which Moroccans are implicated and where suspicions fall on clinics in the town of Oujda. A case which reveals a very serious problem and which has just confirmed that the traffic in the organs of children abducted in the national territory is not the result of mere rumours."

On Tuesday, the problem was discussed on a national radio channel by Professor Mostefa Khiati, president of the National Foundation for the Promotion and Development of Research. (FOREM) He insisted that the National People's Congress must adopt tougher laws and joined Ahmed Ouyahia, former head of the government in calling for harsh punishment for kidnapping, even going as far as perhaps the death penalty. Khiati said that Algeria has no children's code in law and reminded listeners that when a child is reported missing that a search is, at present, only activated after 24 hours. He called for a rapid response from the security services.

Khiati called for an alert system, similar to those in other countries. He also referred to the changing nature of child abductions. Previously, according to statistics, most abductions by strangers had sexual motives, but now there is a, "nouveau phénomène qui se révèle au grand jour," (new phenomenon being revealed in this situation.)

So, in private clinics, where organs from abducted children are being bought for huge sums of money, doctors who are supposed to be pledged to save lives, are probably making a fortune out of selling those organs on to people who have the cash to look after their own health. Do those people ask where the life-saving organs have come from? Do they want to know? Are there people who have been on long waiting lists in countries around the world, going on transplant trips to Morocco, not even considering how those private clinics obtain a ready supply of organs? And lastly, why no international outrage about this vile trafficking? If such outrage exists, I have not seen any evidence of it.