Making connections with the past. 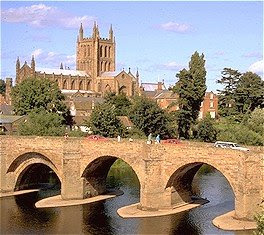 I was thinking this morning of how memories are not stored as discrete chunks in our brains, but as endless links and circuits that take us off on other tracks, like looking up a reference on an A-Z, and finding the road continues on page 89, and leads to somewhere quite unexpected.

So, thinking about my fast track to Victoria and back, took me over the page on my mind map to Hereford, where I used to live. This was via speaking French and where I went to college, studied the language and visited a university in Normandy.

The above view of the old bridge reminds me of a friend whose house overlooked the river. It is also reminiscent of my first year in the city, before the new bridge was open, and this old bridge was the only route out of Hereford to the south. Walk south over this bridge and you come to the playing fields, where I spent many happy hours with my children, playing on the swings, splashing in the paddling pool, and learning to swim at the leisure centre.

Hereford's department store, Chadd's, where we used to go after school on Thursdays, and eat huge, sickly meringues, filled with fresh cream, on the way to my daughter's ballet class. My friend E. would whizz up to the school gate in her rattly mini, and three of us, our two daughters and I, would climb in and off we'd zoom for the weekly treats.

The Cider Museum at Bulmer's, Hereford. This was actually at the end of our road, but throughout 11 years that we lived there, we passed the front door and never went in, only exploring it in the week before we left the city. The Bulmer's building at the end of the road was quite tall, and during the cold weather of winter, the snow and ice did not disappear from our road or gardens, until the sun had risen over Bulmer's. In late summer, the smell of cider-making, that heavy, sweet smell, hung in the air, and clung like syrup to clothes, hair and washing on the lines.

I went to college in Hereford, where I studied French. The college subsequently closed and became a college of the Royal National Institute for the Blind. A beautiful old building. I recall a few good gigs there, especially the Curved Air evening, which was brilliant.

I have been back to hereford quite a few times since I left. The centre has become, like many town centres, populated by chain stores, and where the old market used to be there is a shopping mall, with more chain stores. Yet, it seems that the character of the city has not changed so much in itself. It has a veneer of being dragged into the plastic-wrapped 21st Century, but at its heart, it is still a market town, the centre of a thriving rural area and community.

Just to finish off this little trip through these pages of my mind map, an image from a Herefordshire village, that reminds me of how diverse and beautiful the county is. This is Credenhill church. Credenhill is a village, where old buildings like this beautiful church, sit comfortably close to modern semi-detached houses, and the RAF base. I went for a meal at a chip shop there once. Well, actually, it was in the restaurant next to the chippie, where an adjoining door brought the food to the tables. It was very much a surprise meal: a surprise for my birthday, and also a surprise in that the restaurant, owned and run by the owner of the chippie, served gourmet French food and tables had to be booked well in advance and could only be booked if one had been referred by an existing customer! Snobbery? Probably! But the food was exquisite and the experience of finding such a restaurant adjoining a chippie in a row of local shops, on a housing estate, served me well for some time as dinner conversation!

Well, this track did lead me to somewhere quite unexpected! From Victoria, to a French university, to the city of Hereford, to a chippie! Haven't been in a chippie for years, not since the time I came out with the warm bundles and found I had locked the car with the keys inside, but that, of course, leads down lots of other roads, which I don't have the time or inclination to explore today.
Posted by AnnaEsse at 13:00