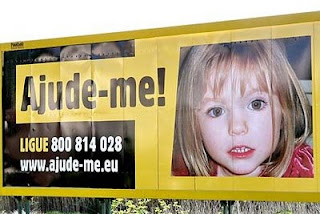 The author of this text is not a journalist, but with her sincere and objective words, she has captured much better than most journalists, the spirit of the folk of the Algarve and the Portuguese people in general.
More than a cry of revolt against Madeleine's parents' new campaign, the words their author brings to us here, are for all of us a true lesson, which only a mother's heart and reason can express.

Earlier today, 'Correio da Manhã' reported on the alleged removal of posters belonging to the most recent campaign that the McCanns have launched in the greater Luz/Lagos area; posters that apparently were torn off by less than cooperative residents of Praia da Luz. A few hours later, the ‘Evening Standard’ was reporting this situation as acts of vandalism, and discussions about the subject on message boards have been lively and intense.


I personally find the subject sad, yet interesting at the same time, but it really would take a very long post to fully paint the picture of what Luz has been going through, since that fateful evening of the 3rd of May 2007.

The fact that there are people who actually trace ANY sort of connection/comparison between the locals' worry about their only source of income - tourism - and respect or consideration for Madeleine, is offensive, to say the least. Are these people supposed to sacrifice the survival of their entire families, in the name of some sort of curse that befell the village, on the 3rd of May 2007? Are these people expected to lay down their lives, because it would look indecorous to try to preserve one’s salary?

These people have done EVERYTHING that they could do, without anyone even asking them to do it; they took time off work, they gave their best efforts, their money, their hearts and souls to help find Madeleine. Anyone who thinks otherwise has either been fed a lot of misinformation by certain media, or is simply cruel beyond comprehension. People walked their feet until they were sore, searching a radius of 15 kms around the village. Those who couldn't physically help, offered food and drink to those who could, and to the policemen and fire fighters who were on location, day and night. Policemen slept in cars, when they slept at all; some were offered a few hours of sleep on a sofa in the locals' homes. The people in Luz cried, prayed and worried themselves sick over a little girl that they didn’t even know, as if it was their own daughter, niece or granddaughter.

Meanwhile, all over the country, people despaired. During those first days, there was criticism of the parents, it would be false to deny it, but the general sentiment was 'we have to find the little girl before anything else'. Finding Madeleine was the only thing that was on everyone's mind, not only in Luz, but all over the Algarve - all over Portugal, really, as many of the early 'sightings' across the country attest.

I think most of you are aware that I live in Portimão, some 30 kms away from Luz. I remember the helicopters flying over our house, on their way to Luz or returning from a day of searches. I remember the posters that were put up on every shop window, every bus stop, every train station, hospital waiting room, supermarket entrance… Thankfully, we never had to endure what Luz suffered, with the invasion of journalists from all over the world, in search for yet another ‘human angle’ story, for that special scope. We didn’t have to endure their raucous parties night after night, either – but that’s another story entirely.

But even 30 kms away from Luz, the worry was palpable, omnipresent, inescapable. Madeleine was the subject of every conversation, everywhere, at all times. This may seem somewhat surreal now, with the benefit of time distancing us from those times, even a bit exaggerated. But in May 2007, it seemed there was nothing that we weren’t prepared to do, even if that implied behaving in an exaggerated manner.

It was precisely this enormous nationwide effort, this extraordinarily intense commitment of people all over the country - an effort that had never been made for 'our' (fortunately few) missing children... – that made what followed that much harder to swallow.

It’s easy to blame the shift in people’s perspective about the case, on the leaks from the PJ, that were only too happily published by the Portuguese media. It’s easy to blame the McCanns’ fall from grace on Mr Amaral and his team (a team that included British policemen and British experts), or on human nature, because the ‘populace’ was envious of the McCanns’ money, fame, good looks.

You will see a very different picture.

You will see the supposedly devastated, desperate parents, jogging, playing tennis, entertaining guests, posing for photographs, jetting all over Europe. You will see them smiling at the locals when the cameras were rolling – and not even saying ‘good morning’ when the employee from the Batista supermarket delivered their shopping at their apartment. You will see the British media, under the command of the McCanns’ spokespeople, ridiculing, insulting and humiliating the very same people who cried their eyes out for Madeleine.

And when the going got tough, instead of answering the police’s questions, they left Luz without a word. They turned their backs on those who had treated them like family, who had offered everything that they had, and then more.

Some will say that nobody asked the locals to do what they did. Others will say that the McCanns owed these people nothing, that they had to think about their missing daughter, about their remaining children. The McCanns had to protect their family.

Fair enough. God knows I’d protect my family with my life, if necessary; anyone can relate to such arguments.

But there cannot be two different standards just because it suits us.

The people of Luz are protecting their families as well. They have to earn a living, they have no fund to pay their mortgage when times are tough. They have no wealthy supporters, no famous sponsors. All that they have is their arms and legs to do their work, day in and day out, and that work just happens to be, for the vast majority at least, the tourist trade.

Even if for a moment, they put aside the insult, the arrogance, the humiliation that they suffered, they’d still be left with a very basic choice: a campaign of highly dubious success – or the need to restore the shattered image of their village as a safe, family friendly holiday destination.

Finally, just a thought about the proclaimed purpose of this campaign: the McCanns announce that they want to enlist the help of the people of Luz, to jog their memories, to collect any information they may have about the little girl, and the night that she disappeared – in the belief that a member of the population of Luz could have deliberately held information back from the police.

I think in English this is called 'adding to the insult'.

I’m sorry if this offends anyone, I definitely don’t condone the shredding of posters in this case; but if I ever come across one, I’ll quietly, calmly remove it and place it in the paper recycling bin. I don’t need posters to remind me of a little missing girl that didn’t deserve the destiny that befell her.

And neither do the people of Luz."

Anna, it's here, the original in English http://joana-morais.blogspot.com/2009/03/torn-posters-and-shredded-lives.html

Thank you, Joana. That's kind of you and will save me a lot of trouble. I'm so tired after work today and couldn't finish it.