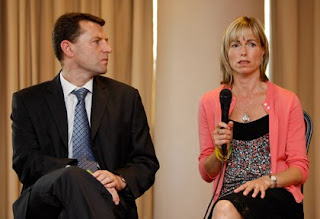 "It is the first time Mrs McCann has returned to the country since being quizzed by police over her daughter's disappearance.

They are considering suing the former Portuguese police officer Goncalo Amaral over his book, In The Truth Of The Lie, in which he claims that Madeleine is dead and questions the McCanns' account that she was taken while they were eating with friends nearby." (Daily Telegraph 24/09/09)

Having read Gonçalo Amaral's book, "The Truth Of The Lie," I can say that, as far as I can see, the book is simply a narrative about the investigation and the avenues being explored by joint working teams of British and Portuguese police officers. In fact, the original hypothesis of death came from an English expert, Mark Harrison.

From chapter 16 of Amaral's book:

"After a week of intense work, Harrison presents the results of his study to my coordinating group. Even if we were expecting it, his conclusions confirm our worst fears. The most plausible scenario is the following: there is no doubt that Madeleine is dead, and her body is hidden somewhere in the area around Praia da Luz. He praises the quality of the work carried out by the Portuguese authorities in trying to find the little girl alive. According to him, the time has come to redirect the searches in order to find, this time, a body hidden in the surrounding area. "

"Great Britain has at its disposal the world's biggest data bank on homicide of children under five years old. Since 1960, the count is 1528. Harrison is well acquainted with its contents. He often draws information from there which helps him to resolve similar cases. Valuable information can be found there on on various criminal modus operandi, places where bodies are hidden, techniques used to get rid of a body. He relates that on one occasion, thanks to the data, he was able to deduce the maximum distance a body might be found in relation to where the crime had been committed.

The figures quoted in the report he hands over give us the shivers. The crimes, including those of a sexual nature, are committed by the parents in 84% of cases; 96% are perpetrated by friends and relatives. In only 4% of them is the murderer or abductor a total stranger to the victim. In this roundabout way, Mark Harrison points out that the guilty party may be a person close to Madeleine, and even her own parents. From now on, we have to explore this track, especially as the others have proved fruitless."

So, Kate and Gerry, you may be suing the wrong person as it was Mark Harrison who put forward, very strongly, the case for Madeleine's being dead and the idea that someone close to Madeleine, even her parents, may be the guilty party. Being of a rather cynical nature, though, Mark Harrison probably isn't worth suing and I guess you have calculated how much money may have been made by the sale of Dr Amaral's book.

The rest of chapter 16 can be read here.

Labels: Gonçalo Amaral, Madeleine McCann, The Truth of the Lie

that photo spooks me... it's like some weird kind of karoake snap

Have you heard that Goncalo has written another book, due out on 3 October?