Madeleine McCann, "is in a secret lair." 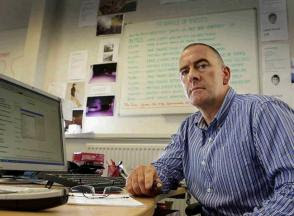 "The Ulster detective leading the search for Madeleine McCann today reveals his most chilling theories yet, exclusively to Sunday Life. Hardened ex-RUC cop Dave Edgar told us he is convinced that little Maddie is imprisoned in a hellish lair – just like kidnapped sex slave Jaycee Lee Dugard."

Right! And just what makes you think that, then, Dave?

Ok, Dave, so, in spite of the fact that most missing children have been abducted by a parent or a close relative, we have here three cases of children who turned up years after being abducted. I see. And, wait a minute, there's more!

"There was further backing for his theory when American boy Ricky Chekevdia was found hiding with his mother in a tiny “secret room” two years after he was kidnapped while caught in a custody battle."

Dave, every week people are winning the lottery. This confirms my belief that I am definitely going to win it! This idea is as plausible as your suspicions being confirmed, based on a handful of cases in the past 18 years since Jaycee Lee Dugard went missing.

Dave, I wonder what your ex-colleagues in the police would think. A few children out of the hundreds of thousands who have gone missing over the past few years have turned up, having been hidden away in seclusion, and this confirms your suspicions that Madeleine must be in a cellar somewhere?

What about the many, many children who were reported as having been abducted, and who were actually killed or sometimes, hidden, by parents or someone close to the family? Does that tell you something? Not raise your suspicions? Little Marina Sabatier, for example, reported missing, killed by her parents. And Shannon Matthews, reported missing, and found to have been hidden by a relative. Hang on, though, Dave, one of those children you have mentioned, Ricky Chekevdia, was actually found hiding with his mother. So, maybe we can count him out when we are talking about children being hidden in secret lairs!

Dave, you'd be the laughing stock of any police force if you came out with that kind of theory. Hang on, guys, my suspicions are confirmed about this case because three out of hundreds of thousands of kids have been found years later.

"And despite fresh leads taking his probe to Australia and Barcelona,"

Barcelona, Dave, the case where, according to the Daily Mail, your investigators:


Well, I can see that you carry out rigorous investigations, Dave, from that desk of yours in Knutsford, Cheshire!

Right! Back to this secret lair, which you say is, "...just 10 miles from where she was snatched in Praia da Luz two years ago." Now, you don't actually tell us why you think that, but could it be because of what you believe about the area?

"Dave said: “Jane is a very reliable witness and there were other sightings of this man, who Jane saw carrying a little girl in a blanket, in the days leading up to the disappearance.”

He feels this is the lone prowler who has Maddie stashed in a cellar or dungeon in the lawless villages around Praia da Luz."

"...lawless villages," Dave? Any chance of your naming these villages so that we can ask the inhabitants what they think about their places of residence being called, "lawless."? The Lone Ranger, I mean the lone prowler, who managed the impossible task of getting Madeleine out of that narrow window in the apartment, is holding Madeleine in a cellar, or even a dungeon, in a lawless village in the wild west, I mean the mountainous regions around Praia da Luz.

And you know this because?

"Dave says the region where he feels Maddie is being held has attracted many strange characters, including convicted sex offenders.

“I don’t want to generalise or make gross exaggerations, but there are people there living on the edges of society,” Dave said."

Dave, why not try Peckham? There's loads of people living on the edge of society there, and probably lots of strange characters.

And finally! Dave, I see that you are chasing up those leads!

"He is now investigating leads on six child sex offenders, 78 other rapists and sex attackers and 22 vagrants."

Absolutely brilliant, what a great piece of writing, just my cup of tea.
Thank you.