Madeleine McCann: Her parents have never requested the re-opening of the investigation into her disappearance. 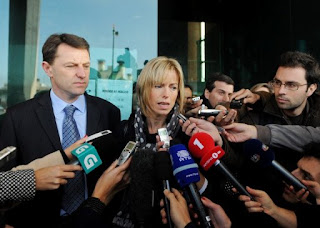 Madeleine McCann's parents, Kate and Gerry, have never requested the re-opening of the investigation into their daughter's disappearance.

Neither the McCanns nor their lawyers have asked for the re-opening of the case, was confirmed by the office of the Chief Prosecutor of the Republic, putting an end to speculation.

Despite its being three years since the little British girl was reported missing, her parents have at no time taken the necessary steps for the Portuguese authorities - those who hold jurisdiction - to carry on with the case.

As a reminder, the investigation by the Portimao PJ's Department of Criminal Investigation was harmed when the McCanns and their friends left Portugal: the British people never wanted to participate in a reconstruction of the events surrounding Maddie's disappearance, blocking several diligences of the investigation.

"Her parents insist on a so-called private investigation which has produced no results," a police source confirmed, stressing that, "the latest revelation from the British media about a new witness in Portugal has no credibility, but is part of an orchestrated campaign that is a long way from an investigation," an opinion shared by the Prosecutor's office who stress that, "it's common practice for the media to disclose an abundance of imaginary news stories from time to time."

"If we have evidence with any reasonable degree of credibility, the case can be re-opened," the Prosecutor's office concluded.

Hat tip Mercedes for drawing my attention to the above.

We are all waiting for the McCanns request to re-open the investigation. Perhaps their advisers have forgotten to tell them that it's not worth to do so through the press but must be lawyers who make the formal request based on credible data. Errr... You know!

we will have to wait until hell freezes over before the McCann's request a re-opening of the official investigation...

I think the McCanns would have been only too happy to see the investigation re-opened in Portugal. Just so long as it was on their terms...

That UK and PJ files are amalgamated (so Gerry can see what is on them and plan accordingly);

that the pressure he has sought to put on both Pt and British governments finally worked, there is an acceptance the McCanns are innocent and only a stranger taking Madeleine from Portugal should be further investigated.

But both sides are deadlocked. The McCanns know that British authorities continue to investigate them because they are not innocent and the respective governments in both countries will back the police and their certain knowledge there is no stranger abduction for the PJ to investigate.

As Gerry continues to vent his spleen we have seen absurd reports in the British press, there is to be a "review" and Leicester Police will no longer be on the case. But just like any other criminal, Gerry McCann does not get an entire police force the sack because they are convinced, on the basis of the totality of the evidence, that he masterminded the disappearance of his own little girl. He can bounce, swagger, rage, brief the press, lobby parliament, attack the British and Portuguese Police just as much as he likes, nothing changes their certain knowledge about him, his wife, David Payne and the rest of them. They alone, hold the key to unraveling the mystery of Maddie and the police will get them in the end.

the 3 Arguidos seems to be down due to them not renewing their website in time...

just wondering if you know where they've gone

Sorry Anonymous, I don't know. I'll see if I can contact Bren

Here it is, thanks to Carly.

Too many discrepancies for any reasonable person to accept in their version of events.
Of many of these puzzling so called 'facts' put forward by the Mccann team was that the shutter to the flat was 'jemmied'- not so, the shutter could only have been raised from INSIDE the appartment.

According to some reports on the Internet, Gerry McCan was put on the sex offenders list in 2002 and removed from it in 2003. I wonder why?