Justice has prevailed: Kate and Gerry McCann have lost their appeal to Portugal's highest court

It's been a long time coming, but today justice has prevailed. The Supreme Court in Portugal has turned down the McCanns' appeal for a review of the decision on Gonçal Amaral's book and Snr Amaral will not have to pay any money into the McCanns' hands.

The court's decision very quickly hit the mainstream media. Why? Because Madeleine McCann became the world's most famous missing child, thanks mainly to her parents need to keep her name in the world's media. On return from Portugal, after being made suspects, arguidos, they hired a PR spokesman, Clarence Mitchell. Why would parents of a missing child need PR? Why would they have such a great need to keep their names in the media?

The mainstream media loved the McCanns because any story about them or about Madeleine sold newspapers and I'm sure the fund set up by Kate and Gerry, allegedly to help find their daughter, but used for, in my opinion, dodgy detectives and suing anyone who criticised them, benefitted from media attention. And remember folks, the fund is not a charity: it's a company limited by guarantee.

Kate and Gerry McCann have made the most of the opportunities presented by publicity given to other stories about missing children, especially those who have been found safe and well after many years. Get in there, newspapers and get a quote from the McCanns.....it gives us renewed hope...bla bla bla. However or whenever a child disappeared and was found years later, it gave the McCanns hope!

Madeleine, according to her parents, disappeared into thin air from an unlocked apartment in a foreign country.  No evidence of abduction, though: no forced shutters and absolutely nothing left behind by this supposed abductor. There are witnesses though. Two dogs, who had had over 200 successful cases before the McCann case, alerted only on places and on items belonging to the McCanns or which the McCanns had used. Well, Gerry said "Ask the dogs, Sandra," and maybe it's time to go back to what the dogs actually said: they said there had been human blood and cadaver odour on items and in places connected to the McCanns.

The dogs said it loud and clear. Justice has prevailed for Gonçalo and now we want justice for Maddie. It has been a long time coming. 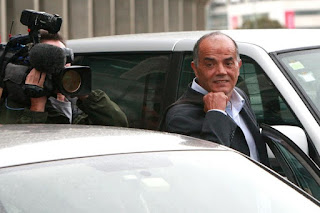 I know there is a lot happening in the world at the moment, but after all the newspaper attention this case has been given in England over the years, there has been NOTHING mentioned on the news tonight!! WHY???

Congratulations GA.......praying the truth will eventually be found!


The dogs dont lie. Congratulations GA. Your motive for writing is the true Christian one - sad that the parents cannot see that.