And Kate and Gerry McCann are....disappointed! 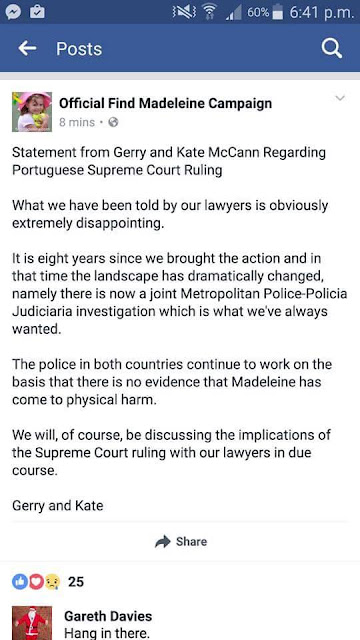 Kate and Gerry are "extremely disappointed." Well, I can appreciate that having spent 8 years and thrown a great deal of the search fund for their daughter at suing the police officer who was trying to find her, they must be disappointed. Coulda made a million €s there folks! Drat! This is so disappointing!

Eight years since they brought the action. Rather a long time to be waiting for that payout from Gonçalo and now it's not coming. Drat!

And in that time "the landscape has dramatically changed." It sure has. While the mainstream media have jumped on every trivial utterance from their mouths, linked them to every high profile missing child case anywhere in the world, the McCanns have seriously lost credibility in the eyes of the general public as can be seen by reading comments, where they are allowed, on the web sites of major newspapers.

While Kate and Gerry state that they have always wanted a joint investigation by the Metropolitan Police and the Policia Judiciaria, the original investigation was carried out jointly by a team of British police officers working with the PJ in Portugal. In the years since the Metropolitan Police have been involved, hundreds of people have been interviewed, millions have been spent, but the original people involved in the case, the McCanns and their friends, have not been interviewed. Now, why didn't the Met Police go back to the beginning?

While I think the Met Police have been looking in all the wrong places to find what happened to Madeleine, I do not believe the Portuguese police believe that Madeleine has not been physically harmed. I believe the PJ are still hoping for justice for Madeleine and justice for themselves too, after years of offensive reporting about a "botched investigation," and articles describing them as "sardine munchers,"

As for the "disgraced police officer," as the British press described Amaral on many occasions, he has finally been exonerated in court. If the McCanns are looking to take this to the European Court, maybe they should bear in mind the recent decision of that court that a Portuguese journalist had the right to express his opinion. They could end up even more disappointed.

Thank you, Lesly. I woke this morning with a lovely happy feeling, for Gonçalo, Madeleine and Brenda, with a sense of being part of a great bunch of people who were all committed to justice. We have reason to be proud today.

Brilliant post, and thank you for your hard work & persistence over the years whilst people like me 'wake up'. Finally some measure of justice has been decreed by a very high judicial standpoint that cannot be ignored. At one court appearance where Gonçalo was too ill to attend, I was aghast with Kate's rant. First & foremost was the complaint about having to arrange childcare! Really!? At 12 you may have legally got away with it! Then the flights & the cost to the fund came into it. And finally talking about the pain HE has put THEM through!!!! Leaving the events of that week aside that 'they started', they certainly started the court case pointless when the files are released anyway, just limiting access to those who don't look. But after his appeal won, so 1-1 if you like, THEY appealed it 2 more times, THEY could have left it at 1-1 but THEIR egos couldn't take it. Meanwhile HE had had all his assets frozen for 8 years whilst they have lived like millionaires, quite literally as the book raised £1.2 million that wasn't needed for the search once UK government ordered The Met to continue the wild goose chase of sightings in 131 countries! I was surprised THEY haven't brought out a Maddy version of Where's Wally? to help raise funds & train the public to 'keep looking for her'.
So yes it is a day to be proud, especially considering the damage they did to so many others lives in Portugal who did so much & helped selflessly only to be slapped in the face by this pair & Cliarence 🤥. The Teflon McConns are finally starting to lose their non-stick coating-maybe it only came with a 10 year guarantee... 😆