Kate and Gerry McCann: No Longer The Teflon Two? 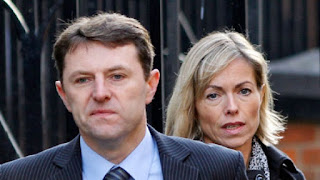 Since Madeleine McCann disappeared into thin air nearly 10 years ago, her parents Kate and Gerry McCann have clearly felt confident enough to sue anyone who criticised them in print. They confidently repeated the mantra that there was no proof that Madeleine had come to harm, although more recently they have added the word physical: there is no proof that Madeleine has come to any physical harm. Perhaps they reconsidered that mantra because if Madeleine had been abducted, were we to accept that they truly believed that abduction did not harm a child?

Kate and Gerry have courted the media for 10 years, being able to grab the media's attention with a comment whenever a child who had gone missing many years before turned up safe and well. This gives us renewed hope bla bla bla....

Eight years on and the Portuguese Supreme Court has decided in Gonçalo Amaral's favour. The text of the Supreme Court's decision has been translated and the British media is on a wave. Kate and Gerry were not cleared of involvement in their daughter's disappearance. The lifting of their arguido status with the archiving of the case did not mean they had been declared innocent.

Thanks to Joana Morais, we have the translation of what are probably the most important parts of the Supreme Court's statement.
This is Joana's introduction to her translation: "Court acquits Gonçalo Amaral and points out that the couple was constituted as arguidos (suspects) with a "well-founded suspicion" of having committed a crime."
Several British newspapers, including the Sun, the Mirror, the Mail and the Metro, have picked up on certain important aspects of the decision by the Supreme Court.

The Judge-Counsellors continue: "It is true that the criminal investigation was eventually archived, in virtue of none of the evidence that led to the constitution of the claimants as arguidos was confirmed. Nonetheless, even in the archiving dispatch serious reservations are made about the verisimilitude (reality of) of the allegation that Madeleine had been abducted."
The theory of abduction is called into question.
As to the presumption of innocence invoked by the parents, they (Judges) consider that one should not say "that the claimants were acquitted through the order of archiving the criminal proceedings (investigation). The archiving was determined because it was not possible to obtain sufficient evidence of the practice of crimes. It does not seem reasonable to consider that said archiving dispatch, based on insufficient evidence, should be equated as substantiation (proof) of exoneration".

Kate and Gerry were not cleared of involvement in their daughter's disappearance.
So, what now? None of those newspapers can be sued for what they have printed this week because they are quoting the published text of the Portuguese Supreme Court's decision. Up to this point, Kate and Gerry have been able to repeat their mantra about having been cleared. They haven't been. They have used money from the fund that was supposedly set up to search for their daughter to drag Gonçalo Amaral through the courts and they have been given an easy ride by the British press, even though they admitted to having left three small children alone in an unlocked apartment in a foreign country. Maybe the Teflon has worn off!
I imagine that in their arrogance they thought they were free and clear and they were going to leave the Portuguese court with loadsa money. Nope! If they are now contemplating taking their case to the European Court, perhaps they should bear in mind the recent decision by that court that a Portuguese journalist had the right to express his opinion. Taking their case to the European Court of Human Rights could see this case taking several more years and end up costing the McCanns even more in legal fees than they are already liable for. I guess their other mantra, "It's up to our lawyers," will come into play here once again, but if they have been guided by those lawyers for eight years, maybe it's time to engage new legal advisors.

Labels: Amaral The Truth of the Lie (Links to all chapters), Gonçalo Amaral, Madeline McCann

There. Was. No. Abduction. Simple.

Cadaver dogs seem pretty reliable in other cases so why not in this instance.

There is only one truth. It's knowing which one. Could this finally be the thin end of an investigative wedge by MSM?

they need to be forced to answer the 48 questions and take a lie detector test, its their fault she isnt here to start with!!

Guilty .
Force them to take a lie detector test.
PROSECUTE THEM for abandoning THREE children ALONE in a strange country to go for a meal .

I have always said that they know what happened to Maddie we went to live in Praia Da Luz just after it happened & lived near there why didn't they take advantage of the child minding offered where they were staying,

i agree, something very strange not to take up the childminding facilities that were available

I have looked at the various newspaper articles and the comments appertaining to them. It seems that even people who believe and have sympathy with the McCann couple are now finding it all something of a bore. I wonder if the ten-year jamboree will be a little more low-key as a result of all this.

Three children drugged and left in an unlocked apartment in a strange country, I hope when this is over they are locked up for life, they know exactly what happened to that poor wee soul, how could any parent do that to their own flesh and blood, there will be hell to pay if they are not charged and penalised for this.

When alls said and done it doesn't sit well. These are educated people, they should be aware of dangers leaving children so young home alone! A strange room, a strange country...unlocked room? When our kids were that age they often woke during the night! There were enough adults in the party to take turns of sitting with the children if they were too mean to pay childcare fees! They are guilty of neglect. Abandonment and being totally selfish! Can't imagine any circumstances when we would have left our family alone..........not even in hotel where there was listening serve....kids will happily fall asleep in a buggy, a chair or sofa.........see loads doing it on holiday, won't harm them to do that......I get angry when I think about that poor wee girl!

Why would it be that the couples who were part of the McCann group, were never seen together again, and did not support the McCann couple ??? Is not strange???? By what, circulated information, the employees of the Hotel and some elements of the PJ, would be, Swing couples. It's strange that they disappeared in the fog. What do they need to hide, to disappear ?????

I have been told that the babysitting service was free! Why not relax and let someone watch over the babies. They were quite happy to let the crèche facilities do it all day. God bless her x

They should be arrested for child neglect firstly. Then asked all questions under lie detector. They are guilty and most of the British public think so. Guilty. Making money from the death of the daughter they probably drugged and killed. Cadaver dogs don't lie.

We are starting to see some news on the supreme court case and Maddy again here in Australia. There was an article about the court case the other day but also a new one today on a theory that Maddy got up and walked out to look for her parents.

It is a theory I'm surprised hasn't been raised before but of course even for her to walk out the Patio door and 'get lost' means someone would have picked her up anyway, so I guess it supports the theory of Abduction...