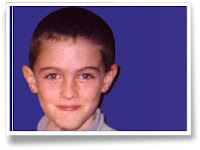 I only came across Enfants Kidnappés when I was looking for news of Madeleine McCann's disappearance. For some of us, I guess, one of the effects of the Madeleine case has been to focus our attention on other cases of missing, abducted and murdered children. I know it has done that for me. I look at Karl Zero's web site, Enfants Kidnappés and I realise that I have never heard of most of the children he is talking about. Estelle Mouzin. Who? Rui Pedro? Thanks to Karl Zero, I now know about those children. I now know that Jonathan Coulom was abducted and killed in 2004. If Jonathan's case has been in the UK or any media outside France, I missed it. Karl Zero publishes news about Jonathan's case this week. This is my translation of the Karl Zero report.

The schoolboy disappeared into thin air from a holiday camp in the middle of the night.

The investigation into the abduction and murder of Jonathan Coulom could gain momentum this week. Last year, IRCGN specialists in criminal analysis, went over the file with a fine-tooth comb. New leads opened up, "Cell 44," was reinforced. Ludovic Romanens met with Jonathan's father. He particularly mentions that he is waiting for an internet site that is about to be put online.

Jonathan Coulom disappeared on Wednesday April 7th 2004 in Saint-Brévin (Loire Atlantique) he was eleven years old. To his parents, he was a shy, engaging and resourceful child. He was 1.45m tall, with short chestnut-coloured hair, blue eyes, and he wore an earring in his left ear. Originally from Orval, the schoolboy disappeared into thin air in the middle of the night from a holiday camp where he was staying with his class.

His mates in the dormitory did not hear him go out, nor did the two leaders who were sleeping in the same corridor. For the police dogs, the trail was lost at the entrance gate of the, "Hermitage," holiday camp. After going over the area, the investigators obtained some unidentified DNA on his bed. They also made a strange observation: all his things were still in the wardrobe in his room. He had disappeared dressed in his pyjamas, with bare feet. An official enquiry was opened. Two hundred police officers worked day and night, searched uninhabited holiday homes, woods, water-holes. The searches lasted several days in the small seaside town.

A murder committed by a calculating sexual pervert.

In spite of this important work, Jonathan Coulom was found dead a month and a half later, on May 18th 2004, his body tied up, weighted with a cinder block, was fished out of the pond at a manor house in Guérande, which had been converted into living accomodation and business areas. The perpetrator was thought to be a n introverted and calculating paedophile, who would have known the area perfectly. He would have had time to identify places and to choose his sexual object from amongst the children on holiday.

Other avenues being explored.

That thesis was the one favoured for a long time by the 15 investigators of, "Cell 44." Four years after the events, other leads are now being looked at. Saint Nazaire's deputy prosecutor, Jacques Noguellou, points out that the police are working on, "new avenues," relaunching the enquiry with the examination of the 20 volumes of the file. "Uncertainty about the date of death, undoubtedly, led to the enquiry being too narrow," said the magistrate. Jonathan could have been killed soon after his abduction by a murderer acting on impulse.

The internet site and the appeal for witnesses.

An internet site was put online on Tuesday April 22nd 2008. Images of the area, some details of the investigation, photos of Jonathan and an appeal for witnesses are on the site: http://www.dossierjonathan.fr/
There is also information from several anonymous letters, received recently by the investigators. Jonathan Coulom's attacker has not yet been identified.
The internet is being used more and more in cases such as this, but Jonathan's is perhaps a first where the public can contact the investigators directly.

*****************Report ends*****************
I don't know what, "Cell 44," is, having made a brief reccie mission this morning to find out, with no success. Similarly, Ludovic Romanens. No idea and no information found that tells me what he has to do with this case. When I make headway with my searching, I will post the details...or perhaps someone reading this knows and will tell me!
Here is that web site again: