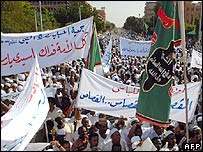 Well, the religion of peace does it yet again! Thousands of people were out on the streets of Khartoum following Friday prayers, (Amazing the kind of actions that are incited by those prayers!) demonstrating against what they see as a the lenient sentencing of Gillian Gibbons. Gillian is the British woman who has been working as a teacher in Sudan, who committed the heinous crime of allowing a class of small children to call a teddy, Muhammed.

"Gillian Gibbons, 54, from Liverpool, was jailed for 15 days on Thursday after allowing children in her class to name a teddy bear Muhammad."

Yes, after Friday prayers, encouraged by their devotion to their faith, there were people out on the streets of Khartoum, burning effigies of Gillian Gibblons and calling for her to be executed!

According to Sky News:

Indeed, the demonstration is said to have been orchestrated, rather than having been a spontaneous outburst of feeling.

"The crowd had been ferried in on pick-up trucks after Friday prayers. Riot police kept them away from the presidential palace.

Journalist Andrew Heavens told Sky News: "There were signs that this protest was highly orchestrated. This was not the spontaneous act of a mob."

Clearly the mob had been incited to action by the words of the clerics at Friday prayers. What kind of religion is that, where its preachers encourage people to violence and calling for a death penalty for something as trivial, in my opinion, as calling a teddy bear Muhammed? It's a religion that cannot cope with any kind of criticism. It's a religion whose followers take to the streets, facing contorted with hatred, inciting violence and calling for executions for anyone whom they see as offending their oh-so-delicate religion.

Ms Gibbons was jailed for 15 days

"Imprisoning this lady does not satisfy the thirst of Muslims in Sudan," said the cleric, Abdul-Jalil Nazeer al-Karouri, a well known hard-liner."

Does not satisfy the thirst of Muslims in Sudan? What are they thirsting for? Answering yet another of my own questions, I guess it's blood they're thirsting for. What strange and inhuman people the religion of peace has created.

I simply do not understand a religion that incites its followers to violence and killing over slights and misdemeanors.
The Religion of Peace my a$$!!!!!!

Posted by AnnaEsse at 21:36 No comments: