And according to The Express, "At last, sad Kate can smile again." Again? And here she is! Is that a smile or is she showing off the work of her orthodontist?

I note, in passing, that Gerry has changed his hairstyle. Is this because he is trying to conceal the fact that he is rather follically challenged, or could it be so that he looks less like suspect number two thousand and twenty-four, "Spotty Man."?

Returning to the Mirror and that "rare moment of joy":

KATE McCann flashed a rare smile as she and husband Gerry promotes their book Madeleine in Holland.

Perhaps Wendy Fuller, who wrote the brief article for the Mirror, would change her mind about Kate's "rare smile" if she were to view this video from September 2007? 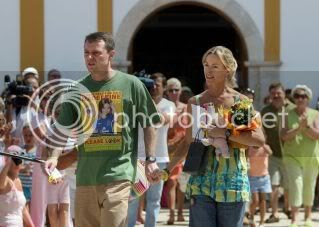 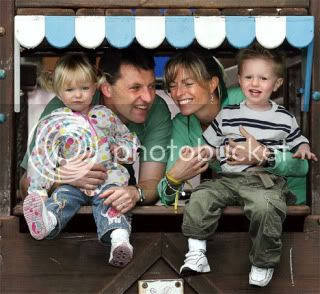 And doing just as well on a trip to the zoo with the twins in Portugal just a short time later!

I shall leave you with this video from May 2008, "The Rare Smiles of Kate & Gerry McCann."


Towards the end of the video, another case is mentioned, which is said to have some similarities. That was the case of Sabrina Aisenberg, who disappeared in 1997, at the age of 5 months. Her mother stated that she put Sabrina to bed in her cot and some time later, Sabrina had disappeared. Because of inconsistencies in their statements, the Aisenberg parents had their home 'wire tapped,' and over 60 conversations were recorded, which were thrown out of court because they were inaudible. In 2008, a 'jail snitch,' came forward and stated that he believed another inmate, Scott Overbeck, was somehow involved.

We have a child who disappeared without trace, parents whose statements hold inconsistencies, alleged odour of decomposition, although it doesn't sound like dogs were brought in.

Note at 0.24 of the video, Marlene Aisenberg, Sabrina's mother, appears to be using the script later used by Kate McCann, "Sabrina needs her mother and her father.." She also talks about Sabrina's siblings. Nothing suspicious, I suppose, in the similarities here: it's just worth mentioning, in my opinion, that the McCanns appear to have had a previously used script to follow. Also worth noting is that the Aisenbergs sued the police!

It is said there is often a lot of nonfiction in fiction and a lot of fiction in in nonfiction. Kate McCann's new autobiography, Madeleine, is a prime example of this axiom. I say 'autobiography' because Kate's book is not so much about what happened to her missing daughter, Madeleine Beth, but about Kate McCann nee Healy - her life, her loves and her losses, her trials and her tribulations. In reality, very little of the book is about the missing little girl who vanished in Praia da Luz, the lovely vacation destination in the Algarve of south Portugal; it is a carefully crafted revisionist history of one of the most puzzling missing children's cases in recent years and a strident defense of the characters and behaviors of Kate and Gerry McCann.

Read the full review on the "Women in Crime," blog (Link above)

Pat Brown has also written a book about the Madeleine McCann case, which is available, though only on Kindle, from Amazon, "

"Profile of the Disappearance of Madeleine McCann (Updated)"

42 reviews of Pat's book on Amazon are all 5 star.

Pat Brown again, speaking about the case when Madeleine had been missing for three years.

Posted by AnnaEsse at 14:04 No comments: 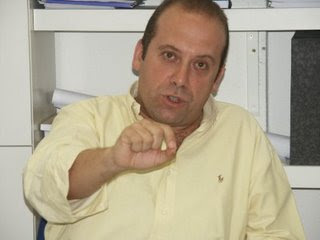 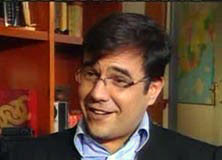 Francisco Marco; director of Metodo 3
This is what Kate McCann states on page 283 of her recently published book, "Madeleine."

We have no doubt that Metodo 3 made significant strides, but unfortunately, in mid-December, one of their senior investigators gave an overly optimistic interview to the media. He implied the team were close to finding Madeleine and declared that he hoped she would be home by Christmas Gerry and I did not pay much heed to these bullish assertions”.

"Significant strides."? In what way? How did they do this? Kate McCann doesn't actually say what these "significant strides," were, though she goes on to tell us that one of the "senior investigators," hoped that Madeleine would be home by Christmas. Of course, we all know that she wasn't, but I wonder why we never read in the newspapers that reported this hope that Kate and Gerry thought Metodo 3 was making "bullish assertions."

So, Kate McCann waffles on without giving details of the "significant strides."

“That glitch apart, Metodo 3 worked very hard for us and, just for the record, their fees were very low: most of the money they were paid was for verified expenses…we maintain good relations with Metodo 3 today. We had the sense that they genuinely cared about Madeleine’s fate…”

Wow! A "glitch."!! A child is missing, allegedly abducted from her bed by a paedophile, and a company's overly optimistic suggestion that she would be home by Christmas was just a "glitch." Nothing to get worked up about. We've now got a spare place at the Christmas dinner table, let's invite one of the relies! I guess I might have seen it as a bit more than a "glitch," a trivial set back, but hey ho! I've never mislaid a child.

Who introduced this company to the McCanns? They were in search of a group of private detectives to carry on the search for their daughter. So, who introduced Metodo 3? Why not a company that had experience of searching for missing people/children? Surely some research would have found such a company? Metodo 3 had no previous experience in that field of investigation.

Duarte Levy and Paulo Reis presented a run-down on the previous work undertaken by this agency. They had no previous experience of dealing with cases of missing children, their work having been focused on clients from the commercial and industrial sectors, dealing with such issues as money-laundering and security. Based in Barcelona, Metodo 3 was responsible for the new phone line set up after an appeal for information from the McCanns. The Portuguese police had not been consulted about this phone line.

So, what did Metodo 3 do for the McCanns? This information from Duarte Levy

November 10th 2007: An Irish citizen on holiday in Bosnia contacted Metodo 3 to report that he had seen Madeleine in a Bosnian city. Clarence Mitchell said this sighting was being taken very seriously.

November 20th 2007: A woman gives a witness statement to Metodo 3, stating that she had seen Michaela Walczuch, Robert Murat's friend, in Morocco, close to where Madeleine had been sighted.

Ah yes! If nothing else crops up, point the finger at Robert Murat!

December 22nd 2007: Metodo 3 admits never having known where Madeleine was, although they had assured that they would have Madeleine home by Christmas.

December 28th 2007: Metodo 3 comes up with two witnesses who say they had seen Robert Murat in the vicinity of the McCanns' apartment on the night she disappeared.

Names of these witnesses? Payne and Tanner by any chance? None of the local people saw Robert Murat that night.

February 23rd 2008: Metodo 3 detective who had been involved in their hunt for Madeleine, is arrested for theft of cocaine from a police warehouse in Barcelona.

March 13th 2008: A detective working for Metodo 3 in Morocco is alleged to have paid witnesses to say they had seen Madeleine, according to a senior Moroccan police officer.

In spite of all of the above, Kate McCann states: "..we maintain good relations with Metodo 3 today." Why? Suspected of theft of cocaine? Money-laundering? Paying witnesses? Suggesting that they would have Madeleine home by Christmas and then owning up to the fact that they never had any idea where she was? Perhaps, Kate and Gerry need to maintain good relations with that cheap (that's what Kate said!) bunch of detectives because of what they might have to tell about their so-called "investigation," into Madeleine's disappearance?

I'd love to know what those "significant strides," were that Kate McCann mentions, but does not describe. She is quite descriptive in her details of what a paedo might be doing with her daughter and at times the minutiae of her daily life in Portugal, but not about the work done by Metodo 3 in the search for Madeleine. We know that on the day she disappeared, Madeleine had been wearing clothes from Gap and Monsoon, but we don't know what Kate McCann considers to be significant in Metodo 3's search for her. Apart from the many false sightings reported by Metodo 3, too many to mention, what did they do?

What were those "significant strides."? None that I have seen being reported. Perhaps it's all very sensitive information that will now be handed over to the joint teams of Portuguese police and Scotland Yard who will be reviewing the files? Somehow I don't think the file they might hand over would be very thick!

I wonder if Kevin Halligen also made "significant strides," for his money! He disappeared with £300,000? Well, he definitely wasn't cheap!

So, come on Kate McCann, what exactly did Metodo 3 do that was so significant because in your place, I'd be downright embarrassed to admit any connection with that bunch of cowboys!

Complaint against the BBC upheld: Gonçalo Amaral did not use offensive language about the McCanns 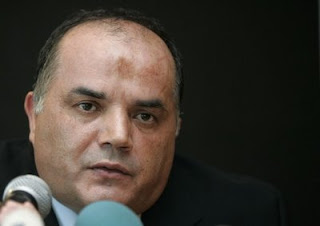 The BBC's Editorial Complaints Unit has published its ruling on complaints that one of their reporters had misquoted Gonçalo Amaral outside the court in Lisbon.

The programme included a brief exchange between a reporter and Gonçalo Amaral (a former policeman who had worked on the disappearance of Madeleine McCann and had since written a book on the case). One word in the exchange was bleeped, and the report gave the impression that this was because Sr Amaral had used offensive language about the MrCanns. A viewer complained that this was inaccurate and unfair to Sr Amaral.

Outcome
The reporter's belief, reinforced by others on the programme team who viewed the recording, was that Sr Amaral had indeed used an English phrase which included an offensive term applied to the McCanns. On further examination, however, it became clear that Sr Amaral had been speaking Portuguese, and that an inoffensive phrase had been misconstrued. Upheld

Further action
The Editor of the programme has discussed the outcome with the producer and reporter involved. In future, the team plans to use interpreters if clips from interviews are unclear.