James Murray penned this scoop for the Sunday Express.

DETECTIVES have been given a photo which appears to show Madeleine McCann with an abductor.
The Sunday Express was passed the picture independently but Scotland Yard appealed to us not to publish it while it continues sensitive global investigations into the missing girl.
Officers were happy for us to describe the potentially key evidence which shows a healthy fair-haired girl aged three or four in pink trousers, a green top and a blue hat.
The child is walking along a road, possibly near a port or airport as there are many people with suitcases in the area. It is sunny with a palm tree in the background.
The photograph was allegedly taken in Brazil in June 2007, a month after Madeleine, three, was snatched from a holiday apartment in Praia da Luz on Portugal’s Algarve coast.
The girl is holding the hand of a swarthy foreign-looking man aged about 50 with long dark hair and a beard. He is wearing cut-off jeans and a green T-shirt.
Nearby, another man in checked shorts and a black T-shirt is pulling a red suitcase. There is no sign of a woman and the child looks out of place with the older men.


Pamalam, of Gerry McCann's blogs was sent emails from a person in Brazil on January 11th and January 14th, seemingly from someone who thought that her web site was an official one for the McCanns. (Emails posted on Pam's site)

One of the emails included this photo:

And there they are! As described by intrepid journo, James Murray, who told Lord Leveson that he always researches his story, the girl is holding the hand of a 'swarthy,' man who is wearing cut-off jeans and a green T-shirt. Check!

And the little girl in the image, a healthy (how can he tell?) fair-haired girl aged three or four in pink trousers, a green top and a blue hat. Yes, she's there! Check!

Nearby, another man in checked shorts and a black T-shirt is pulling a red suitcase. Yes, three out of three! There he is! I do believe we have the right photo! This is the one James Murray must be referring to, the one he cannot publish, which I'm sure he did some research on before the 'Shock,' story was plastered BIG on the Sunday Express front page!

But hey! Lookie lookie! I have another copy of this photo. No, nobody sent it to me, either intentionally or by mistake.

It's not as clear, but it does appear to be the same scene with the same people. Yes, child dressed as above, described by Mr Murray. Two men? Check!

Will someone please tell James Murray that Ibiza is not in Brazil?! Mr Murray, Ibiza is in Spain, that land mass just below France on your map of Europe! Image number 2 above is from a BBC news article of Saturday 30th June 2007 when Spanish police evacuated Ibiza's airport after a Basque newspaper received an anonymous bomb threat.


A spokesman for Scotland Yard said: “An image has been passed to us and it is being assessed.”

Save time and money, just look on the BBC's web site!

The Yard may send the picture to FBI imaging experts in America for an opinion.

Well, if they do, I do hope they report the findings of the FBI's experts. I'm sure they won't ask me for my opinion, but it sure does look like that photo was taken in Ibiza. Ibiza de Janeiro the next holiday hot-spot?

Hope this helps, James, though I'm sure you've been alerted to the news as told by thousands of highly amusing messages on Twitter! 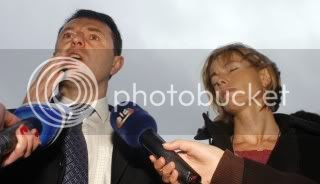 Joana Morais has translated the emails from Brazil, which were received by Pamalam. Joana notes that the Portuguese is poorly constructed grammatically, with several spelling errors. She also indicates that the passport number given by the sender would indicate that he is from the Czech Republic.

Thank you Joana and Pamalam.

Posted by AnnaEsse at 14:39 No comments: