Ken Thompson got on his bike and found his son Andrew 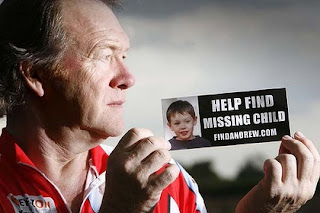 Andrew Thompson was three years old when he was abducted in Sydney by his mother, Melinda Stratton, on April 24, 2008, after a custody battle.

Ms Stratton eluded the Australian Federal Police, Interpol and missing children's organisations until she was picked up on Monday after attempting to enrol Andrew in school.

Noticing the six-year-old's passport had expired, the school's principal ran a security check and discovered the boy was the subject of more than 180 Interpol alerts.

Mr Thompson quit his job in May to cycle across Europe on a public crusade to find his son.

Ken Thompson went out there in the world and physically searched for his son, handing out posters, leaflets and bumper stickers as he cycled through Europe. He actually went to the places where his son might have been taken. He didn't set up a fund and hire dodgy detectives who had no previous experience of finding missing children. He wasn't working very hard doing other things!

When the McCanns' private detectives issued a statement to the effect that they thought Madeleine was being held in a 'hellish lair,' in one of the, 'lawless villages,' within 10 kilometres of Praia da Luz, did the McCanns or even their detectives rush out there to comb those villages to find her? Not that I am aware of. The area covered by those villages within a 10 km radius Praia da Luz seems like a rather smaller search area than the whole of the UK and mainland Europe, but when the McCanns went back to Praia da Luz, did they get on their bikes and trundle round those villages? No! They were busy doing other things, like being photographed gazing out to sea, thinking about their missing child.

‘I didn’t know where in Europe he might be,’’ Mr Thompson told Macquarie Radio from Amsterdam on Thursday morning, having just arrived in the city.

‘‘I just knew Europe was the most likely place, so I decided I would do whatever I could do to raise public awareness to Andrew, and to some other kids who are missing in Europe as well, by riding a bicycle and just trying to generate as much media interest as I could in Andrew.’’

Europe was the most likely place? A rather big place, but Ken Thompson's way of raising awareness was to go there, not set up a fund and ask for donations and plan 100 days, 500 days and 1000 days events with any z list celeb who was willing to lend their name to a media campaign by parents who left their three small children alone in an unlocked apartment in a foreign country.

A family friend, Robin Bowles, said police had contacted Mr Thompson advising him that his son was safe with welfare officials and his former wife was in custody. Arrangements for her extradition were due to be raised in a court appearance yesterday.

"Ken's ecstatic, emotional, relieved, overjoyed and still in a total state of shock," Ms Bowles said. "It is no secret there were fears for both Melinda's and Andrew's safety and the longer time went on, the fear grew deeper within Ken that maybe he'd never see his son again. He wants to see him. He can't wait a moment longer."

Ms Stratton fled Australia four months after she and Mr Thompson failed to reach a custody settlement. She flew with Andrew to Germany, then vanished. In a letter to her family, she claimed she was forced to flee after losing faith in the Family Court over its handling of serious allegations she levelled against her former husband.

But in December 2008 Ms Stratton successfully lobbied the Family Court to lift a ban on identifying Andrew and his plight.

In granting the order, the court allowed Mr Thompson to release a psychiatric report – compiled before his former wife's disappearance – revealing she had a paranoia disorder that severely impaired her ability as a parent.

Mr Thompson said: ‘‘He is safe. We’ll hopefully now get him back to Australia and then Melinda and I can resume the process that needs to be resumed, that was started in 2008."

See, that's how you do it if your child is missing. You get off your butt and go to the places where the child might be found. This year, Gerry McCann got on his bike and rode up and down Scottish hills in record time, we're told, to raise money for the Find Madeleine Fund. He might have done better to have been out there searching when his child first went missing or to have got on his bike when he visited Praia da Luz and cycled round those 'lawless villages,' handing out leaflets and photos. Now, why didn't he do that? How much does it cost to hire an effin' bike for a few days? A great deal less than the £500,000 paid to Kevin Halligen of Oakley International, now fighting extradition to the USA on charges of fraud and money laundering!

Gerry went to America, he visited the Pope, he did the grand tour of Europe and had his piccie taken, but he didn't get on his bike and search those areas where the private detectives thought Madeleine was being held. I guess it was a bit like the night his daughter disappeared: he was busy doing other things.
Posted by AnnaEsse at 10:05 3 comments: