Roll out the McCanns! Somebody mentioned the word "abduction."!!! 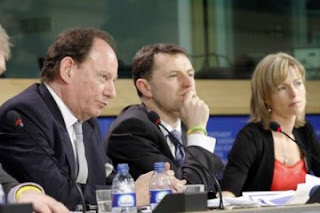 So, there they are today, the "responsible parents," who left three very young children alone in an unlocked apartment in a foreign country, being presented as the instigators of a system they tried to replace with one that wasn't even their own, one they just tried to hitch their wagon to! I guess they will draw more public sympathy than a photo of Rachida Dati, the French Justice Minister who developed the above four criteria which their own child's case didn't meet! Hey ho!
Posted by AnnaEsse at 13:47 6 comments: