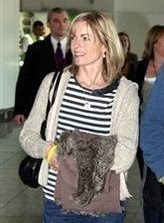 Oprah did everything to make the public cry. The tears were counted and now the television show is expected to bring in a new wave of Maddie sightings. Meanwhile, the FBI confirms that it only cooperated with the Portuguese and British authorities and that the “McCanns should have been suspects from first moment on”. Finally, the alarm wave in the Algarve because of the McCann case paedophiles is useless.

During the recording of the show with the largest audience on North American television, the “Oprah Winfrey Show”, last Friday, a tearful Kate McCann stated once more that she believes her daughter is alive and somewhere in the world, after having been abducted from the room where she slept in the tourist resort in Praia da Luz, in Portugal.

After a long moment of preparation in the backstage, Kate McCann even cried in front of Oprah, the star host, again, lamenting that she didn’t recognise her daughter in the images that were presented on a giant screen, and where a Maddie was shown very different from what has become normal to see in the media since the child disappeared on the 3rd of May 2007: the child now appears dressed in blue, looking more tender and sad, as if she had endured long captivity.
The child’s new images, with the look that she would have at the age of six, were created by experts at the National Centre for Missing children and were presented to Kate and Gerry McCann before the show’s recording, during the visit that they made to that institution as soon as they arrived in the United States.

The National Centre for Missing and Exploited Children, which Gerry McCann had already visited in July 2007, is a private non-profit organisation that does not depend from the North American authorities, as an FBI spokesman told 24 horas.

Sitting next to the North American television’s star host, and in front of a mainly feminine audience, which had been previously prepared for a show “with lots of emotion”, as Oprah described it, Kate McCann explained what the family’s life has been like since Maddie disappeared, emphasizing the twins’ suffering over their sister’s absence.

The real star of the show that will be broadcasted in 144 countries at the beginning of May, Kate told Oprah that she felt Maddie was still alive and that although she didn’t recognise her in the new images, she would be able to recognise her on the street if she crossed her, which didn’t fail to produce some emotional sighs from the public.

The “Oprah Show”, which will also be broadcasted in our country, has still kept part of its mystery, as not even journalists were allowed to watch the entire recording. The final programme will also include images that were recorded in the Rothley house, where Maddie’s room can be seen, tided as if the child could return tomorrow, and Kate playing with twins Sean and Amelie.

Very special relevance is equally given to the documentary that Channel 4 will broadcast on the seventh of May, in which the McCanns will once more launch the idea that an abductor took Maddie from the bed where she slept in apartment 5A, that was occupied by the couple during the vacation that they spent in Praia da Luz, in the Algarve. The new “suspect”, who has nevertheless been identified in the investigation files, is allegedly a Mediterranean looking male, someone who looks Portuguese, and he was seen staring at the apartment where Maddie disappeared from.

As the production stressed, the programme had all the ingredients to please the public that is normally targeted by the “Oprah Show”, and the audience that was at Harpo Studios on West Washington, near central Chicago, ended up becoming emotional over the two women’s tears. “Oprah and Kate were very emotional. The girl’s mother cried at least twice, and even I cried”, 24horas was told by a 47-year-old American, a mother and an unconditional fan of the show: “It’s very hard to get tickets for the show but when I heard it was the McCanns, I spent several hours on the phone to get them.”

Harpo Studios, the only in the world owned by an Afro-American woman, are almost exclusively used to record the Oprah Show, where the public, after requesting their tickets a month earlier, is chosen, searched and checked by a security team at the entrance.

The publication of images of how Maddie might look today, as well as the presence of her parents, Kate and Gerry McCann, on the Oprah show on North American television, may prompt a new wave of sightings all over the world. The alert was given in England today, by an officer with the British police, citing the example of what happens every time someone close to the family or the couple’s spokesman himself, Clarence Mitchell, make the media publish news about a possible abduction and the child’s exit to a foreign country.

“With the publication of the recent images, sightings in the country and abroad have started again”, the officer says, pointing at the news that an English couple saw the child in Malta, as an example: Brian and Glenice White, a retired couple, stated to English police that they saw Madeleine on the 14th of March on a square in La Valletta, the capital of Malta. The couple described a blonde child that played in the company of a “very dark” couple who left when they felt they were being watched.

In Portugal, despite the investigation into the disappearance of Madeleine McCann remaining in a drawer, the PJ is also worried about the impact that the presence of Kate and Gerry McCann on the Oprah Winfrey show will have, as several inspectors from the CID in Portimão confirmed to 24horas.

“The McCanns should have been suspects from the first moment on”

24horas asked Richard Kolko and Ross Rice, from the FBI in Washington and Chicago respectively, as well as other experts at that North American organisation, to comment on several aspects of the Maddie case and the presence of Kate and Gerry McCann on the Oprah Show.

“Kate and Gerry McCann, as well as their seven English friends, should have been treated as suspects from the first moment on, and only seen as victims when all doubts about them were cleared.” This was the conclusion from an FBI abduction expert, who was contacted by 24horas.
While in England Kate and Gerry McCann were still boarding their plane to the United States, FBI members, at the request of 24horas, analysed the inquiry’s documents from the process, and stressed, among other elements, what they called the “obvious lack of cooperation” from the couple.

For that expert, who is used to dealing with abduction cases, it is difficult to understand that the head investigator was removed and the case remains archived, because “the more time goes by, the harder it will be to find the truth.”

The fact that the “crime scene” could have been contaminated in an innocent manner intrigued the expert, who further stressed that “one of the clues that should be reviewed is precisely that one, to determine how, and by whom, the apartment was contaminated”, adding as an example that “from the moment that there is blood, and presuming there are no other victims”, it’s important to determine what product contaminated the samples.

When questioned about a possible abduction for paedophile purposes, the expert confirmed what the PJ had already said: “Madeleine doesn’t match the profile of a victim that a paedophile would target.”

FBI only cooperated with Portuguese and British authorities

When asked to comment on the recent images of the child that were divulged in England and in Portugal, the North American experts underlined that until today, there has been no cooperation with the couple whatsoever. The FBI only cooperated normally with the Portuguese and British authorities, recalling, for example, the comparison analyses that were made between Madeleine’s DNA and a child’s cadaver in Texas.

Both agents further confirmed that until now no FBI expert took part in the creation of the images of Madeleine that the couple publicised in England.

Paedophilia: Alarm in the Algarve is useless

According to a source at the Public Ministry, in the “Maddie” case, and contrary to what has been publicised, the list that arrived in our country, concerning foreign citizens who were identified as paedophiles or as allegedly matching the typical profile of a paedophile, remains in the hands of the Portuguese authorities but was not handed over to the journalists in the DVD that the Court of Portimão delivered after the process was archived.

The DVD that was delivered to journalists by the Court of Portimão does equally not divulge the identity or details of any Portuguese sex offender, the data having been removed from the process to preserve their anonymity, although they all are part of the PJ’s archives, without exception.

The list includes the names of British citizens that live in Portugal, or might have passed through the Algarve, and are referenced as having committed or having been accused of crimes of a sexual or paedophile nature. Another list, which is considered to be more “delicate”, includes individuals that have never committed any crime but who, according to the English authorities, match the typical profile of a possible paedophile.

It was actually the risk of this last list being divulged that prompted the English authorities to hire law firm “Advogados Morais Leitão, Galvão Telles, Soares da Silva & Associados”, which requested the Court of Portimão to maintain the judicial secrecy over the contents of the English documents, alleging that the major concern of the British authorities was “the physical integrity of condemned sexual offenders or alleged sexual offenders”.

The president of the “Association of Chief Police Officers” (ACPO) himself, Ken Jones, recognised to joint prosecutor Melchior Gomes that “a major part of this material is made of information that has not been proved, concerning named and identifiable individuals”, Ken Jones writes, adding that its publication would impact “their physical safety”. The British officer was equally worried about possible lawsuits against the authors of said list, as the criteria that are used for “selection” are not very clear and often based on anonymous complaints that are never investigated or proved.

Posted by AnnaEsse at 20:20 No comments: